There is a lot to celebrate about being a Canadian on Canada Day, but involvement in the James Bond film series is not one of them. The country has been the butt of a few jokes in the franchise so far, and on one or two occasions has been airbrushed out of Bond history. Here we take a look at the onscreen appearances of Canada and Canadians in how they have been treated by the franchise.

The first appearance of Canada is in the second film, 'From Russia With Love'. Facing off against SPECTRE villain Kronsteen (representing Czechoslovakia) is Canadian Grand Master MacAdams (played by Peter Madden). When SPECTRE requires Kronsteen at once, he plays a single move that forces MacAdams to concede and lose the match and the tournament with "a brilliant coup". Defeat for Canada. 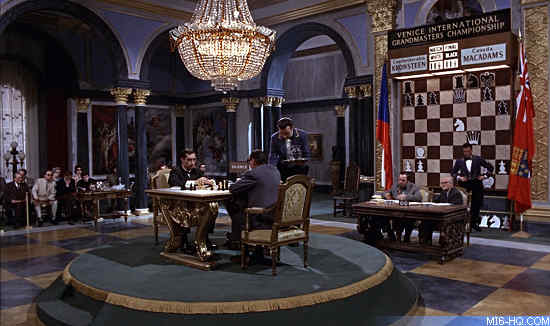 In 'Thunderball', M is about to assign James Bond to Canada for the hunt for SPECTRE and the stolen nuclear bombs. But 007 does not want to go to the Great White North:
M: I've assigned you to Station "C" Canada.
James Bond: Sir, I'd respectfully request that you change my assignment to Nassau.
M: Is there any other reason, besides your enthusiasm for water sports?

When a shuttle is hijacked in the pretitle sequence of 'Moonraker', the 747 is destroyed mid-air over the Yukon (Canada).

The hockey shirts worn by the goons in 'For Your Eyes Only' were from the Montreal Canadiens and Toronto Maple Leafs, but the production removed the logos from the shirts to 'de-Canada' them.

When Xenia needed to steal the identity of a high-ranking officer, the original draft script for 'GoldenEye' saw her lock lips (and legs) with an American Admiral. For the end scene of the film, the production needed the assistance of the US Marine Corps, and in order to return the favour, the nationality of the gullible Admiral was changed to being French. However, the French were giving permission to film the new Eurocopter on a French Navy frigate, so the easily duped Admiral changed again, this time to being Chuck Farrel - a Canadian. The Pentagon's 'Hollywood Liaison' Phil Strub wrote to the producers: "We appreciate your changing the identity of the U.S. admiral to a foreign officer and your including dialogue recognition identifying the Marines."

For the coda at the end of 'Quantum of Solace', Bond tracks down Vesper's duplicitous boyfriend Yousef, who is up to his tricks again. This time, the love rat's target is Corinne Veneau (played by Stana Katic) - a Canadian Security Intelligence Service (CSIS) office. Bond intervenes before she can be blackmailed into giving away Canadian state secrets.

Most recently, the Danny Boyle version of Bond 25 was to have filmed extensively in Canada. Some sets were being constructed in Canada when the director departed the production for "creative differences." New hire Cary Fukunaga scrapped the script and location for the eventual film, 'No Time To Die'. Whether we will ever get to see how Canada was to be used in the abandoned Boyle version of the film remains unknown.