Six stunning stories, featuring the world's greatest spy! Moneypenny has been kidnapped, and the mystery of who has her, and what they want, will only be revealed when (if?) 007 is able to complete his incredible missions. That is the set up to a new upcoming special from Dynamite Comics.

James Bond in "Reflections of Death" is a 128 page hardcover of nonstop thrills and intrigue. With a framing story by Vita Ayala and Danny Lore, over 20 total creators will collaborate to contribute stories that both stand on their own and tie into an overarching narrative. The central figure through the anthology of case files is Moneypenny. She's been kidnapped. and the mystery of her captors and their demands will only be revealed when, or if, 007 is able to complete his missions. While Moneypenny herself may have some surprises up her sleeve.

"We're incredibly fortunate to work with so many talented creators, and of course they all want to write one of the most crucial characters in modern fiction!," said Nick Barrucci, Dynamite CEO and Publisher. "Just in time for the new movie, for fans to enjoy a bounty of Bond too!" 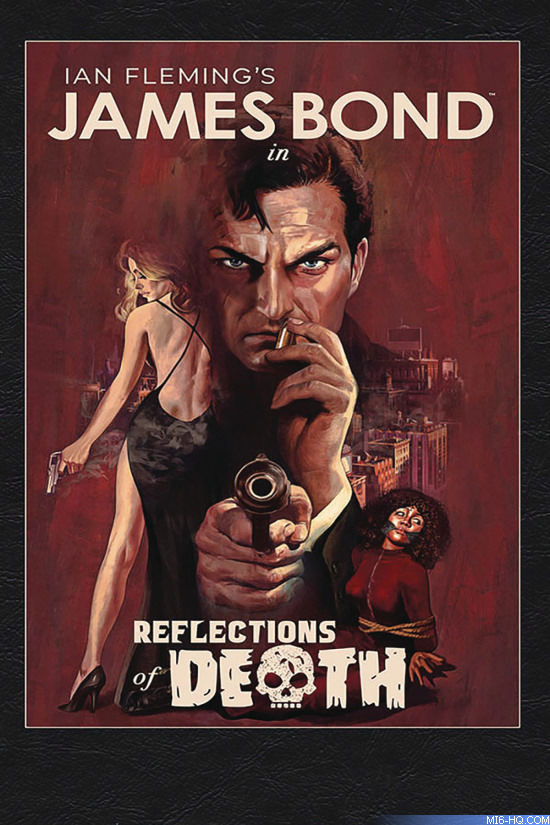 Dynamite asked each writer to distill what they think makes Bond such a timeless character and compelling to write.

Benjamin Percy - "Bond epitomizes cool. He wears the sharpest suits, drives the sleekest cars, owns the wildest gadgets. Men want to be him, women want to be with him. He never shies from danger. He always says the right thing, usually with a confident smile curling the corner of his mouth. He’s aspirational. Through him, we can dream of shrugging off our insecurities and making an impact in the world."

"But that veneer of perfection hides a relatable flaw. He is emotionally scarred, numb, cold. This is a person who does horrible things for a greater good. So he drinks liver-deadening amounts of booze and sleeps around and discards those close to him so that he can armor himself against horrors."

Vita Ayala - "To me, what makes James Bond timeless is that he is that he can adapt to any situation, smoothly and with a cool no one can match. What that does, on a meta level, is make him able to be placed in any context, because the core parts of him are his resolve, his suaveness, and his ability to alter himself to the situation at hand – and all of THAT is timeless."

"For me, what makes him so compelling to work with is his complexity. James is a man who has dedicated his life to protecting his country, to SAVING lives, but he does it often by killing. He is a man who uses his charm and sexuality to achieve his goals, but there are tender, very vulnerable parts of him that he exposes to pain to do so. I love spies as a concept, and James is the epitome of Spy."

Danny Lore - "Bond is enduring because he's all about competence and style; even when he's wrong, he does it with such panache that we want him to come out on top. He's the calm in the storm that solves the problems that feel too big for one guy to solve, and does it while barely messing up the hem of his trousers. That kind of ingenuity and class and charm sticks with us as readers and as writers--in part because we know that he's entangled in darkness while still being able to don that classic smirk."

Greg Pak - "I love Bond stories for their glorious combo of sci-fi and spy thriller, their dry humor, their emphasis on a cool professional doing the impossible, and their joy in mind-blowing action set pieces. I love the Odd Job stories I've been able to do for throwing a cocky, passionate improvisor in the mix and seeing him drive Bond out of his mind. I'm hugely excited to get another bite of the apple with this story and hope both Bond and Odd Job fans enjoy reading it as much as we're enjoying making it."

Andy Diggle - "It's all too easy to feel hopeless and helpless against powerfully malevolent forces in our world, but James Bond encapsulates the idea that one man - one person - can make a difference. He endures, he persists, and he prevails. It's clear in Ian Fleming's work that Bond has a strong sense of moral outrage at the villains' disregard for human life. He knows right from wrong, and he's fighting the good fight for “us.”

Gail Simone - "It’s an interesting thing, because I read several of the Fleming books before ever seeing a proper Bond film, and I liked that spy. He wasn’t incredibly noble, he didn’t have a lot of human empathy. But he was the man for the job. He was a human being who had to go to some dark places. That’s my favorite Bond. I love the stunts and glamour, I love the locations and gadgets, all of that. But the Bond I most enjoy is the guy who goes where the snakes are, so the rest of us don’t have to."

James Bond in "Reflections of Death" will be published in March 2020.