A new James Bond comic book series was to be announced today. For reasons we are about to explore, that is not going to happen today, and we may never get to see it.

First, a little bit of context. 'Comicsgate' is a campaign in opposition to perceived "forced diversity" and progressivism in comic books - including the creators hired, the characters depicted, and the stories told - which proponents argue has led to a decline in both quality and sales. The name is derived from 'Gamergate', a similar movement related to video games. Its members present it as a consumer protest, primarily advocating their views on social media; some have produced books intended to reflect the group's values. It has been described by critics as part of the alt-right movement, and as a harassment campaign which "targets women, people of color, and LGBT folk in the comic book industry". It has been blamed by critics for vandalism and threats of violence against others.

Dynamite Entertainment have been licenced to produce James Bond comics by Ian Fleming Publications since 2014.

It was revealed in this past week that the CEO of Dynamite Entertainment, Nick Barruci, has been working alongside the Comicsgate group. The leader/spokesperson of Comicsgate, Ethan Van Sciver, broke his silence that Barucci, and Dynamite, have been supportive of their campaign since 2018. After Van Sciver's firing from DC Comics, Barucci extended support. "Nick reached out to me and said, 'wanna do some business? You wanna make some money? We'll help you out where you need. I can advise you, I can tell you where to go. I can help you learn to make your own comics,'" he told his audience via a live stream.

Others revealed that Comicsgate publications had been fulfilled by Dynamite's infrastructure. This makes Dynamite the only comic book publisher to back the movement. The mainstream comic community has denounced the group on multiple occasions.

All of this was revealed a day after Dynamite publicly backed crowd-sourced campaigns for Comicsgate alternative covers to their properties to - as Van Sciver explained - "put a little more money in [their] pockets."

Multiple comic book creators took to social media to express their objection to Dynamite aligning with such a group, with some refusing to work for the company until a satisfactory resolution had been met. Some comic book retailers also publicly stated they would not be carrying any Dynamite titles due to their support for Comicsgate.

The timing could not really be worse, as [email protected] is currently taking place and Dynamite was due to host 3 live panels today. One of the panels was to be focussed on 007 to discuss Dynamite's current James Bond projects and to reveal their latest title:

James Bond – 007 in Comics! (Thursday July 23 – 11 AM PST)
Current writer Danny Lore (Ironheart) is joined by preceding 007 chronicler Greg Pak (Star Wars, Incredible Hulk) and Reflections of Death contributor Mark Russell (Red Sonja, Swamp Thing). Editors Nate Cosby and Matt Idelson chime in as well. And the real surprise guest is… Steve Orlando of Martian Manhunter and Wonder Woman fame. Who may or may not be discussing a new series with more details coming soon, such as in this panel. The bursting panel go back and forth, sharing their interpretations of Bond as a character and their own works, past, present and future.

A new James Bond project that was to be announced was to be by writer/artist Rahsan Ekedal. In a revealing tweet, Ekedal pulled any future work on the series and also confirmed that Dynamite had put projects on hiatus back in March.  He wrote: "So I reached out to my editor at Dynamite about this [Comicsgate] situation and said that I can’t be associated with a company that allies itself with a hate group. I just want my followers and other creators to understand that I condemn [Comicsgate] and am furious with the company." Adding, "I was two issues in on a James Bond miniseries with them but it has been on indefinite hold since March and I haven't done any further work on it since I finished colors during the lockdown." 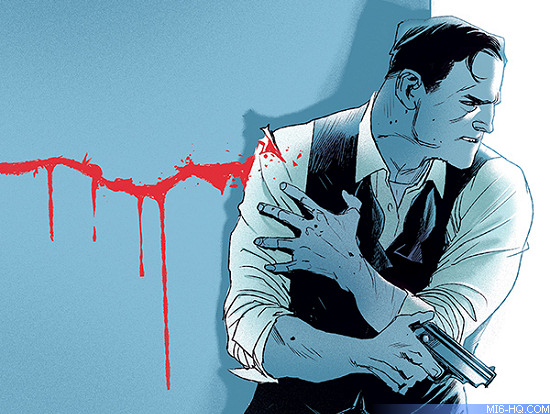 With their creatives pulling out, it was no surprise that the panel was canceled last night. San Diego Comic-Con, who run the [email protected] event, simply posted: "We regret to announce that this program has been canceled."

Dynamite has been prolific in their 007 output, releasing multiple original comic book series, a Bond origin series, and graphic novels faithful to Ian Fleming's books despite dwindling first-run sales figures. But a lot remains uncertain. Will Dynamite assign a different artist to continue the new series from issue #3 onwards? Will the new series ever see the light of day? Will Ian Fleming Publications terminate the James Bond licence from Dynamite given their stance?