AS A STUDENT RICHARD SCHENKMAN STARTED THE FIRST SUCCESSFUL JAMES BOND FAN CLUB AND MAGAZINE, DUBBED 'BONDAGE', IN THE USA IN THE 1970S, JUST AS "LIVE AND LET DIE" WAS GOING INTO PRODUCTION. BETWEEN 1974 TO 1989 SCHENKMAN BROUGHT BEHIND THE SCENES NEWS AND DETAILS TO AMERICAN 007 AFICIONADOS, STARVED OF INFORMATION THAT THEIR BRITISH COUNTERPARTS COULD READILY READ IN THE UK PAPERS. IN THE FIRST PART OF THIS INTERVIEW, MI6 SPOKE TO SCHENKMAN ABOUT STARTING THE MAGAZINE IN A PRE-INTERNET ERA, GATHERING MOMENTUM AND MAKING THE CLUB A SUCCESS.

Continuing from Part I...

What was the most memorable interview, or the most memorable meeting with Bond alumni?
There were so many important moments for me. Being able to sit down and do a long, comprehensive interview with Terence Young when I had never seen a long, comprehensive interview with him before. That was a thrill. And to do that on the French Riviera when I'd never even been there before. Or to be able to sit down with Tom Mankiewicz, who was a lovely, lovely man and really challenge him on what I thought was damage he had done to the Bond legacy with the movies he had written, and openly discuss this with him and have him answer honestly. Really - just to know that I was creating a resource that Bond fans were always going to be able to go back to. 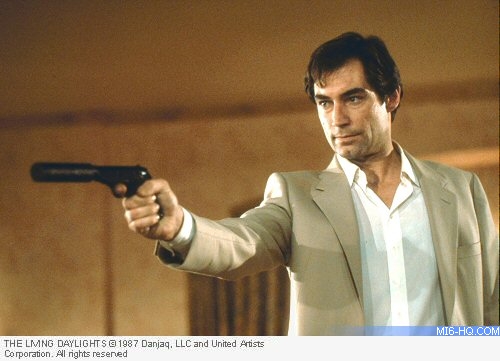 I met Timothy Dalton several times - I guess that was the height of my involvement with the magazine, when he was doing the films. It was a pleasure to meet him. There was this one moment when, instead of treating me a little like an insect who was hovering around and bothering him, suddenly he really understood what was as the core of my motivation here (which was a love a process of the creation of the movies), and that I was approaching it just like a professional and not just a kid. He said, "Oh, I see, I get it. You really want to know all about how these things are actually made because you want to be a filmmaker." I said, "Yes," and from then on he treated me like a professional and he was much more open and it became a more pleasurable experience for both of us. I respected him enormously.

At the same time there were other aspects that were equally thrilling for me. I did my last semester of college living in London, which was a lifelong dream at that point. I started pouring through old newspaper records and finding bits and pieces that Ian Fleming had written for the Times and for other papers that had never been published in the States. To secure the rights to publish those pieces in the magazine was a huge thrill. I knew as an Ian Fleming fan that any other Ian Fleming fans would be so excited to come across those pieces. One of my biggest motivators when I started this was that I wanted more. I wanted more Ian Fleming novels, but Ian Fleming was dead. I wanted more movies but it took them two years at least so there were big waits between films. And other than John Brosnan's book ["James Bond in the Cinema"] about the making of the films up to, I think, "Diamonds Are Forever" or Kingsley Amis's book "Colonel Sun", there wasn't any more. I set myself this task, and so when I was able to find whole swathes of Ian Fleming writings that I could collect and publish, that was a huge accomplishment.

One of the other things I was proud of involved the James Bond comic strip: the British daily newspaper comic strip had never really been published in the United States. I got the rights, got the material, and put together, believe it or not, one of the first graphic novels in history when I collected three of the full-length adaptations into a book that I published called "The Illustrated James Bond".

When John Gardner started publishing his books, I made an arrangement with the publishers that I could market the books to the members of the fan club in advance and arrange for them to purchase them at a discount (again, way before Amazon!). People were able to buy the books at a 35-40% discount and have them in their hands on publication date without ever visiting a bookstore. The publishers had a drop-shipping service. If you gave them a name and address and a couple of dollars for the service, they'd arrange shipping so that it arrived on publication day. That was a service I was very proud of, and in some ways it was before its time.

And I did that sort of thing whenever I could - locate quantity of one collectible or another, negotiate a great price, and make the item available for members. I found this guy who owned a whole box of 1960's Gilbert James Bond figures buried in the back of a toy shop and I was able to make a deal to buy them and make them available to the club members at a fraction of the price you would have to pay a toy dealer. I bought hundreds of gorgeous Italian Bond posters in Rome and sold them to members. I'm just really proud of what we achieved over what was, in retrospect, a very short period of time.

Talk to anyone about Bond and your magazine often gets a mention.
Well, people over a certain age I suppose. That's very nice, if people remember fondly. The other side of it is the showbiz side. How many people, Michael France, for example, who were members of the club when they were kids went on to real careers in film and television? Raymond Benson, John Cork... They read it, they wrote in, we corresponded. Mike actually wrote Bond movies! John did all the behind-the-scenes DVD's. Raymond has written extensively about Bond, including a series of novels... And there are more, honestly. I do wish I was involved in the fan community in a greater sense today, I wish that some of us had kept in better touch. We shared a very interesting time in our lives when we were making important decisions about what we loved, and what inspired us, and what we wanted to be, and it all started with a genuine love for James Bond.