Continued from Part I...

In "Licence to Kill" the decision was made to make a Bond movie that was much grittier, darker and realistic than previous films, with the film promoted as being "Torn straight from the headlines of today's newspapers". In hindsight, do you think the violence in the movie should have been toned down, or was the film simply too far ahead of its time? How much do you think society has changed since 1989?
Well, "Licence to Kill", was really ahead of its time dealing with the drug world- also it was a deliberate attempt to go back to Ian Fleming's original idea of Bond! And, also that Bond and the Baddie should be mirror images of each other. We looked to Casino [Royale] where all this was discussed by Fleming. Well, since 1989 a quarter of a Century has passed! There have been many changes - again it would take me days to give a socio-political dissertation on it all. 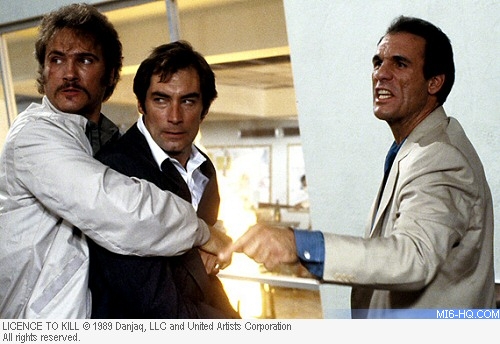 With a key sequence inspired by Fleming's "Live and Let Die", of Leiter being attacked by a shark, literally word for word from the novel at one point (The note left on Leiter's barely conscious body, "He disagreed with something that ate him") it could be argued that "Licence to Kill" is one of the films closest in style to what Fleming originally intended. Were you a fan of Fleming's writing? Had you read many of the novels prior to filming?
Yes, a big fan of Bond and Fleming and read all the novels as well as seeing all the films.

The Bogart impression you did reminded me of something I read about Pierce Brosnan recently, that he watched Cary Grant movies while preparing for the role "Remington Steele" in the 80's, trying to imitate his pace and effortlessness. Did you ever watch Bogart movies and consciously try to learn from his performances?
I watched Bogart, Brando, Spencer Tracy, Cagney, Edward G. Robinson, Jimmy Stewart, Sinatra, Lee Marvin, Pacino, DeNiro. I watched and studied tons!

During the concert you also referred to some of the prank phone calls you made pretending to be Arnold Schwarzenegger when he was getting into politics (Which was hilarious by the way). Did he know about this? When you made the "Expendables 3" with him recently, did you do any impressions of him, or tease him at all about the prank calls?
I told him about my impression but never did it for him... yet. He was not on the set the week I filmed. But I must say the fun I had on the set, and the feel of it, was reminiscent of a Bond film. This was the third film some of the crew had done together and everything was top shelf. Sly was Princely.

In your film and television career you've had the opportunity to work with many talented professionals. Who have been some of the people that impressed you the most?
Too long a list to go into! Actually, you learn from everyone, whether it is about the business end of our work or the artistic end. I would have to write a book to answer this correctly and I have to prepare for a show in New York for over 10,000 people! So, let me say this: one of the most influential people I have met and worked with was my acting mentor Stella Adler, while many have impressed me she was quite unique. Her, Sinatra, Brando and Cubby. 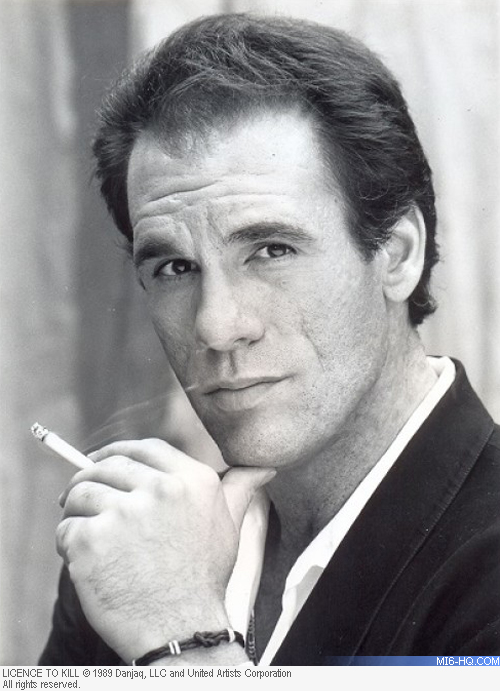 Thinking back to 1976, before the start of your career on film, what things have surprised you the most about working as an actor?
Well not much has surprised me for the simple reason I believe intense preparation is most important and as an actor. I had done over 800 performances on stage before I even stepped in front of a camera. So, not a lot surprised me!

Have you learned anything that you never expected?
Yes, never give up your day job. [laughs] All joking aside I have been blessed and the business has been very good to me but it can be very difficult at times. So when the phone don't ring it's good to have something to fall back on. Ian Fleming speaks of this in his beginning years.

It's interesting you mention that. For nearly six years after the publication of "Casino Royale", Ian Fleming continued to work full time for "The Sunday Times". Even James Bond's creator didn't give up his day job for some time! We talked earlier about Sinatra and the Bond movies. In Jon Burlingame's excellent book "The Music of James Bond" it's mentioned that Sinatra was originally intended to sing 1979's "Moonraker". John Barry recorded a demo with lyrics written especially for Sinatra by Paul Williams. Sinatra listened to the demo and told Williams it was marvellous. Then for some reason it didn't happen... (Ultimately the lyrics were rewritten & Shirley Bassey returned to sing the title song of a Bond movie for a record third time) Can you shed any light on why Sinatra didn't sing "Moonraker"?
Matt Monroe had sung a song, I believe he sung "From Russia With Love" and perhaps Sinatra didn't feel he should go over this territory. My only guess is the stars did not align for this to happen, but it was frequently talked about. It had to have an absolutely organic purpose and not stunt casting even for a singer. Sinatra and Cubby were friends. If the [song] was right it would have happened.

Above: Davi signing autographs and a wide-shot of the grand theatre in which he performed for a receptive Australian audience.

Many thanks to Robert Davi.