How is Daniel Craig the longest-serving James Bond?

Much has been said in recent months in the media about Daniel Craig becoming the longest-serving James Bond actor. The devil, as they say, is in the details. For the purposes of this analysis, 'Never Say Never Again'  (1983) is not included as it is not part of the EON Productions series.

The common metric used in this claim is the number of days between the actors being announced: take the date of their successor's announcement and subtract the date of their announcement. This does make Daniel Craig the longest-serving Bond actor to date with 5,124 days (as of the date of this article) versus 5,118 by Roger Moore. Sean Connery's tenure has the complication of 'Diamonds Are Forever' occurring after he had been replaced by Lazenby in 'On Her Majesty's Secret Service', so for these totals, his tenure is the aggregate of both his periods as 007. 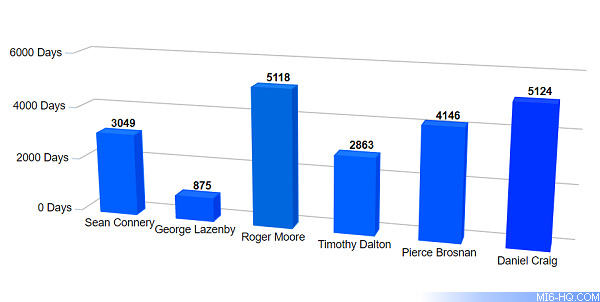 Some have argued that the day that their last film is released should count as their end of tenure (as they are in effect hanging up the holster at that point) but given the long tail of promotional work and the fact that the world does not know who their successor will be yet, they are still James Bond in the eyes of the public. Going by this logic, Craig extends his lead over Moore by a further 237 days.

However, being the longest-serving does not make one the most prolific. By many measures, that honour still belongs to Roger Moore. At the crudest level, he takes the title with 7 official films (Sean Connery 6, Daniel Craig 5, Pierce Brosnan 4, Timothy Dalton 2, George Lazenby 1).

Moore is also top of the charts when you consider the number of combined minutes a Bond actor's run time totals with 886. Sean Connery has 702, Pierce Brosnan has 510, Timothy Dalton has 263, and George Lazenby has 142. Daniel Craig's total stands at 542 before 'No Time To Die'. If that film clocks in at 130 minutes,  his total will increase to 672 - still short of Moore and Connery (Craig has fewer, but longer films). 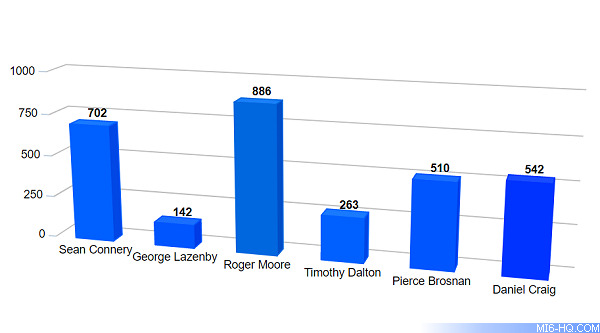 With Daniel Craig announcing that 'No Time To Die' will be his fifth and final James Bond film, it is unlikely that these latter stats will be beaten. But as the saying goes, never say never...