Review: Will Kim Sherwood’s Double Or Nothing rescue Bond?

Writing a James Bond continuation novel (even one that doesn’t feature Bond directly), is no easy task. We might think we know the character well enough, but both the literary and cinematic versions have gone through so many iterations since Ian Fleming first sat down at his desk that the idea of who Bond really is has been coloured by both author and actor alike, leaving us with a slow-cooked cassoulet of a character that almost defies definition.

Just in regards to the literary Bond alone, we’ve seen the continuation authors carefully insert their Bond into Fleming’s timeline, taking great lengths to ensure a direct connection and preservation of Fleming’s character and the events of his novels, while others have created their own versions of Bond that are either a pastiche of Fleming’s Bond, or exist as almost an entirely different character with no connection to Fleming other than in name. 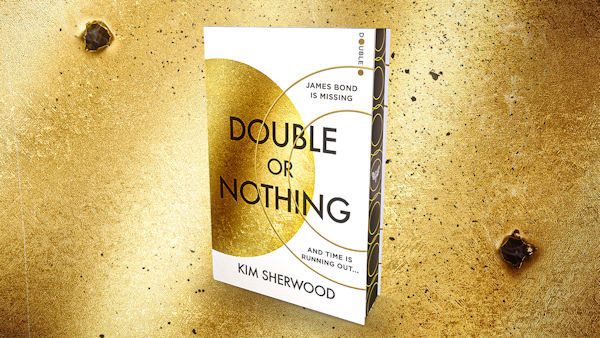 This diversity of depiction is worth bearing in mind when reading ‘Double Or Nothing’, the latest book from Kim Sherwood. Getting Bond “right” is an enormous pressure for a continuation novelist to bear, so, perhaps wisely, Sherwood has steered away from making 007 her protagonist and instead focuses her attention on the latest batch of double-oh agents to earn their licence to kill.

The three new characters are diverse enough in gender, ethnicity, and sexuality to avoid the pitfalls of merely being re-skinned versions of Bond himself and are a refreshing change, especially in the current climate. Johanna Harwood (003), Sid Bashir (009), and Joseph Dryden (004) are all very different characters with their own histories and relationships. This does, of course, open up a lot of possibilities and allows us to explore aspects of Bond’s world that were perhaps closed when merely being viewed through the protagonist’s own narrow lens. There is a promise of discovery here that should whet the appetite of even the most hardened Fleming aficionado. Whether it will quench it, though, is another question.

In exploring Bond’s world, each author will expand it with their own interpretations, bringing in new characters and developing established ones. However, as previously stated, one has to be careful to be sure which version of that world is being explored. The path between slavishly remaining faithful to Fleming’s timeline, or creating something entirely new, can often be a tricky one to negotiate and requires almost surgical precision and a lightness of touch to avoid falling afoul.

Which is my primary criticism of ‘Double Or Nothing’. Sherwood is clearly a talented writer and has brought a lot of new ideas to the table while developing this world, however, one never really feels assured of just which world this is. For example, events of the films and books are referenced interchangeably, as though both co-existing in both at the same time. The events are clearly supposed to be contemporary, if not even a step into the near future, but we also have anachronistic elements, which may not present a problem to a casual reader, but may throw a person who knows the novels intimately. The three main characters are all obliquely related to the cinematic Bond: Harwood being the name of an uncredited writer on 'Dr. No' and 'From Russia With Love', Dryden being the crooked Section Chief in 'Casino Royale', and Bashir being a character from ‘Star Trek Deep Space Nine’, whose principal pleasure involved playing a version of Bond on the station’s holosuites. Fleming himself was known to make references to real-life people in his novels, including (among many others) Ursula Andress, and his own half-sister, Amaryllis Fleming. So, these little meta morsels aren’t out of character for a Bond book, but perhaps not all of these Easter Eggs are as subtle as Sherwood might have hoped; by the time we have Bob Simmons as a lift operator, one feels as though many more might begin to take us out of the narrative. 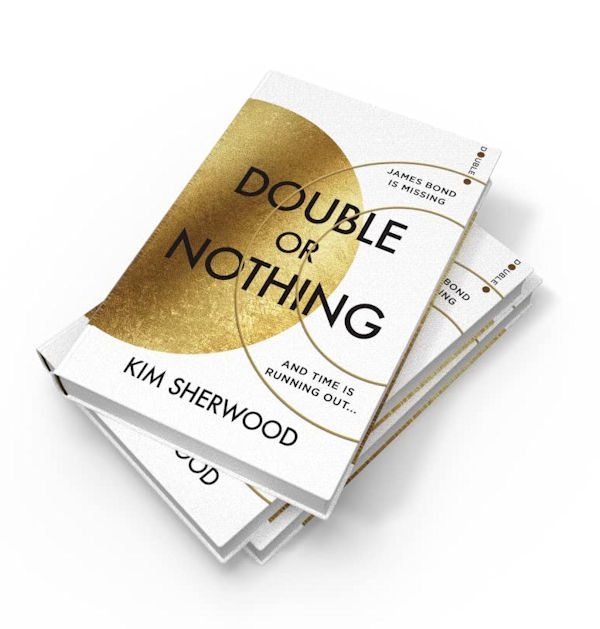 There are, it must be said, a lot of characters to keep up with, some old and some new. The new all have their character traits, and their histories, but none are really as instantly engaging as Bond. The older, more familiar characters have all come a long way from where we have encountered them last. But it is not where they find themselves, or what they’ve become necessarily that might throw you (although there will doubtless be those who take umbrage at some character revelations), but rather how old they are supposed to be. Bond is the mentor and former lover of Harwood’s, but just what their age difference is, what Bond’s age is now, is a little unclear. An example is Mary Anne Russell, who, some readers might remember, makes a brief appearance in ‘From A View To A Kill’ (which was the name of the short story, not the name of the mission, as is erroneously stated in this book), and who was twenty-six at the time of the events. Which would, if we are to accept that this series is set in our contemporary times, with the threat of climate catastrophe looming large over our heads, make her eighty-two. How old that then makes everyone else who is also taken from Fleming’s stories starts to make your head spin. Bond himself, by this rationale, has already received his letter of congratulations from the Queen. That said, a Bond story does ask its readers to suspend more than a degree of disbelief, but that usually extends to the implausibility of villain’s scheme, or the double-oh’s derring-do, rather than trying to figure out how this is all supposed to tie together to the existing novels.

This brings us to the narrative and plot. Sherwood has been very ambitious with undertaking such a mammoth task and has pulled out a lot of stops with the story. Bond mysteriously missing, a love triangle between agents, a mole-hunt at MI6, a sinister organisation, and a billionaire who claims to hold the power of the Tempastates and who will bring us back from the brink of extinction. There is a lot going on here, but Sherwood does manage to somehow keep all these plates spinning - although one occasionally wishes for it to be a little leaner. At times, this reads a little more le Carré than Fleming, especially the hunt for the traitor in MI6, which nods to ‘Tinker, Tailor, Soldier, Spy’.

While the notion of controlling the weather might seem a little ludicrous, it is always worth remembering that Fleming wrote boys' own adventure stories for an adult audience, all the while keeping his tongue firmly in his cheek. Yes, weather control may seem outlandish and have more in common with a different Sean Connery film than the ones we might expect, but no more so than a pincer-handed villain being buried under several tonnes of bird poo. Sherwood also keeps Fleming’s love of locations front-and-centre (although, speaking as a Bristolian, I’m pretty sure you can’t see Clifton Suspension Bridge from the outskirts of Bath). There is something of a propensity to have landmarks fill in for descriptions of places, in the same way that Fleming relied on brands as a kind of shorthand to fill in the blanks of his characters. That said, some of the locations are wonderfully chosen, with The Barbican being given far more love than 'Quantum of Solace' had time to bestow.

Worth pointing out is Sherwood’s voice within the novel. This is obviously the first time that we’ve had a woman writing in the Bond literary universe and it is a welcome change to have female characters that are written by a woman. Bond in general is often seen as a particularly male-dominated domain, with more than its share of sexism and misogyny in the mix, so it is more than time that we had another perspective.

Additionally, we have a great deal more diversity in this novel. Harwood is French-Algerian, Bashir is BAME, and Dryden is of Jamaican heritage. Dryden is also the first openly gay double-oh agent we’ve had, which may ruffle a few feathers amongst the more conservative readership, but positive queer and homosexual representation has been missing for almost all of the Bond novels and it’s about time they were cast as something other than a villain or mixed-up in their minds. Dryden, too, is (like me) deaf in his right ear. Obviously, my own disability made this character a far more compelling one, but it is once again welcome to feel represented in one way or another.

Politically, Sherwood is the diametric opposite to Fleming’s more conservative line. Again, this is representative of the shifting times, where we see billionaires and their follies have a way of harming the world rather than helping it, no matter how much their brand might say otherwise. Sherwood, then, is well-suited to bring the literary Bond up to speed with a more modern outlook and creating a platform from which to expand the series from. 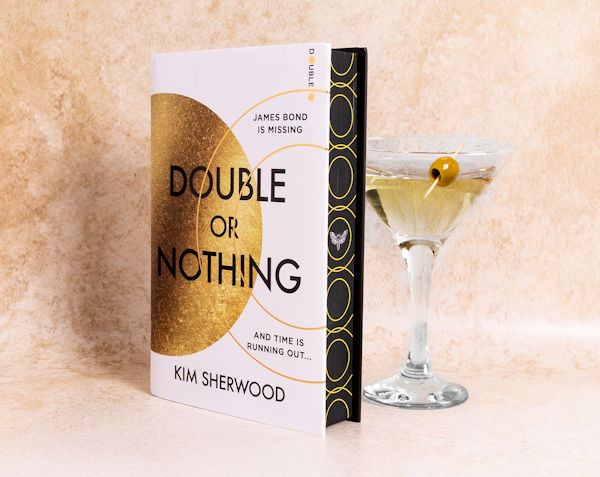 In conclusion, ‘Double Or Nothing’ doesn’t necessarily pull off the kind of easy insertion into the Bond world that Anthony Horowitz achieved with his continuation novels, but there’s definitely more than just a few flashes of gold in the pan. There’s none of the looking down the nose at the material that one might have felt with Sebastian Faulks’ ‘Devil May Care,' or the complete departure from tone and style and setting that was Jeffrey Deaver’s ‘Carte Blanche’, instead there’s a buoyant sense of excitement at being tasked to write a Bond story that we can vicariously enjoy, even if not all of it comes off.

There are some aspects to the book that will almost certainly cause Fleming purists to get a little disgruntled, and some twists that will divide fans, however, this is now Sherwood’s ship to steer and I for one am interested to see where the next two novels will take us.