Some Kind of Book Review

Greg Bechtloff reviews the updated edition of 'Some Kind of Hero'

After what seemed like the longest pre-production period ever, cameras are now rolling on the newest James Bond motion picture epic. Daniel Craig has again taken up the Walther and Omega for what the legacy media keeps telling us is his last stab at the character. The new film is still untitled at the moment but was launched in late April at Ian Fleming’s island getaway Goldeneye in Jamaica.

Bond observers noted that the creative team wanted to acknowledge the sacred Ian Fleming texts by launching Bond 25 in Jamaica. Goldeneye is essentially ground zero for the James Bond legend since all of the novels were written there. Current owner Chris Blackwell has built on Ian Fleming’s legacy by turning the modest island retreat into a luxe resort. Along the way, Blackwell has incorporated his own contribution to the Bond history since he himself was in Dr. No before he hit it big in the music business.

How can we process all this meta-James Bond information though? Fleming, Jamaica, the Blackwell family, a long-running film series and an actor’s supposed last stand?

The answers can be found in the revised version of Matthew Field and Ajay Chowdhury’s thorough history of the James Bond mythos ‘Some Kind of Hero’.  First published in 2015, this new version has been updated to include Spectre and the interim period leading up to Bond 25.

How does that old chestnut go? ‘We only know where we are when we see where we have been’.  That certainly is the case with this book.

Reading ‘Some Kind of Hero’ will put everything that happened in the development process of the 25th Bond film into perspective. All of the drama that seemed to plague this current film has happened to other Bond films in one form or another.

No leading man? Check. Director departure? Check. Rewrite upon rewrite? Check. A polish from a female screenwriter? Check. (No, it's not Joanna Harwood, you need to read this book to find out who it is and on what movie).

I suggest you read the section on ‘Tomorrow Never Dies’ to see how history is repeating itself. Bond 18 did not get a title until the film was underway and was also reported as being ‘in trouble’ and ‘chaotic’. 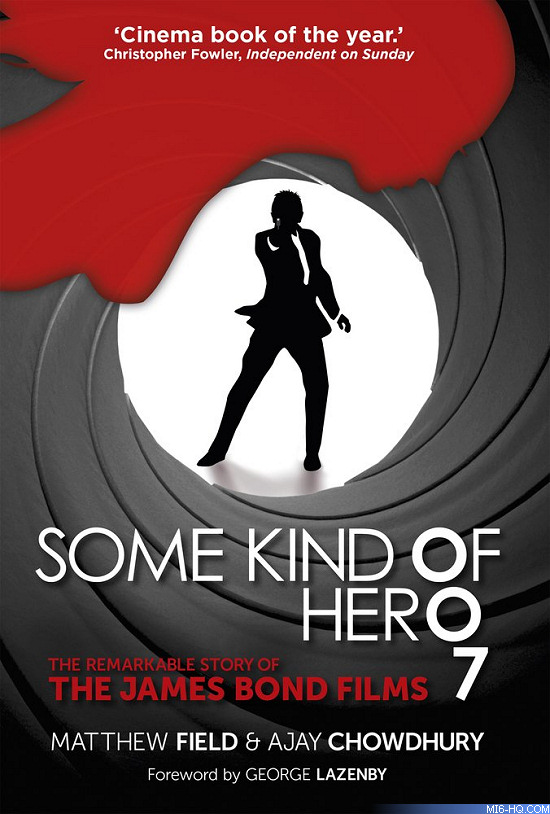 Starting with the genesis of the literary character from the golden typewriter of Ian Fleming, the book spans the complete saga of the James Bond film series.

The book details how Albert Broccoli and Harry Saltzman chased the Bond series rights and then decided to collaborate as producing partners. The story continues with how the producers decided what studio to finance the films and the creative team they assembled to make the first James Bond film.

I will not belabor the point but Some Kind of Hero masterfully sweeps you along from the genesis of the film series to where we are now.

All of the ensuing drama throughout the decades’ is thoughtfully curated. Relying on first-hand research and interviews, Field and Chowdhury have made their opus pretty much the nearly definitive chronicle of the Bond series.

Of particular importance is the section on the dissolution of the partnership between Broccoli and Saltzman. Everyone knows that the producers split in the mid-1970’s but nowhere before has the blow by blow account of the divorce been documented as it is here. That alone makes it an essential read.

Another revelation is the outline of the plot for what was supposed to be the third Timothy Dalton Bond film. That storyline has proven to be pivotal because many subsequent Bond films have used elements from that treatment; up to and including Spectre.

But there is so much more. In certain cases, this book preserves some of the essential knowledge that we are not going to get elsewhere. The DVD’s of Quantum of Solace and Spectre do not have director commentaries. We are probably not going to get them either since DVD’s are so unloved these days. Some Kind of Hero fills that gap. The sections on both those films, tells us all we need to know about the making of those two entries.

Multiply that by all the films in the series and you get the hefty tome that Some Kind of Hero is. But do not be intimidated by the size of this book. It is not a dry academic textbook slog. It is, in fact, a highly readable narrative that will change your outlook on every film in the Bond canon. I guarantee that there is something in every chapter that you probably did not know before.

One suggestion I can offer is that you perhaps pace yourself. Maybe watch every film in sequence. From May 2019 to April 2020 is twelve months. There are 25 films covered in this book (The 1967 Casino Royale is covered in a Bondmania section). You could do two or three a month and then read the sections of that film in Some Kind of Hero.

If I can use another metaphor here, it would kind of like treating yourself to a sumptuous steak dinner. The movie is the steak; luscious, tasty, familiar and satisfying. The chapters in this book are like the Cabernet Sauvignon you consume with that steak, challenging, maybe a little mysterious and slightly intimidating. But the interaction between the two is something that you will not forget.

Do yourself a favor and read this book.

NB: Full disclosure: I provided some underlying research for this book.

Some Kind Of Hero - Book Launch