The Sanest Guy In The Room

The Sanest Guy In The Room, by Don Black - Reviewed by Matthew Field

“I have never been a fan of autobiographies,” writes Don Black in the opening paragraph of his new memoir, The Sanest Guy In The Room.  Described by Robbie Williams as “the Pele of lyricists” Black does not waste a syllable and eliminates the unnecessary, taking the approach of a lyric writer to compress and get to the nitty-gritty. Black authorised a biography 20 years ago but this new book is his first attempt at telling the story himself. The title was coined by journalist Mark Steyn, who used the phrase to describe Black’s laidback, amiability which distinguishes him from more neurotic musicians.

Black is known to 007 fans for penning a total of six songs for the James Bond franchise; Thunderball,” “Diamonds Are Forever,” “The Man With The Golden Gun,” “Surrender,” “The World Is Not Enough,” and “Only Myself To Blame.” But he is also the man behind some of the late twentieth century’s greatest musical numbers and one of Andrew Lloyd Webber’s frequent collaborators.

Born in Hackney, London in 1938 Black has worked with some of the world's leading composers and artists including Michael Jackson, Quincy Jones, Barbara Streisand, and Henry Mancini. He has written songs for musicals including Sunset Boulevard, Tell Me on a Sunday, Aspects of Love, Starlight Express, Whistle Down the Wind, Bombay Dreams and Billy, and on films such as The Italian Job, The Pink Panther Strikes Again, True Grit, Dances With Wolves and Out of Africa. 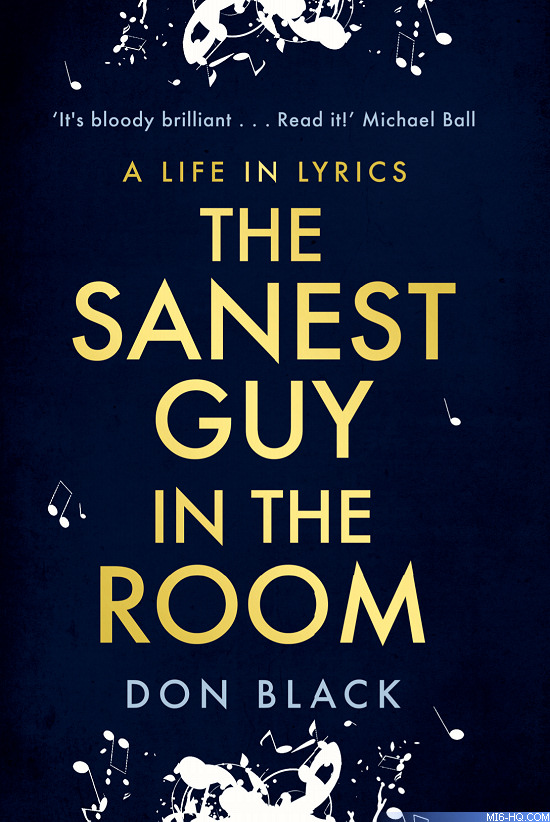 His memories of working on the Bond songs are of course one of the highlights of the book. Black talks with affection about his favourite collaborator, John Barry, with whom he wrote over 100 songs, “I was his only true friend. He was a loner and an introvert.” Black is often asked what makes the perfect Bond song, “I always believe it should be provocative, seductive and have the whiff of the boudoir about it. There should also be the lure of the forbidden, a kind of theatrical vulgarity as you are drawn into Bond’s mysterious world.” Black jokes that either Tom Jones or Shirley Bassey should have sung them all because, “they don’t sing songs, they bite lumps out of them.”

Black recalls the battles he and Barry had with Harry Saltzman over the lyrics to “Diamonds Are Forever,” which the producer considered filthy. He describes his approach to “The Man With The Golden Gun” was to write a delicious piece of nonsense – a piece of cartoon hokum. Black reflects that “The World Is Not Enough” was one of the trickiest songs to write until a letter from HRH, The Queen awarding him an OBE gave Black the inspiration he was searching for. “I said, ‘Well it’s not a knighthood but it’s a good place to start.’ Then I thought that’s my second line!”

The Oscar, Golden Globe, Tony, and Ivor Novello award winner began his career as a stand-up comedian and he uses that talent to great effect in this memoir. Black takes us through some of his most famous hits and tells us an anecdote or two before leaving us with a perfect punch line.

He reveals the essence of his craft and his own personal milestones while revealing those who have inspired him. It is also a poignant love letter to Don’s late wife, Shirley; the person with whom he shared his life for over sixty years. At its heart, the book is an exploration of the steadfastness of love and ever-changing nature of grief; and how both not only shape our present but continue to rewrite our past.

Told with wit, warmth, and good humour, The Sanest Guy In The Room takes a lean unconventional approach, delivering a hilarious, rich, and delightful paean to a life lived through song. But like his greatest songs, Black cleverly leaves you wanting more.