Now that No Time To Die has entered post-production, we begin the long haul to the time when we can finally see James Bond back on the silver screen. In the absence of new location photos and news to pore over, now may be a good time to catch up on some past James Bond history. Always remember that the past is prologue for the James Bond series.

Perfectly timed to help us through this nebulous waiting period is the newly released book The Many Lives of James Bond by Mark Edlitz, published by Lyons Press. Edlitz has previously written for both the television and printed media. This is his first foray into James Bond fandom and he acquits himself quite nicely.

Edlitz has collected a wide-ranging series of interviews with many different creatives behind the James Bond mythos. He has fresh and insightful interviews with Bond film directors such as Martin Campbell, Roger Spottiswoode, and John Glen.

The director section proves one of the most compelling sections in the book as each director discusses the history of Bond films and their particular film or films in the series. Even better though is the director's opinion on the films that came after their contributions. For instance, John Glen contrasts his film Licence To Kill with the similarly themed Daniel Craig film Quantum of Solace.

Glen also comments on directing James Brolin’s screen tests for James Bond in 1982. This leads to the topic of whether a Yank can ever really play Bond. For the record, Glen thinks that Mad Men star Jon Hamm would make a fantastic James Bond.

The book also has chewy morsels in a trio of interviews with Bond screenwriters from differing eras of the Bond series. Bruce Feirstein, Tom Mankiewicz and Dick Clement/Ian La Frenais all provide great insight into their respective scripts.

Mankiewicz details a super smutty line he wrote for Roger Moore in The Spy Who Loved Me. (Mankiewicz worked on various Spy scripts along the way even though his name is not on the film). Pity that it did not get used because it's a Bondian classic. (You need to read it in the book, I’m not going to give it away here)

Edlitz moves onto other spheres of the James Bond universe. Continuation novelist Anthony Horowitz has a highly interesting interview regarding his two original James Bond novels Trigger Mortis and Forever and a Day. 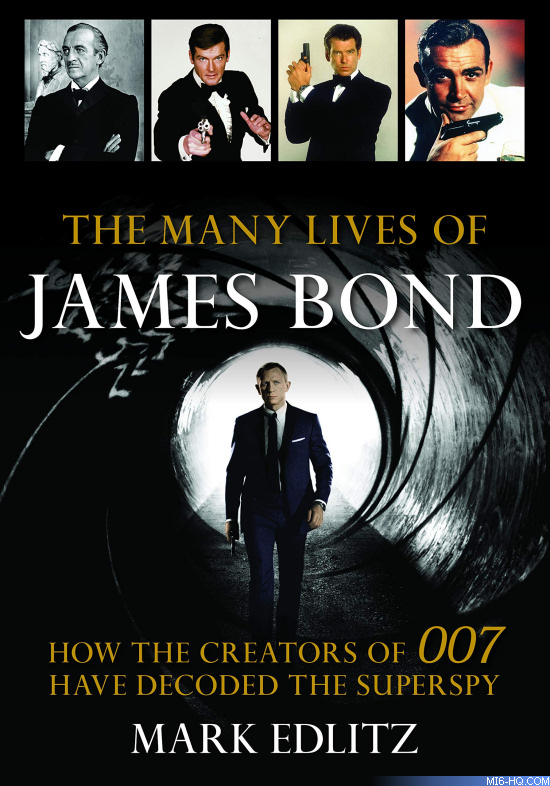 The graphic representation of the 007 character is explored with an interview with Graham McLusky. Graham McLusky relates stories about his father John McLusky, the brilliant illustrator of the original Daily Express comic strip version of the Ian Fleming novels.

Other interviews touch on James Bond graphic representations with poster artists such as Robert McGinnis who created the poster for Diamonds Are Forever and Live and Let Die amongst others. Also interviewed is Dan Goozee who created the key art for Moonraker, Octopussy and A View To A Kill.

Edlitz definitely breaks new ground with an interview with Joseph Malone. Malone was the dancer who portrayed James Bond in the gloriously cheesy but highly watchable For Your Eyes Only performance at the 1982 Academy Awards Ceremony.

Malone was a last-minute replacement for another dancer who was injured in rehearsal. Stepping in, Malone had to perform as James Bond in an elaborately choreographed sequence with special effects such as lasers and a Bondian car driven onto the stage. He also had to interact with Sheena Easton as she sang the Oscar-nominated theme song.

Malone wore a Bob Mackie designed costume. We have heard a lot about Bob Mackie this year as he did some of Elton John’s famously over the top costumes.

Along the way, Malone had to best a bevy of past Bond villains such as Blofeld and Dr. No. Even better were the appearances of the real Oddjob and Jaws in the form of Harold Sakata and Richard Kiel. (Youtube this clip if you are having a hard time visualizing all this).

Suffice it to say, the interview is highly entertaining whilst shedding light on a very under-explored area of the James Bond canon. Another revelation I found interesting was a Cubby Broccoli visit to a session of the James Bond Jr. cartoon series actor’s read through.

Edlitz wraps up the book with an interview with Lisa Funnell. Funnell is an Associate Professor who specializes in Women’s and Gender Studies. She has previously written about women and gender roles in the James Bond novels and films. Funnell’s interview ends the book with some academic heft.

The Many Lives of James Bond is quirky and off-kilter but remains entertaining and interesting for casual and hardcore James Bond fans alike. Highly recommended.