In Ian Fleming's novels and short stories, James Bond was fortunate enough to travel all over the World.  After all, it was, and still is, a part of his job to protect the British interests overseas. Of course, this was also a great excuse for Fleming to combine the exoticism of international travel with high adventure, and, for the readers, this was a way to experience vicariously through their hero the thrills of far-flung cities that they might not have been able to enjoy themselves. 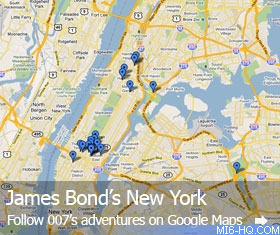 Left: Click on the map to launch MI6's interactive guide to 007's new York in Google Maps. Additionally, click any bold/blue link to jump to that locale on the map.

I remember as a boy reading the Bond novels and imagining these wonderful locales, wondering if I would ever get the chance to walk in his shoes. Well, thanks to affordable air travel, you no longer need to be overly wealthy or a member of the British Secret Service to do so. I have been fortunate enough to find myself in one or two of the cities where Bond's adventures take place.

Bond has visited New York a number of times in the films, novels and short stories. It is a wonderfully vibrant city, full of energy and life. However, like the rest of the World, it has certainly changed since Fleming wrote about it.

Getting There
Let's start off with Idlewild. Now named John F. Kennedy Airport (JFK as its known to locals), Idlewild is the first port of call for James Bond into New York, so I'd suggest getting a flight that takes you into JFK rather than Newark. That way you'll be able to visit a Bond location as soon as you arrive. Idlewild was not generally thought of that highly by Bond, and he certainly isn't looking forward to going through customs when he arrives in "Diamonds Are Forever". However, the American Government intervenes and makes sure he receives VIP treatment and is whisked through without the formalities. Sadly this is not the case in "Goldfinger", where he is virtually smuggled into the States against his will, nor is it true of "007 In New York", where Bond is angered by its inefficiency. So, even if you find customs a drag, you'll be sharing the same feelings as Bond, which might lift your spirits somewhat. 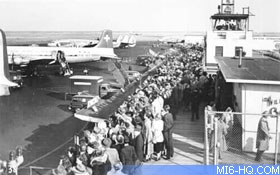 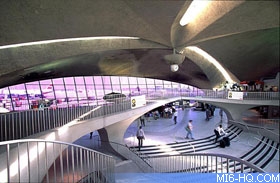 From Idlewild you can get a taxi into Manhattan. Interestingly, Bond always uses The Carey Cadillac (the same car company Marilyn Monroe frequently used) whenever he comes to New York. Carey no longer operates, however you can book a town car to the city for a little more than the cab fare. These town cars are usually Cadillacs, and for the real Bond experience and lack of stress, I highly recommend booking one. 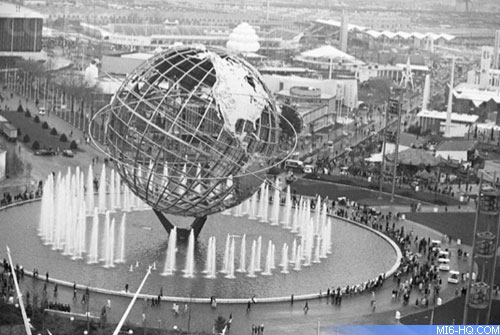 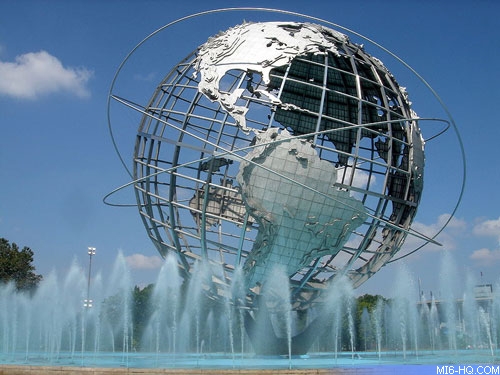 Above: Flushing Meadows, site of the '64-'65 World Fair. The famous Unisphere is still standing today.

Specify your journey to your driver here because there are much faster ways into Manhattan nowadays. Fleming, it seems, had Bond go via the Van Wyck Expressway (I-678) and then via Grand Central Parkway. This might be a slightly more time-consuming route, but it is the way Bond went into town. On the drive, be sure to look out for the site of the 1964-65 World's Fair at Flushing Meadows. Bond didn't visit here in any of Fleming's books or short stories; however, he does see the site under construction during his drive into Manhattan. 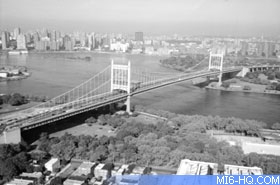 Above: the Triborough Bridge in Fleming's era.

"...that supremely beautiful bridge into the serried battlements of Manhattan."

Where To Stay
So, now you have arrived, where do you stay? Bond has stayed in a couple of hotels in New York that we know of. In "Diamonds Are Forever" and 007 in New York, he stays at The Astor, and Tiffany Case is also staying there in "Diamonds Are Forever". The Astor was located in the heart of Times Square, opposite the Bow Tie Building. Interestingly, the sign on the Bow Tie Building at this time would have read "BOND" in huge neon letters. Sadly, the Astor no longer exists. However, if you wish to visit the location, it once stood in Times Square, on the corner of 7th Ave and West 44th Street, opposite where the Toys 'R Us now stands. You could try booking a hotel in Times Square to try to evoke the same ambiance, however, I would suggest that you forget this and stay at the St. Regis. 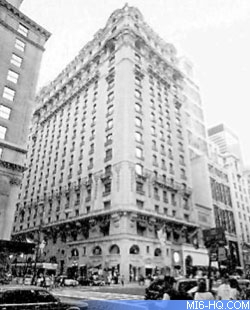 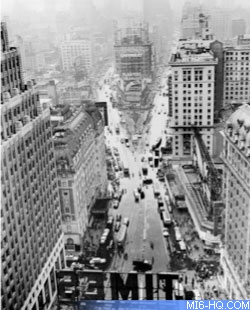 Above: (left) The St. Regis hotel on 5th avenue and (right) The Astor in Times Square.

The St. Regis is not inexpensive, but since when has Bond taken the budget option? The St. Regis is on 5th Ave and East 55th Street and is where Bond stays in "Live and Let Die", high up on the 21st floor. Bond is Americanised (or should that be Americanized) here by Felix and the men from the FBI. It is also here that Mr. Big warns Bond off the case by sending him an exploding alarm clock.  Bond calls down for room service with the following:

"Room Service? I'd like to order breakfast. Half a pint of orange juice, three eggs, lightly scrambled, with bacon, a double portion of cafe Espresso with cream. Toast. Marmalade. Got it?" 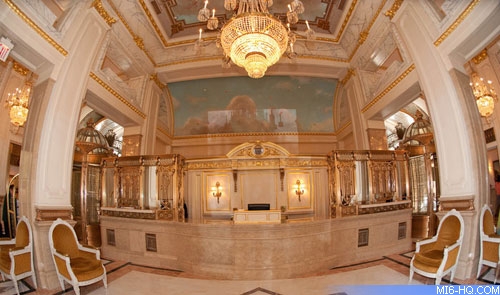 Above: The elaborate lobby of the St. Regis, New York.

Fleming describes the St. Regis as "the best hotel in New York." What more do you want?

Stay tuned to MI6 for part two of 007's guide to New York in which we investigate dining and shopping locales.