On 12th September 1982, the Bond circus rolled into Udaipur, India to start work on the many India based sequences in Octopussy. When Bond first arrives in the country, he is alerted to Vijay's disguise as a snake charmer when the latter plays the James Bond theme on his pipes. 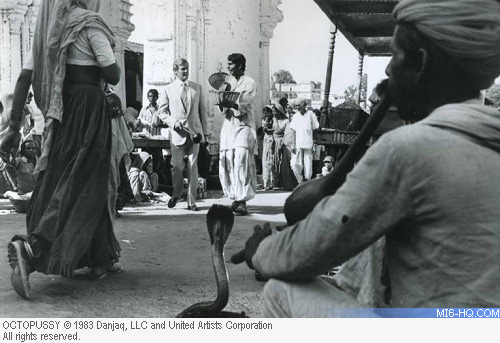 A British documentary crew following the steps of Roger Moore and Vijay Amritraj on location in India for 'Octopussy' in 1982 failed to dodge the piles of camel poo on the streets whilst walking backwards, much to the leading man's amusement.


On location in India with Roger Moore and Vijay Amritraj.