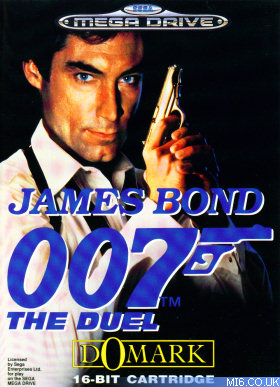 Mission
James Bond 007 - A name to strike fear in anyone foolish enough to cross him. Now he's back, in a brand new adventure especially for Sega. Four frantic levels of fast and furious action await you! What are you waiting for?

Official Blurb
Bond is back. In his biggest challenge yet he must face all of his old adversaries, in a race to save the world.

Mad Professor Gravemar has attacked a top secret international satellite launch centre on a remote island in the Caribbean. Having taken control of the scientists he has set to work building satellites which he plans to launch into space on a shuttle, in order to take over the world. To foil Bond's attempt to stop him, the desperately mad Gravemar has built a cloning machine which he's used to reproduce all of Bond's old enemies.

Hostages are being held on the island as a human shield, and the Professor has numerous guards with instructions to shoot to kill. Never before has Bond had to face such deadly opposition. 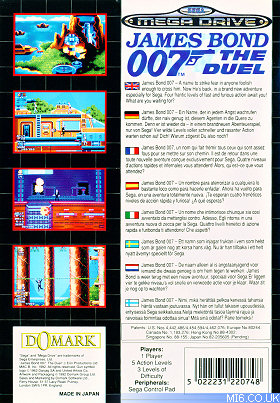 Above: Reverse box art for the Sega Megadrive / Genesis version.

In this mission Bond must rescue the hostages and destroy the mad Professor's establishment, including the space shuttle launch centre, be locating and planting bombs in strategic positions. Q has managed to plant special weapons (Q Cases) in various locations on the island, but Bond will need all his skills to succeed this time...

History
"James Bond 007: The Duel" was released on 14th August 1993 by a company named Domark - named after it's founders whose names were Dominic and Mark. The company no longer exists after it was bought out along with United States Gold & Core design and became part of the Eidos video game company which still exists today. 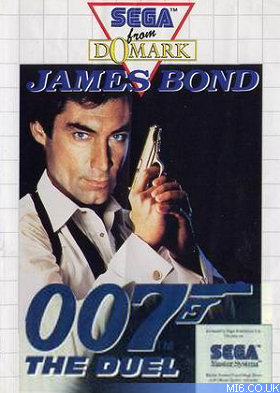 The game is split into five levels (despite the back of the box claiming only four!): island docks, jungle, volcano, space shuttle, and escape. "The Duel" echoes the format of Domark's previous game, the spin-off "James Bond Jnr" platform romp released in 1992, with more of the same jumping, ducking and shooting action.

Although this time with "The Duel", it's the real 007 in a stylish tuxedo. This genre of platform shoot-em-up would soon become a tired format due to movie tie-in games of the era often cashing in on the lazy development choice.

The concept of using past villains from Bond films, resurrected thanks to the villains cloning device, would be echoed in the 2004 title "GoldenEye: Rogue Agent" by EA Games - which also brought back past favourites with a healthy dose of creative licence. As with it's modern cousin, "The Duel" fails to capitalise on the idea and the likes of Jaws and Oddjob fail to make a real impact.

It is the repetition of the objectives that spoil "The Duel". Each level is comprised of rescuing the Bond Girl hostages, finding the bomb, arming the bomb, placing the bomb and escaping the level. This is fine for the first level, but by the fourth and penultimate mission it becomes tiresome.

The game is solid though, with few noticeable glitches and no bugs that spoil gameplay - a far cry from Domark's first 007 outing "A View To A Kill".

Graphically, "The Duel" makes good use of the Megadrive / Genesis palette and char maps, with nice bright and bold scenery. This game is in no terms meant to be realistic, and shades of "James Bond Jnr" cartoon seep through with the comic strip style adopted by the artists. Needless to say, the game is far more impressive on the 16-bit Megadrive / Genesis platform compared to it's 8-bit Master System predecessor.

Gameplay is relatively straight forward, and due to the repetitive objectives, not that inspiring either. Many enemies can be dispatched simply by running, ducking and shooting. This is a far cry from the excellent "Licence To Kill" produced by the same team only four years earlier.

As usual for a Domark game, Matt Furniss makes listening to the game a pleasurable experience, especially considering the limitations of the technology, with faithful renditions of familiar cues.

On the whole, the game works quite well within the limitations of the platform shoot-em-up genre the developers ring fenced their creativity within. The game is quite polished, although lack of depth and replay value detract from the positives including the bold graphics and slick presentation.

Viewed within the era that "James Bond 007: The Duel" was released, Domark ended their run of 007 games on a slightly flat note, although it is difficult to apportion much blame for the platform genre on the developers, as it was the de facto style for movie tie-in games of that era.

Level 1
The action beings as Bond jetpacks onto the supply ship unloading at the islands docks. You have to find and rescue the hostages, eliminate the Professor's guards, locate and set the bomb to destroy the ship's flight deck and face an old enemy, Jaws, in order to escape. But be careful, there's only a limited amount of time until the bomb explodes, and if you're still on the level, you will die.

Level 2
Having neutralized the Professor's supply ship you must make your way through the jungle where the satellite receiving station is hidden. The evil voodoo doctor, Bones, will thwart your attempts to storm the station. You must, of course, free the hostages before you can set the bomb and then find the entrance to level 3, the underground power plant.

Level 3
Inside the volcano the mad Professor Gravemar has engineered a volcanic heat exchange reactor. You must negotiate the corridors, avoiding the molten lava, scale the outside of the reactor, and reach the top to set the bomb and make your way to level 4, the shuttle launch pad, beware of Yoyo on your way. 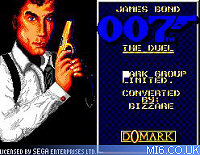 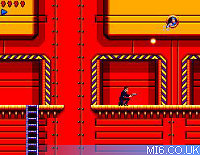 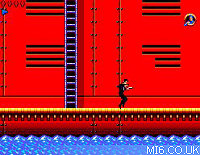 Above: Screenshots for the 8-bit Sega Master System version.

Level 4
Your objective is to destroy the space shuttle, in this most difficult level. Odd Job and the guards are not your only obstacles as you must negotiate the searing heat from the shuttle's engines. Once the hostages are rescued and the shuttle is destroyed, Bond's mission is complete... almost... now you must escape from the island.

Level 5
Jaws, you arch enemy is back and makes a last desperate attempt to kill you. Only if you manage to defeat Jaws this time will you be able to escape to safety.
Good luck James!

Controls
D-Button: Press LEFT or RIGHT to face Bond in different directions. Press DOWN or UP to kneel or stand up. Standby doorway and press UP to hide in doorway.
Button A: Press to jump - press A plus the directional button (D-Button) to jump in another direction.
Button B: Press to shoot - hold down for automatic shooting. Press B plus the directional button to shoot in another direction.
Button C: Press to throw grenade (if you have one).
Start Button: Press to start the game. Press to pause the game.

Cheats
Sega Master System - On Controller 2, hold in Up/Left, Button 1 and Button 2, and then Press Button 1 on Controller 1 to open the cheat menu.

You will see the bomb, but you cannot disarm it yet. To disarm it, you need to find the last Bond girl who was mentioned just a few sentences ago in this walkthrough. Although, if you did rescue the Bond girl, then disarm the bomb, you would have a minute to kill Jaws (Which takes about 30 seconds) and the last 30 seconds to get to your exit. (This takes about 40 seconds). Move across the platform, jump onto another platform, and kill the guard. Wait until a platform that moves up and down to appear, and then jump on it. When you get to the bottom, jump off. Now, you are almost ready to face Jaws. Kill the two guards that are patrolling the area at the top of the stairs and you will encounter Jaws. From your position on the stairwell, shoot him as he comes to you, and continue to do this until he is dead. Jaws will only patrol the top of the staircase and not move downward. Jaws was kind of disappointing wasn't he? Just a simple choking attack move...no infamous bite to the neck. Now, move back to where you found the last Bond girl. Rescue the last Bond girl, go to the bomb, and arm it by simply walking over it. Go back to where you fought Jaws. Move across the platform where Jaws used to be and get on the platform that moves up and down. When you get to the bottom, kill the guard, and go into the submarine.

When you get to the end of the vine, continue to the right side of the screen and use the overhead log to cross the pit. Continue to the right of the screen and you will see a building-like place. However, continue right and drop down into the pit that you will see shortly. To the left of this bunker is a Bond girl. Rescue her. Now, go to the building-like structure. Climb to the top and you will face a tank-like vehicle. From a safe position, fire upon the tank with your pistol and grenades and eventually it will retreat. However, it will come back a few times before finally retreating so be careful. When you get to the end of the platform, you will see a machine with green bubbles come out of it. Jump onto the green bubbles and you will be sent 10,000 feet into the air. Hopefully, you will land on one of the branches. If not, try again. Once you are on the top branch, descend a bit and move slightly to the right. Hopefully, you will see the Bond girl with a patrolling guard. Kill the guard and rescue her. Jump onto the machine to the right of the Bond girl and descend down. (Kneel and press the jump button). Once you've finally descended to the bottom move to the left (If you're not near the hill, move to the right), kill the guard, and rescue the girl. Now, move to the right of the screen and climb the hill. Eventually, you will come to a pit. Wait for the moving platform and move down. Do not bother climbing the hill, it leads nowhere. When you get to the bottom, go to the left to arm the bomb. You only have fifteen seconds so move fast. Quickly move to the right of the screen killing guards as you go. Once you kill about three guards and continue moving, you will beat the level.

Keep taking the straightforward path collecting Bond girls as you go until you get to the multiple rockets. Find a path that goes to the left and eventually leads to two Bond girls and the bomb for the level. After getting the Bond girls, arming the bomb, go up the ladder, and prepare to fight the boss. This boss is actually quite challenging compared to Jaws or Odd job. Throw a few grenades on it and fire a few bullets on it and it'll eventually blow up. Continue running to the exit, and you'll beat the level.

This level is very quick. Here you are fighting Jaws in a machine similar to the one in Level 4. Get up on the ladder and get to the top of the room. Shoot Jaws' crane that attempts to hit you every now and then and throw a few grenades at it. When you have destroyed it with enough pistol bullets and grenades go down and meet the Bond girl.