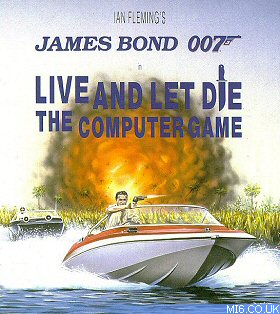 Mission
Dr. Kananga or "Mr. Big" as he is known in the underworld, is a shrewd operator who conceals his dealings from prying eyes. His headquarters, which are well hidden beneath a cemetery on San Monique, ships all of the un-refined heroin to processing factories in remote and inaccessible locations. James Bond, 007, the world's top secret agent must undertake a series of dangerous missions to overcome the covert operations of Dr. Kananga. As James Bond you must carry out the orders of "M", traveling by the only accessible means.

Official Blurb
M has given you the top secret mission: "Find Mr. Big, and don't come back until you do". 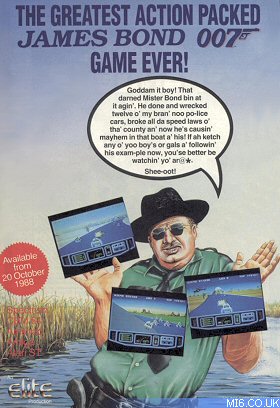 Q has given you the latest gadget: "Be very careful with it 007. It is the fastest and most dangerous speedboat ever made. Just to make sure you find Mr. Big, we have arranged some practice sessions for you in extreme conditions. You'll go from the Desert to the Icebergs before we let you loose in Florida - Mr. Big's home country. Good luck 007" 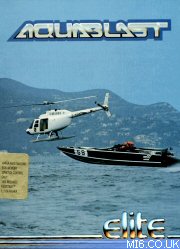 History
"Live And Let Die" was released on October 20th, 1988 by a company named Domark - named after it's founders whose names were Dominic and Mark. The company no longer exists after it was bought out along with United States Gold & Core design and became part of the Eidos video game company which still exists today.

The game was swiftly branded with the usual 007 trappings and titled "Live And Let Die" as publishers Domark spotted the obvious connection with the film's speedboat chase. Elite also released the game "Aquablast" (the original title) to the market without any Bond branding. Developers Keypunch created the 16-bit versions of the game for Domark. 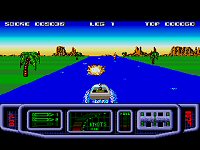 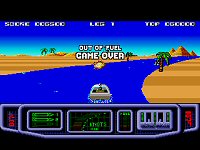 The game was a re-branding of a title already in development ("Aquablast"), based on the idea that the speedboat sequences in the game were similar to the 15 minute Louisiana bayous boat chase in the 1973 film. The storyline of the movie was almost thrown out completely, bar the title villain. Gone are the chasing boats, J.W. Pepper and his cousin Billy Bob. In are icebergs, helicopters and gun emplacements.

The game consists of three training missions (practice course, north pole training exercise, Sahara desert training exercise) and then one "real" mission against Kananga in New Orleans - basically the four types of terrain you can have alongside a river. Level design is flawed by the restrictive genre, leaving you feeling that you've encountered the same stretch of river a dozen times before you reach the end of each mission. 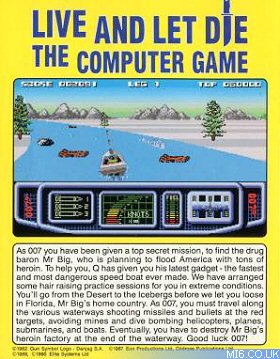 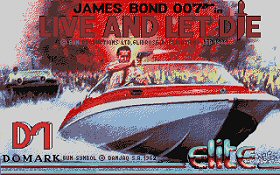 There is little diversity in the game play as "Live And Let Die" is nothing more than a speedboat racing game. Despite striking location changes, gameplay remains effective the same, with only the graphics changing the look of the same obstacles and targets.

Graphical quality varies wildly across the platforms, and as you would expect, the 16-bit Amiga and Atari ST versions are far superior over their 8-bit counterparts. Of the older systems, the C64 narrowly edges it over the Amstrad CPC. Mark Cooksey is credited with the music for all platforms, although the Spectrum version deviates from the usual James Bond theme remix with a track that does not even reference the movie's title song. Sound effects are weak on all the platforms, but especially the Spectrum version, which has a grand total of two.

"Live And Let Die" is a classic example of the weak movie tie-in games that were released around the late 80's / early 90's. Fortunately, better - original - titles lay ahead for Domark, and "Live And Let Die" can only be looked back upon as quick fix stop-gap between their more robust outings. Although rated by many as Domark's best 007 title at the time of release, fortunately Bond fans had much better things to come.

Goddam it boy! That darned Mister Bond bin at it agin'. He done and wrecked twelve o' my bran' noo po-lice cars, broke all da speed laws o' tha' country an' now he's causin' mayhem in that boat a' his! If ah ketch any o' yoo boy's or gals a' followin' his exam-ple now, you'se better be watchin' yo' [email protected]*

Trivia
Elite Systems International Ltd who developed "Live And Let Die" were also the team behind "Buggy Boy". Many at the time considered "Aquablast" (the non-Bond version) to be an unofficial sequel to the C64 classic.

Introduction
Dr. Kananga, the infamous and ruthless Prime Minister of the Caribbean island of San Monique, an island whose people are controlled by the fearful power of voodoo, is harvesting huge fields of poppies concealed under camouflaged netting on this paradise island.

He plans to control the US drug market by flooding America with tons of free Heroin which would create a living hell for millions, and incidentally, provide money for arms to Eastern bloc allied San Monique. 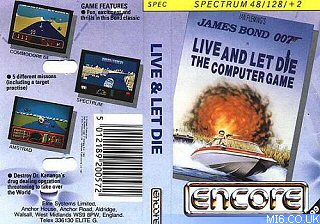 Dr. Kananga or "Mr Big" as he is known in the underworld, is a shrewd operator who conceals his dealings from prying eyes. His headquarters, which are well hidden beneath a cemetery on San Monique, ships all of the un-refined heroin to processing factories in remote and inaccessible locations.

James Bond, 007, the world's top secret agent must undertake a series of dangerous missions to overcome the covert operations of Dr. Kananga. As James Bond you must carry out the orders of "M", traveling by the only accessible means. 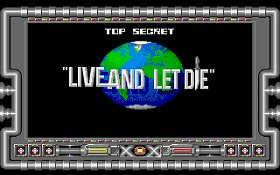 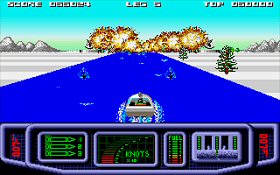 In the target practice section the red targets must be shot with the forward mounted machine gun, the black targets must be shot using missiles. There are two exercises that enable Bond to learn about the type of defence system used by Kananga, and finally the mission which is bristling with Dr. Kananga's defences. You must avoid mines, gun emplacements, dive bombing, enemy helicopters, submarines, enemy planes and enemy boats, some of which drop mines or booby trapped fuel barrels and can only be destroyed with a missile.

Along the way you must completely pick up fuel by driving over fuel barrels, as well as the canisters containing food and missiles dropped by the C.I.A. helicopters.

Your speedboat must travel through dark tunnels, slide up slopes to avoid obstacles and must destroy closed lock gates with 'snuff' missiles.

With a lot of skill and some luck you will reach the Heroin processing factories at the end of the waterway. The factory can only be destroy by leaping off a log into the air and letting off a 'snuff' missile to finally destroy the evil installations. 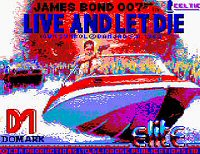 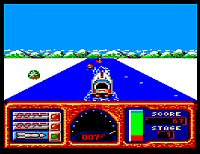 Unlike other games, this title does not work on a common "lives" system. Instead, it relies on a fuel gauge. There are fuel pickups scattered about each level except the practice course. When you run out of fuel a reserve tank kicks in that lasts for about seven to ten seconds. When you run out of fuel, your boat slowly slows down and the mission ends unless you can collect a fuel pickup while you are slowing down.

Practice Course
Objective: Duty Assignment 007... Improve your steering and firing skills by using your cannon to shoot the red targets and missiles to destroy the black targets. Can you get that 100% rating?
Allies: N/A
Enemies: N/A
Obstacles: Black and Red Targets

Tips: Don't forget to collect fuel. To collect fuel simply run into the boxes that float in the water. These boxes can sometimes be red, brown, green, and blue. However, do not collect the yellow fuel pickups. They were dropped by enemy boats and they will kill you if you attempt to collect them. The defensive guns, enemy boats, and mines can be destroyed with one shot from your cannon. To destroy the tunnel gates you must fire a missile at them. Your boat carries three missiles. However, if you run out of missiles don't worry because some pickups contain missiles.You may find the defensive cannon fire hard to avoid. When a defensive cannon fires its three-round burst and you are going at full speed, immediately turn to the direction where the shot is going and the shot will splash into the water. The enemy plane that fires torpedoes and missiles at you cannot be destroyed. The torpedoes are slightly difficult to avoid - try zig zagging to attempt to avoid them. To avoid the two enemy missiles that launch simultaneously simply drive through the middle of the path they make.

Tips: When you get to around 67,000 points you will see Mr. Big's heroin factory. To destroy it, make a head-on collision with a log (those brown sticks in the water), and while in the air, fire a missile. To fire a missile, go at a fast speed (100 MPH), pull back on your joystick, and press the fire button to fire your missile(s) to destroy the factory and you will complete the mission. For tips on how to avoid the enemy fire look at the North Pole Training Exercise mission. When Mr. Big's factory is in your sight watch out for the torpedoes because many are launched when you first get there. When you destroy Mr. Big's factory you will have completed "Live And Let Die".