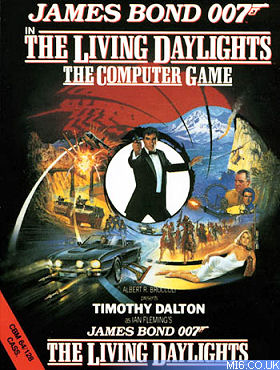 Mission
As James Bond you must shoot your way through all eight levels before you at last come face to face with the evil arms dealer - Brad Whittaker. General Koskov, the Russian KGB double dealing agent helps Bond through his adventure - watch him closely - he may be treacherous! Once Whittaker's forces are destroyed, your mission is accomplished and the beautiful Kara is yours!

Official Blurb
Brad Whittaker international arms dealer and megalomaniac. Necros - his ruthless sidekick. Koskov, double dealing KGB General and the beautiful Kara, the sophisticated Czech cellist who wins the hero's heart. Match them against James Bond, renowned British Secret Agent (for whom love and death is a way of life) and you have all the ingredients for a super spy story and a great gripping games!

This game is closely based on the all action film and coin-op Arcade game from Arcadia, but puts you into the action as you control James Bond through eight fast and furious levels. Moving from Gibraltar to Afghanistan, you encounter the SAS (friendly) and the KGB (not so friendly) enemy helicopters (very unfriendly!) and even a milkman with exploding bottles!
Now go ahead and join James Bond - living on the edge! 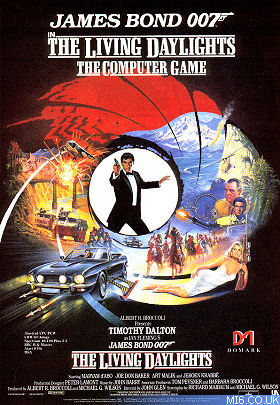 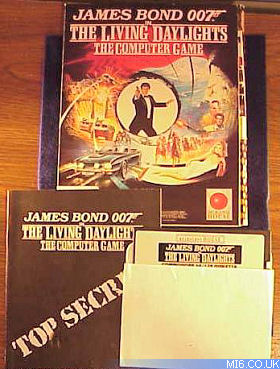 History
"The Living Daylights" was released in September 1997 by a company named Domark - named after it's founders whose names were Dominic and Mark. The company no longer exists after it was bought out along with United States Gold & Core design and became part of the Eidos video game company which still exists today.

Domark searched around for a year to sign developers to create the movie tie-in title. Three different developers (Sculptured Software Inc - C64, Walking Circle - Spectrum, and De Re Software - Atari) would all create slightly different versions of the same design by Richard Naylor.

Originally planned for a June 1987 release to coincide with movie premiere, "The Living Daylights" slipped a few months and was eventually released in September. An arcade cabinet version by developer Arcadia was also released in the summer of 1987.

Trivia
Upon completion of the game, the British Prime Minister thanks you for saving the world again. 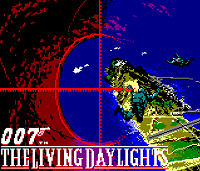 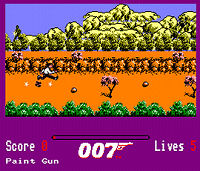 The last time Domark had release a game to coincide with a movie, "A View To A Kill" was a dismal effort that suffered bad reviews and was riddled with bugs. This time around, Domark chose quality developers who wouldn't make the same mistakes. In that sense, "Daylights" is a success as the game is robust and built with quality from the ground up.

The storyline of the movie is followed during the game mostly by the locations rather than character interaction. The game is a sideways scrolling third-person shooter, so variation between missions is limited. Consisting of eight levels, the gameplay is quite repetitive, but you do get to use different weapons and gadgets throughout the adventure which helps add a little variety to the affair. 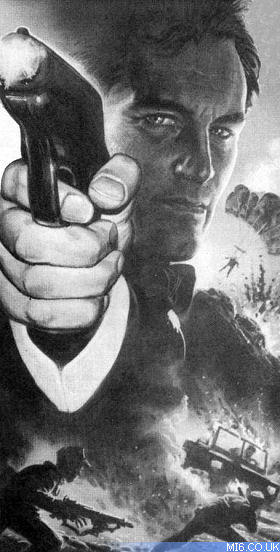 Above: Original artwork created for magazine features in 1987.

Gameplay is hampered by the controls. The movement and aiming is performed by moving a crosshair on screen where you wish Bond to go to, and where you want him to shoot. The fact that this mechanism wasn't taken up by other games using the popular sideways scrolling system suggests that it wasn't that successful.

Graphical quality varies across the platforms, although not as wildly as usual for Domark games. The characters are competently animated, but the main criticism of the graphics are the dull, repetitive and often blatantly looping backgrounds. The Atari 800 and C64 beat out the Spectrum and Amstrad for graphical quality.

8-bit legend David Whittaker (appropriately named for this game) provides the game music and once again hits all the right notes, choosing to create some original cues rather than translate the movie music directly. Spot effects are what you would expect for a game of this era, but with a few interesting creations such as the "game over" sound.

"The Living Daylights" is an improvement in Domark's lineage of movie tie-in games in the sense of robust and reliable gameplay, however it comes at the expense of interesting action and originality with the sideway scrolling format. With "Daylights", Domark went back-to-basics with simple linear gameplay to deliver a solid title, but it will leave you neither shaken nor stirred.

Introduction
As James Bond you must shoot your way through all eight levels before you at last come face to face with the evil arms dealer - Brad
Whittaker.

General Koskov, the Russian KGB double dealing agent helps Bond through his adventure - watch him closely - he may be treacherous! Once Whittaker's forces are destroyed, your mission is accomplished and the beautiful Kara is yours! 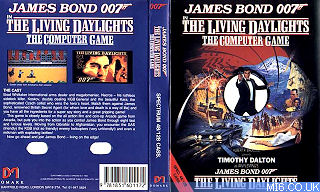 Level 1- Gibraltar
Bond begins his adventure with a test of the defences on the island of Gibraltar in the Mediterranean. He must match his wits against the skills of the SAS armed only with a paint pellet gun. After all, it is only a mock battle, or is it? Could one of the SAS men really be an enemy in disguise? Take care, he is out to kill!

Level 2 - The Lenin People's Music Conservatory
Can you get the Russian defector Koskov away from his KGB guards without injuring any of the music lovers enjoying the show inside. Koskov will follow you but it is up to you to defend him from the snipers who appear all over the building. Get him out of the area quickly.

Level 3 - The Pipeline
You must smuggle Koskov past the pipe workers and send him on his way down the Trans-Siberian Pipeline. Watch out for the Russian Guards and the added danger of falling pipes!

Level 4 - The Mansion House
You have managed to rescue Koskov but somebody wants him back! They have sent the ruthless killer Necros to snatch him back from the British Secret Service. Disguised as a milkman, he and his friends will try every dirty trick to get Koskov back. Watch out!

Level 5 - The Fairground
You have to meet your fellow agent but Necros has followed you and has orders to kill!

Level 6 - Tangiers
Your mission to find the missing Koskov takes you to the rooftops of Tangiers where you must battle for your life.

Level 7 - The Military Complex
Trapped in the Afghanistan desert in the middle of a Russian Air Base. No problem for 007! Watch out as the enemy release all their forces against you. Can you survive?

Level 8 - Whittaker’s House
You finally meet the Mastermind behind the dastardly plot - Brad Whittaker the American Arms dealer and military historian. He unleashes all the power of his arsenal against you but you must fight on to reach him.

Controls
Right, Left, Up, Down - control the cursor showing where Bond is aiming.
Fire - fires Bond weapon at cursor position.

If you press Right (or push Joystick Right) so that the cursor hits the right side of the screen then Bond will run in that direction until you release the button. To make Bond jump and duck under flying objects etc., hold the fire button down while pushing UP and DOWN respectively.

Status Panel
This is the area at the bottom of the screen and shows Bond strength, no. of lives left, current weapons and score.

Extra Weapons
Bond must fight through 8 levels to reach Brad Whittaker, the Mastermind behind all his troubles. Between each of these levels Q has kindly given Bond a chance to pick a weapon (or object) that may help him in his mission. Unfortunately only one of the objects you can choose will prove useful on the next level. You have only 5 seconds to decide. Use the joystick or direction keys to highlight the weapon you require and press fire to select. Remember only one will be of real use.

Selecting Weapons
To select the special weapon/object you have chosen, move the firing sight down to the bottom right of the screen. The status panel will show the current weapon and pressing fire will switch between the gun and the extra weapon. Moving up onto the playing area will continue the game, but now Bond can use the selected weapon.

Note: Some weapons can only be used once. If you choose an object that cannot be used as a weapon, selecting it, activates the object and leaves you with the Walther PPK, to continue shooting. Among the weapons/objects you can choose are:- Bazookas, grenades, night vision glasses, missile-firing pens and cigarettes, a hard hat, bombs, mortars, crossbows and a ghetto blaster!

Level 2
Choose the Infrared Sight. In case you haven't noticed yet, if you don't use the infrared sight the enemies and civilians will both be in black and you won't be able to distinguish between the two. Switch to your Infrared Sight by moving your crosshair over the words "Walther PPK" and press fire. Just shoot your way through the level and eventually you will get to the end.

Level 3
You won't need any weapons for this. Like you did on Level 2, run through the level and shoot whenever necessary. When you see a small yellow pipe pull down on your joystick to roll. If you don't, when the pipe explodes and lets out steam, it will damage your health. When you see a white pipe that in Bond's path, push up on the joystick to jump over the pipe. If you don't you will trip and be neutral for about three seconds.

Level 4
Choose the bazooka and look for the agent with his explosive milk-bottles. I would recommend switching to your bazooka now. Shoot the agent three times and he will disappear. After you run for about three seconds, he will appear again. Shoot him again. Every now and then, a helicopter will appear. Simply shoot the helicopter once with your Bazooka. I believe you need to kill the agent three or four times to complete the level. The helicopter will also drop some kind of bomb that makes a big hole in the street. Jump over the hole or you'll trip and fall like you did in Level 3.

Level 5
This level is quite hard because of the enemies' endless supply of explosive balloons. Switch to your crossbow, move your crosshair over the explosive balloons, and hit the fire button like a madman. Eventually, the agent will run out of balloons and now you have to kill him. Switch to your Walther PPK shoot him. Don't worry; it only takes about 50 shots to kill him.

Level 6
This level actually isn't too bad. You'll only need your trusty Walther PPK for this. This level is actually quite similar to Level 4 where you killed the agent with the explosive milk bottles. Instead of the enemy throwing explosive milk bottles, he'll throw really dangerous... sticks! Unlike Level 4, you won't need to shoot down a helicopter. There will be a few enemies in the background that you'll have to shoot occasionally, but the level shouldn't be that hard. Jump when you switch from building to building or you'll trip and fall.

Level 7
Choose the Bazooka for this. The dangerous people in green are back from Level 1! This level actually isn't that different from Level 6. You'll have to shoot someone at the end of each screen like you did in Level 4 and Level 6. Occasionally, there will be some soldiers in the background shooting at you, but they shouldn't be that difficult to beat. Kill the soldier at the end of the screen three or four times and you should complete the level. You will also have to jump over green ammo boxes or you'll trip and fall.

Level 8
In this level, you can't choose a weapon for yourself. Switch to your Bazooka and jump over the dangerous sticks Whittaker throws. Occasionally he'll throw a stick that comes from above so duck and roll to avoid it. Eventually you'll get to Whittaker himself. There isn't a strategy at all for beating him. Just press the fire button like a madman and hopefully you'll beat him.