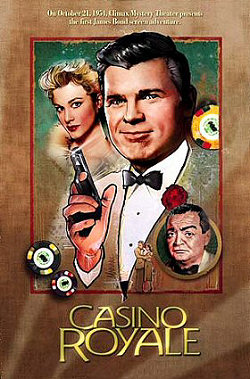 Mission
The very first screen appearance of James Bond 007, made in 1954 for US TV channel CBS. Bond's task is to destroy the evil Le Chiffre, and his plan is to force him to lose a large sum of money at the gambling tables of Casino Royale. 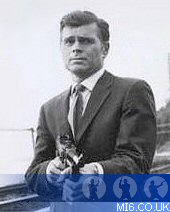 Above: Barry Nelson as James Bond 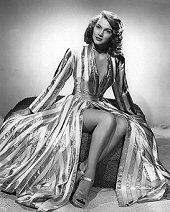 Above: Linda Christian as Valerie Mathis 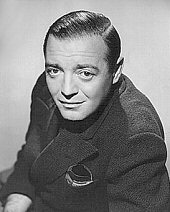 Above: Peter Lorre as Le Chiffre

History
Contrary to popular belief, the honour of being the first actor to play James Bond fell not on Sean Connery, but on American Barry Nelson, who starred in this live 1 hour production of Ian Fleming's Casino Royale. The performance on 21st October 1954 (8.30pm EST) was the first in CBS's 'Climax' series of dramas.

CBS brought the rights for Fleming's first book for $1000. Since then the rights have gone via Charles Feldman's spoof of 1967 to Eon Productions, who picked them up in early 2000. The film, which is black and white, was actually lost until 1981, and even then all of the various VHS incarnations (except the Special Edition from Spy Guise Video) lack the climax of the film, stopping with Le Chiffre apparently dying, but having just got the razorblade from his hat.

Plot
The film is quite loyal to Fleming's version, with a few changes of nationality and sides. It starts with Bond being shot at but ducking behind a pillar outside the casino. Leiter (who is English and whose first name is Clarence) approaches 'Card Sense Jimmy Bond' as he is nicknamed, and is met by the first Bond one-liner (see "Best Line"). 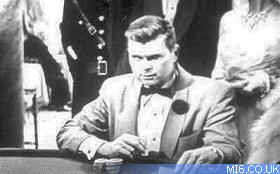 Over supper Bond explains Baccarat to Leiter and the audience, and Leiter explains the CIA's Bond (not 007) his mission: Le Chiffre, the Soviet spymaster in France, is in financial difficulty, but intends to save his life and Communist funds by winning it back at the casino. Bond's job is to clean him out. 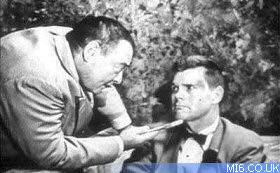 Matters are complicated when Bond's former lover, Valerie Mathis turns out to be a communist agent with Le Chiffre. They meet in Bond's room, and knowing about Le Chiffre's bug they turn up the music and kiss, before acting their parts for the villain.

The next night at the casino the game takes place. Bond is told if he wins, Valerie will die. Bond is beaten by Le Chiffre, but then gets an extra donation, with which he cleans out the 'toad'-like villain. Valerie disappears, and Bond returns to his room after dealing with a henchmen using a gun disguised as a cane. He hides the cheque just before Valerie comes (she is in fact a French agent, who supplied the extra donation), but Le Chiffre and his men capture them. Bond is tied to a bath and tortured by having his toenails removed with pliers (rather than Fleming's version using a seatless cane chair and carpet beater).

Valerie gives away the location of the cheque, but helps Bond reach the razorblade in Le Chiffre's cigarette case, which he had left on the bath. Bond escapes, and overcomes a henchmen. Le Chiffre enters the bathroom with a gun, and he and Bond shoot each other. Le Chiffre is more seriously hurt, but reaches another razorblade, hidden in his hat. Bond says 'call the police' just as Le Chiffre lunges. Bond fans with bad videos will now be infuriated as they miss the climax. Bond dodges the razor blade and finally overcomes Le Chiffre. 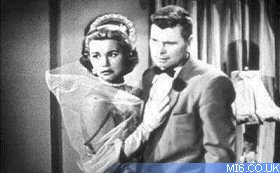 Above: The final scene which is missing in all VHS releases except the 1997 Special Edition by Spy Guise Video.

Review
Peter Lorre is superb as the villain Le Chiffre. His toad-like looks and menacing acting make him a great villain. Michael Pate is annoying but acceptable as Englishman Leiter, and Linda Christian is competent enough as Valerie Mathis, although her looks are taken away from by the black and white.

But what about the first James Bond? Barry Nelson is just about okay. He is handsome and about the right age, and unlike Roger Moore he has at least read the books, although his Americanisation of Bond takes away slightly from Fleming's cold character. Nelson was born in San Francisco, California on 16th April 1920, and was a regular actor in mid-sized roles on Broadway in the '40s. Since Casino Royale he has appeared in "Airport" (1970) and "The Shining" (1980). So how did he do? Certainly he is credible as Bond, although he lacks flair. He delivers the one-liners sharply, and his interpretation of the role is not too bad, although being an American he will always look out of place. Nelson's Bond is hard and cold, as 007 should be. He struggles at the fight scenes (hardly surprising considering the production was filmed live) but he does a reasonable job, with a similar quality of acting to Lazenby.

The picture itself, directed by William H Brown Jr. and written by Antony Ellis and Charles Bennet, with music by Jerry Goldsmith is reasonably filmed, and remains tense throughout (an effect slightly spoiled by the needless use of Act intros). Obviously the usual special effects are lacking, but overall this is a credible performance of Fleming's book, with good production values and passable performances.

Availability
Spy Guise Video now made this amazing and historic program available back in 1997 - complete with the restored ending missing from previous video versions. The added ending restores the final confrontation between Bond and Le Chiffre in which Bond comes out victorious. There is a traditional Bond ending "with a kiss" and then the credits appear.

This deluxe collector's edition also featured many extras: an exclusive overview of the life of Ian Fleming and the "Casino Royale" legacy hosted by Lee Pfeiffer, co-author of the best-selling book "The Essential Bond: An Authorized Celebration of 007".