Back in April, EON Productions announced that work on the 23rd James Bond film ('Bond 23') was indefinitely suspended due to the financial uncertainty surrounding the beleaguered studio MGM.

"Both Barbara [Broccoli] and I are convinced that we'll be bringing you another Bond film soon", he told the audience. 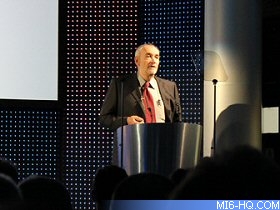 Recent tabloid reports the the film had been 'canned' were shot down by the trades. It is understood that both Daniel Craig and would-be director Sam Mendes are in a holding pattern, ready, willing and eager to get started when the green light comes.

MGM secured a further debt payment extension this week, valid through September, whilst they seek a buyer or rescue package.

Thanks to `danslittlefinger` for the alert.