The new hypercar from Aston Martin is confirmed for Bond 25

Aston Martin's new £1.5million hypercar, of which only 500 will ever be built, has been confirmed to appear in Bond 25.

In continuing the fine tradition of Aston Martin ‘V’ cars, Valhalla can trace its lineage back to 1951, when the Vantage designation was given to high-performance variants of the then current model, the DB2. Though actual Vantage badging was never applied, the name stuck. 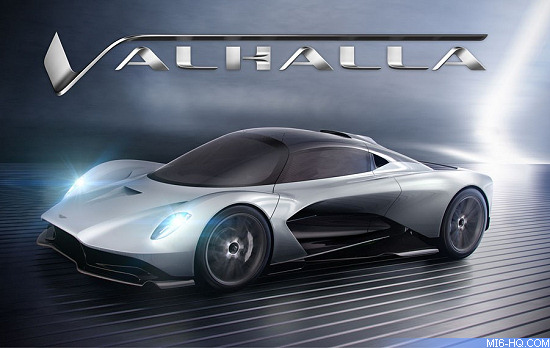 The first time the Vantage name appeared was on the flanks of the DB5. Still, it remained a name reserved for the most potent model derivatives until 2005, when the Vantage became a model line in its own right. Fourteen years later that acclaimed family of V8 and V12-powered models is remembered as the most successful in Aston Martin’s history. Since then the all-new generation of turbocharged Vantage has fast forged a reputation as the most dynamically focussed series production Aston Martin ever.

Together with the recently announced Vanquish Vision Concept, Valhalla continues this proud, seven-decade old ‘V’ car naming strategy, providing an evocative and powerful moniker fit for one of the world’s most compelling ultra-high performance cars.

Aston Martin Lagonda President and Group Chief Executive Officer, Andy Palmer said: “Aston Martin model names always attract a lot of attention. They do so because they invariably capture an emotion or tell a story. In following the Valkyrie we knew the Aston Martin Valhalla needed to make a strong statement of its own, yet also offer continuity and a clear connection. Norse mythology contains such powerful language and rich storytelling it felt only right that the AM-RB 003 should follow the Valkyrie’s theme. For those fortunate enough to own one I’m sure they will recognise and appreciate the name’s connotations of glory and happiness, for there can be few more hallowed places than the driver’s seat of an Aston Martin Valhalla.”