More photos and video has emerged from the Bond 25 filming in the Scottish Highlands this week.

It appears that two separate sequences are being shot on location. The first is understood to be an extension of a scene captured in Norway that saw a Toyota Land Cruiser being followed by Range Rovers over the Atlantic Ocean Road. It is likely that Scotland is doubling for a continuation of the Norway sequence. The action took place on the Ardverkie Estate, near Newtonmore. 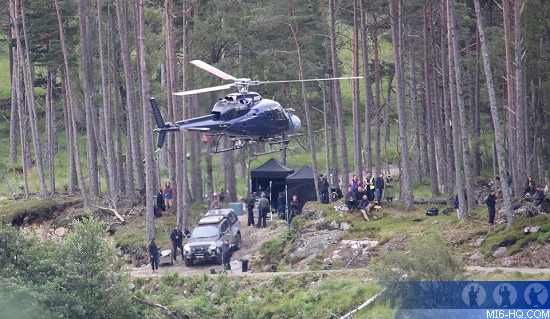 A second sequence was captured today by a motorist who was stopped in traffic in the Highlands when the Bond 25 crew closed a road briefly to film the new Aston Martin Valhalla. A camera car and a helicopter were used to capture the action.

No Time To Die (2020) Bond 25 will shoot on location in Aviemore, Scotland