This Mercury Cougar Convertible is one of a tiny handful (some sources say three, others four) purchased by EON Productions for use in the filming of 'On Her Majesty's Secret Service' (1969) starring Australian actor George Lazenby in his sole outing as 007. Co-starring with Lazenby were Telly Savalas as super-villain Ernst Stavro Blofeld and Diana Rigg as the Contessa Teresa 'Tracy' Di Vicenzo, owner of the Mercury. 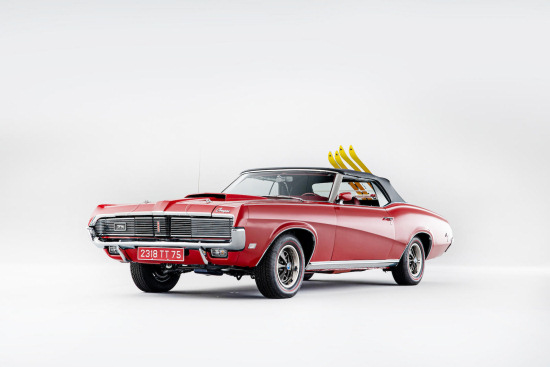 EON Productions ordered this car on the 30th January 1969. It was scheduled to be built on the 12th February but was actually completed six days earlier on 6th February 1969. The car was flown from the USA to the UK and registered on 13th February 1969. Copies of the original Ford Motor Company paperwork and invoice are on file, listing this individual car's specification and confirming its 'Bond Movie' connection. According to the accompanying Marti Auto Works Elite Report, only three cars were finished in Candy Apple Red with a black roof, indicating that only three were supplied for the film. The Marti Report lists the following original features:

The Cougar is believed to have been flown to the UK as a special order and used for the barn scene filmed at Pinewood Studios, which if nothing else spared it from any damage. Most of the film's action takes place in the Swiss Alps and the Mercuries were fitted with a chrome ski rack for Tracy's Kneissl skis, which were the 'must-have' brand of the day. The car's red French number plates are temporary visitor plates. The Cougars were used in four scenes: the opening scene on the beach; the bullfight; the ice race and chase; and the barn scene. 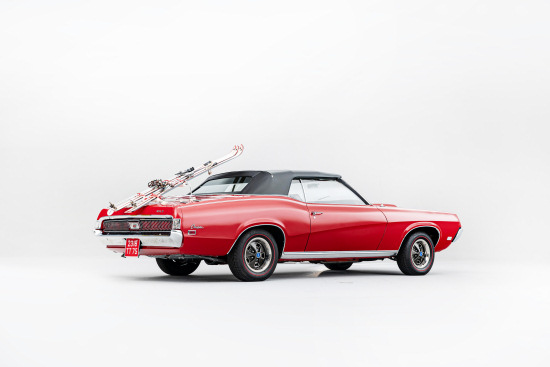 The Ian Fleming Foundation (IFF) which looks after 40 screen-used James Bond vehicles, believes that perhaps four Cougars were used in making OHMSS: one was very badly damaged during the ice race sequence and subsequently scrapped; another resides in Spain; one has been owned by the IFF since 2008; and the remaining example is the car offered here. Subsequent owners are not known until 1976 when the car was registered to one Brian De Mesquita. Since then the Cougar has had seven other owners including the current vendor, who acquired it on 10th June 1990 (full list of owners on file). The Mercury had been advertised in Exchange & Mart in May 1990, with no mention of any James Bond connections. 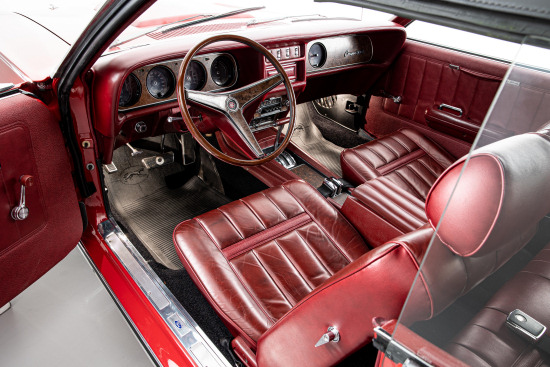 Only completed in 2020, the car's full 'last-nut-and-bolt' restoration included stripping and repainting the chassis and all body panels; fully rebuilding the engine with new pistons, Crane camshaft, HV oil pump, etc; fully restoring the Holley carburetor; fitting the correct Ram Air induction, air filter, snorkel, and heat shield; overhauling the alternator and starter motor; rebuilding the automatic transmission; and rebuilding the rear axle with Traction-Lock limited-slip differential by Hauser Racing. The body panels were acid dipped prior to priming and painting in the correct Candy Apple Red, while the convertible top and interior trim were done by specialists Piper Trimmers in Sparkford. 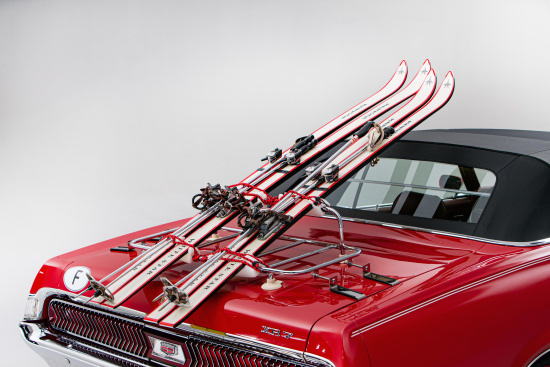 Only 20 miles have been covered since the restoration's completion and this historic 'James Bond' Mercury Cougar is presented in commensurately excellent condition, worthy of the closest inspection.