Socks for dinner, death for breakfast

The London Sock Exchange has launched a very special collaboration with the James Bond franchise, in celebration of 60 years of Bond. From their London studio, The London Sock Exchange has worked with the Bond team to design a limited-edition set of six socks which pays tribute to six decades of the world’s most famous spy – presented in a box enriched with some hidden features which Q Branch itself would be proud of, including a hidden sliding panel detailing a timeline of all 25 Bond films. 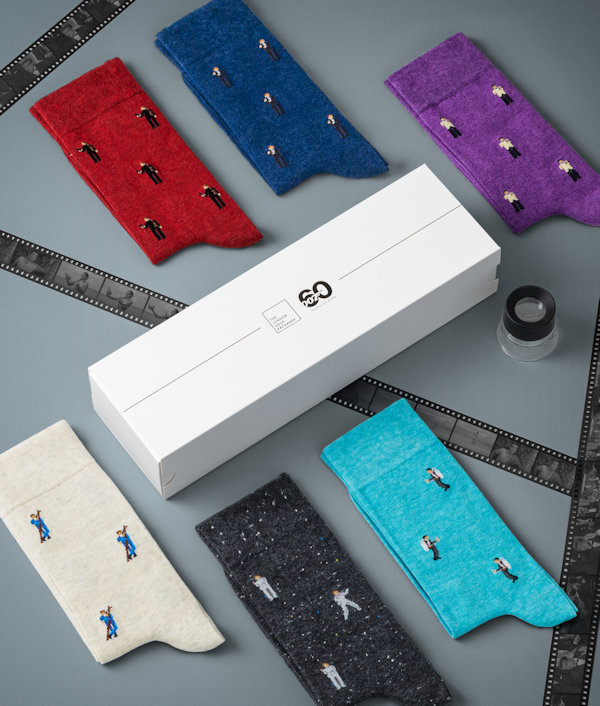 Dan Zell, Co-Founder at The London Sock Exchange said: “James Bond is such an icon of British style and British design around the world – and working with the team at 007 on this special collection for Bond’s 60th anniversary has been a joy. We’re incredibly proud of the socks and very special giftbox – they’re full of the vibrancy, detail and ingenuity you’d expect from a 007 production, distilled into sock form. I can’t wait to see them in action around the world soon.” 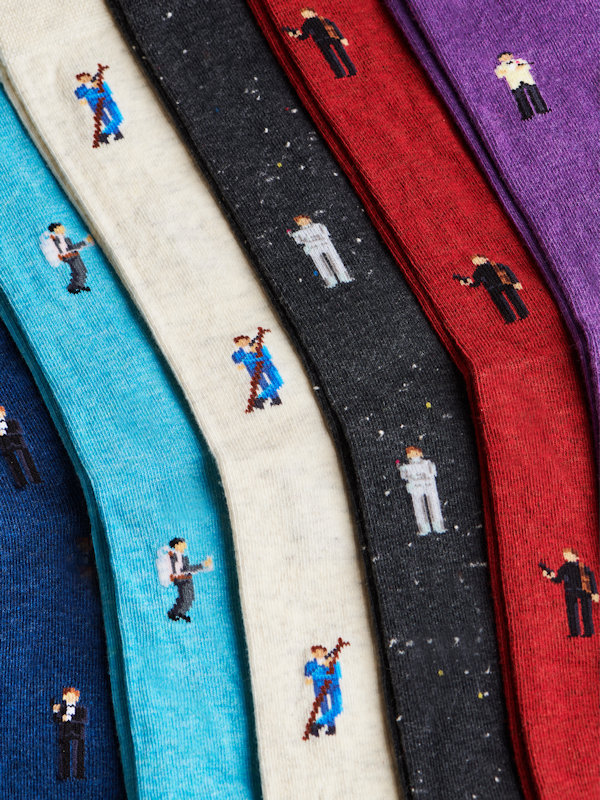 The Jetpack
Inspired by the many tools, gadgets and technologies which have been issued to 007 by Q Branch: from the not-so-ordinary black leather case in From Russia With Love (1963) all the way to the Q-DAR in No Time To Die (2021). Our pick of Bond’s gadgets arrived in Thunderball (1965): as Bond escapes from the roof of a SPECTRE-infested château, he deploys his special-issue Bell Rocket Belt to take to the skies and evade his adversaries once more. It’s this iconic moment we pay homage to in ‘The Jetpack’. 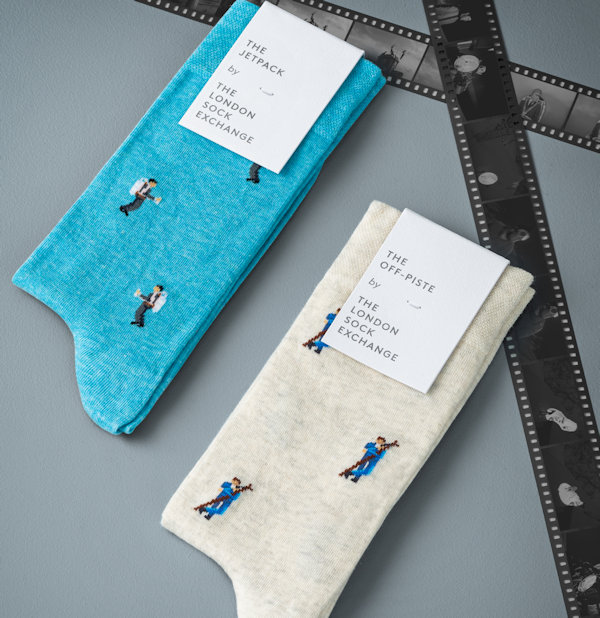 The Off-Piste
A mix of epic mountain scenery and dramatic snowy slopes have been the perfect conditions for 007 to take on his adversaries over the years: from Bond evading his would-be assassins in the opening sequence to The Spy Who Loved Me (1977), to mistreating that Stradivarius as he careers down the mountains in The Living Daylights (1987), to his thrilling chase of Hinx through the Austrian snow in Spectre (2015). Our pick of Bond’s snow moments is the first time we see Bond take to the mountains, in On Her Majesty’s Secret Service (1969). As 007 escapes Blofeld’s lair high atop the Swiss peak, Piz Gloria, he tackles everything from ski-slopes to a bobsleigh run to an avalanche – all while sporting an immaculate, iconic, royal-blue ski-suit. It’s this iconic sequence which has inspired ‘The Off-Piste’.

The Undercover
In 60 years’ worth of missions, we’ve often seen 007 working in full stealth mode. From an assasination assignment in Bratislava (The Living Daylights, 1987) to infiltrating the Ice Palace, Iceland (Die Another Day, 2002), to picking up the enemy’s trail in the ruins of the former MI6 HQ in London (Spectre, 2015), Bond works best when he’s lightly armed, disguised under the darkness of a black turtleneck. It’s also how we see Bond in one of our favourite 007 sequences, as he arrives on the Caribbean island of San Monique in Live And Let Die (1973) – armed only with his wits and Smith and Wesson Model 29, carried in a brown leather shoulder holster. It’s this iconic moment which has inspired ‘The Undercover’. 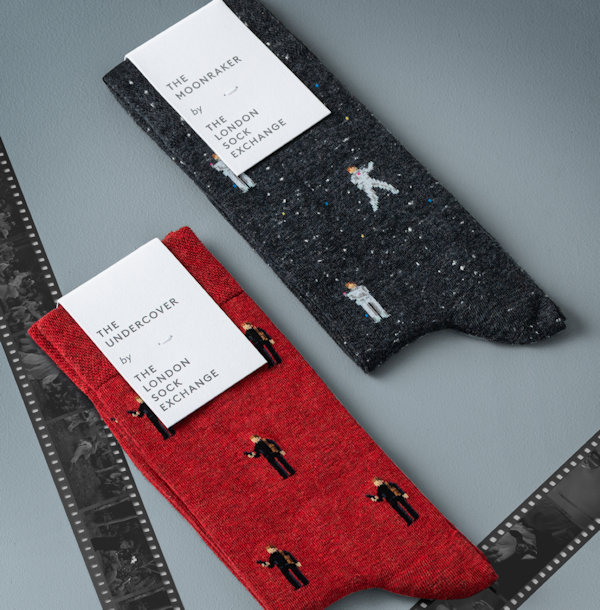 The Moonraker
From Japan in the East (You Only Live Twice, 1967) to San Francisco in the West (A View To A Kill, 1985), to Iceland in the North (Die Another Day, 2002) and Madagascar in the South (Casino Royale, 2006): for 60 years we’ve watched 007 journey to the farthest flung corners of the globe as he doggedly undertakes his missions. No journey has taken James Bond anywhere more exotic than his destination in 1979’s Moonraker – in which 007 ventures off the planet and into outer space for the very first time. It’s this groundbreaking, gravity-defying mission which we mark in ‘The Moonraker’.

The Agent
007 first appeared wearing the iconic ivory dinner jacket in the pre-credits sequence to Goldfinger (1964). Since then, we’ve seen Bond sporting similar evening suits in tropical conditions around the world: from his first encounter with Plenty O’Toole in Diamonds Are Forever (1971), to facing off against Kamal Khan and his Fabergé egg in Octopussy (1983), to riding the Oriental Desert Express across the North African desert in Spectre (2015). It’s been a timeless look for the world’s most famous spy – and has inspired this reissue of ‘The Agent’ design in an all-new sunset purple colourway. 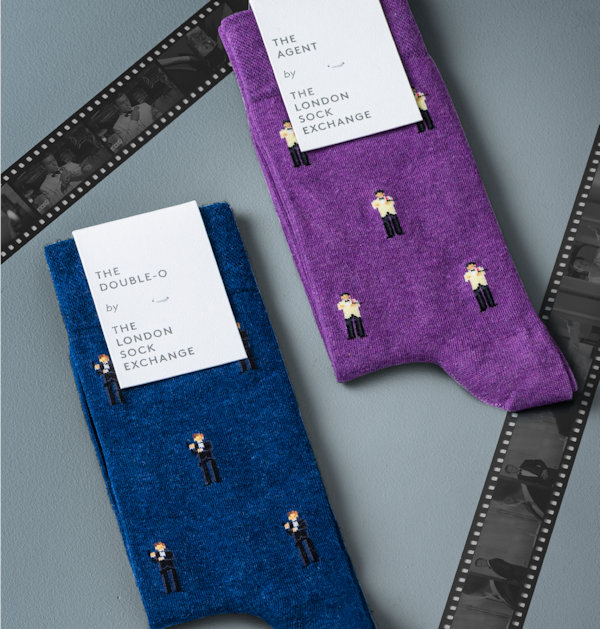 The Double-O
For the last 60 years, we’ve seen every incarnation of James Bond appear in a dinner jacket. It’s how the world met 007 in Dr. No (1962), and the outfit has been his signature look across generations since. By way of tribute, we’ve re-issued the ‘The Double-O’ design in an all-new midnight navy colourway.

The socks are available in one-off special edition giftbox (£72) from thelondonsockexchange.net