How does the second title in the new series of James Bond adventures by Dynamite Comics follow on from the warmly received VARGR?

EIDOLON was published originally as a six-issue comic book series by Dynamite Comics from June to December 2016. It will be released as a collected hardback graphic novel in March 2017. 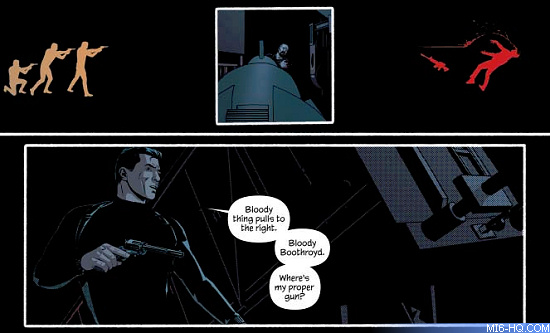 Following the successful six-issue comic book 'VARGR', writer Warren Ellis and illustrator Jason Masters continue the exciting adventures of their James Bond 007 in the next chapter, 'EIDOLON'. I mention "their" James Bond because this Bond universe really is its own thing. Probably the first step every Bond fan takes when diving into a new 007 product – be it a videogame, a book, a movie or, indeed, a comic book – is discerning which rules and attitude are being established this time and, more importantly, how far this Bond is willing to go. One of the more surprising elements of the VARGR chapter was Bond's inexorable relentlessness and a certain transgressive brashness he displayed in far greater doses than in the last few decades of the cinematic 007, including the grittier and rougher Daniel Craig film era. Though still a charmer and quipster, Bond means business quite a lot and when he does, the bad guys are likely to lose a limb and gallons of blood. This Bond doesn't celebrate violence, however, but is merely efficient; and the writers won't shy away from making that particular talent bloody obvious – no pun intended.

It's not just through bold stylistic choices that the writers put their own stamp on this Bond. They deliberately depart from both the pre and post 'Casino Royale' movie canon by introducing, amongst other things, an entirely new SPECTRE. EIDOLON pitches MI6 against MI5, first and foremost because of the so-called 'Hard Rule', already mentioned in VARGR, which, simply put, prohibits a 00 like Bond from carrying weapons while on home territory, an evident sign of great portent. A precarious investigation of a blown MI6 cover in the USA, however, reveals the presence of a forgotten enemy in MI5's deepest layers. Remnants of a post-WWII crime organization known as SPECTRE have surreptitiously begun resurfacing like weeds in a freshly mowed lawn, ready to strike hard while British intelligence is incrementally rendered weaker. With the threat now exposed, M rushes Bond into action to fence off a mysterious evil. 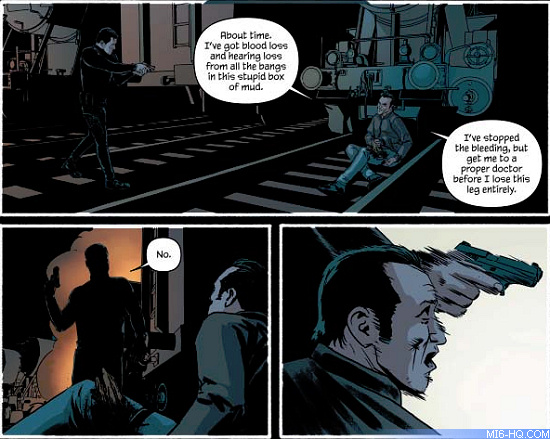 In case this sounds somewhat familiar, the 24th Bond film, aptly titled 'SPECTRE', also deals with a domestic menace aimed at the 00 section, disguised as a political reformation of the intelligence community but actually serving a sinister conspiracy to give the titular organization full control over governmental decision-making. EIDOLON, however, turns left where the movie SPECTRE turns right. Instead of taking the dark organization much closer to Bond's private life than many a Bond fan has deemed comfortable, the comic book more or less returns to Fleming's days, but with a peculiar twist. This SPECTRE isn't synchronized with the modern times in which the comic book Bond operates but was defeated before and is now patiently rebuilding its strength as a ghost cell within MI5. Such an approach is a lot colder and much more impersonal than what the recent movie did and is therefore also more intriguing since SPECTRE is treated as an enigmatic self-supporting structure we end up learning very little about. Even if Bond can bring its current pawns and knights down, his victory over this SPECTRE may be, at best, uncertain.

Experienced comic book readers will agree that good writers can set up and finish a compelling story on a six issue canvas, while others often fail to have delivered a satisfying conclusion by the last page of the final issue. Part of what makes the VARGR and EIDOLON comic books so endearing is how their story picks up momentum fast, holds on to it, while expertly alternating between surprising twists and great action sequences, and climaxing hard and with maximum fulfillment. EIDOLON furthermore doesn't forget that there's a time to go big and fast and a time to go for the less-is-more strategy. But no matter how many bullets are or aren't flying off the page, Bond remains the epitome of cool, a personal sentiment I saw firmly cemented in the final panels of the book. His actions, words, and resilient disposition impel me towards generous compliments. This Bond is awesome! He's also incredibly ruthless. One scene from the fourth issue shows Bond performing a Jack Bauer type of torture interrogation. In a sort of unintentional – or is it? – reversal of the infamous torture scene from 'Casino Royale', EIDOLON takes away all remaining doubts that this Bond might be perfectly suited to tackle some of the hard-hitting problems we're trying to deal with in real life today. In that sense, the EIDOLON Bond is a surprisingly elegant fusion between the Fleming Bond and a hard-core modern Bond. On the one hand, we meet a blonde Felix Leiter with prostheses where sharks had once been celebrating their bloodthirstiness – a genuine reference to Fleming; on the other hand, we experience how thugs are gelatinously being squashed in some of the more visceral moments of the book, which is pure 21st century Bond.

One key element from the movies and Fleming novels that is missing - though I wouldn't say sorely missing - in these comics, is Bond's healthy appetite for the opposite sex. Though hints of flirting shimmer through some of the juicier dialogues, the blatant womanizinging and painfully obvious double entendres are being suppressed with astonishing persistence. Bond's sexual magnetism is hardly ever a stated fact. Bond rather smokes a cigarette with a beautiful woman than share a bed with her. It's a unique case of "Bondus interruptus" which I have briefly contemplated and concluded to be a good thing. Rather than seeking excuses to get Bond to sleep with a women, the story prefers to progress naturally and without any "check-list" obstacles. Tantamount to an admirable dose of self-discipline and restraint, this is yet another case of the authors prying only what serves their story from the proverbial "Bond formula" and leaving potential hindrances untouched. If future comics were to pull 007 under the sheets with a drop-dead gorgeous dame, it might be all the more meaningful because of this.

With naturalistic yet colourful illustrations, EIDOLON adheres to a visual splendour which cannot be overstated. Unpretentious and clean, but with a fine sense of detail and geometric balance, the drawings in the book adequately fit the general mood of a sophisticated spy thriller. Bond himself is charitably treated with great looks and M, Q and Tanner, despite making only brief appearances compared to Bond's, are indulged with charisma, spunk and congeniality through their facial expressions alone. Moneypenny is the only one who comes suspiciously close to her current cinematic alter ego, played by Naomie Harris. And yes, some members of the MI6 staff do commit to field work; it'd be a bit silly if that got in the way of having a good time with EIDOLON though.

It cannot be stressed enough that this book is no copycat of the Craig films, but an entirely original experiment which, after two effective chapters, deserves the highest praise. With HAMMERHEAD, BLACK BOX and the Felix Leiter spin-off currently in the works, the future of the Bond comics looks secure enough. Though Ellis and Masters aren't fixed for an immediate return to the Bond comics, their two chapters in Dynamite's current 007 comic reboot have set the bar tremendously high. Far too often are comic book adaptations of movie icons – which in all fairness is still what James Bond is first and foremost – dismissed as a redundant, low-quality by-product of a money hungry franchise. Dynamite and its artists, by contrast, treat the Bond comic with a heart-warming reverence that most Bond fans will undoubtedly appreciate. Even if you're not a comic book reader, it might be prudent to pick up a copy of VARGR, if you haven't already, and also of EIDOLON. They are pleasant, balanced yet at times startlingly daring thrill rides which explore many of the unique possibilities the comic book medium has to offer where other media fall short. Hugely recommended.