An Evening With Anthony Waye

Producer of 11 Bond films, plus 'Star Wars' and 'Carry On', will appear next week in London for a Q&A session

The Production Guild of Great Britain kicks off a brand new series of events this month, designed to take the public behind the scenes of film and TV drama production by hearing from some of Britain’s most experienced production professionals.

They kick of their series by interviewing a stalwart of 007 and British cinema, Anthony Waye. Born in London in 1938, Waye has been working in cinema since his early 20s, beginning as assistant directors on films like 'Sink the Bismarck!' and 'Carry On Jack' he served with George Lucas on the original 'Star Wars' before joining the Bond family with 'For Your Eyes Only', again as assistant director. He quckly began to have more influence in the production of the Bond film, organising locations, permits and logistics on Bond films throughout the 1980s and 1990s. He rose to the rank of Execuitve Producer on the Daniel Craig era films, where he told 007.com the role covers "almost everything including preparing a draft schedule based on the first draft script, early location recces to find locations or which country to work in, having input on the budget, keeping an eye on what departments are spending." 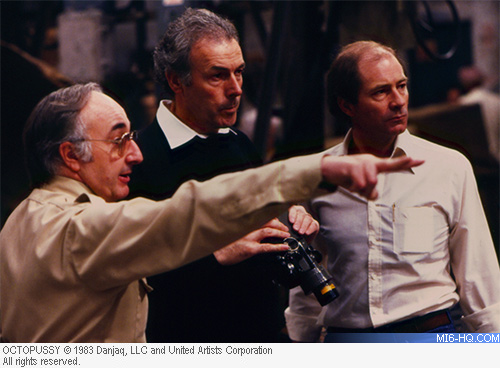 Above: Producer Anthony Waye (right) on the set of Octopussy with John Glen and DOP Alan Hume

In totaly Waye worked on 11 Bond films, with 'Skyfall' being his last.

He will discuss his fifty year-long career in film at a Production Guild event on Wednesday, 15 November 2017, at 7:30 at The Courthouse Hotel, 19-21 Great Marlborough Street, London W1F 7HL. Tickets are on sale at Eventbrite.