"When I tell you, push the gas to the floor. Now!"

I floored the throttle as instructed, sending the beastly beautiful Aston Martin DBS into wild acceleration. Insane, in fact, breaking 60 mph in 3.4 seconds and 100 soon after.

The needle showed 140 then 150 but we still weren't done. As the half-mile marker flashed by my brain told me to ease off. I had to really battle instinct as the end of the mile - and a sharply banked right-hand bend - got closer and closer.
I fought the fear and continued through 160 then 170 mph.

"Break now", he told me, as I eased the Beast to a more manageable 100 mph and soon down to 40 as I took the right-hand bend. 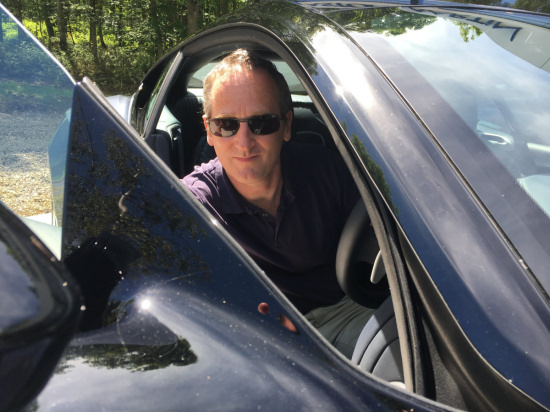 David Leigh behind the wheel

One of the circuits is like an alpine road with tight curves with elevation changes. On this circuit, the stunt team performed the stunt in Casino Royale where the DBS rolled seven times as Bond swerved to avoid Vesper.  In reality, there is no way to flip an Aston so easily. After attempting the roll by using a ramp on one side they resorted to fitting an air cannon which fired downwards and the car flipped. Aston Martins are just completely stable.  The mile from a standing start was my third drive of the day, which had started at 9am at the Aston Martin visitor centre within the Millbrook facility.

Rapide
My first drive of the day was in a Rapide. I was driven to the hill circuit with my instructor explaining the breaking and acceleration points as he threw the car around the track. One of the remarkable things is how calm the instructors are, all the time. They are driving at absurd speeds while holding a conversation. At times I could hardly breathe!

As we reached the bottom of a slope and started to climb I could really feel the G-force push me down into the seat. While I attempted to film the entire lap I fought to keep my hands in the air as my phone’s camera dipped towards my feet. Then my stomach lurched as we put space between car and road.

My driver pointed out the repairs in the tarmac where the road had been damaged by the Casino Royale roll. It took a moment to recognise it as Bond had been driving in the opposite direction. And then it was my turn. Following the instructor’s instructions, I accelerated and braked, constantly thinking of road position to corner as fast as possible and, apparently insanely, often on the wrong side of the road over blind summits. As the hill circuit looks and feels like a public road it is completely unnerving to drive like this, instinct screaming at me to take care of traffic heading the opposite way.

DB11 Volante
Next up was the convertible DB11 Volante, which my instructor drove to the 2-mile speed bowl. There you have five lanes on a banked circle with each lane having a progressively higher minimum speed. Almost immediately we were in the top lane at 100 mph and soon up to the maximum 130 mph you can do without wearing helmets. My driver then dropped down to 100 to show how the car would sit there. He took his hands off the wheel to demonstrate. 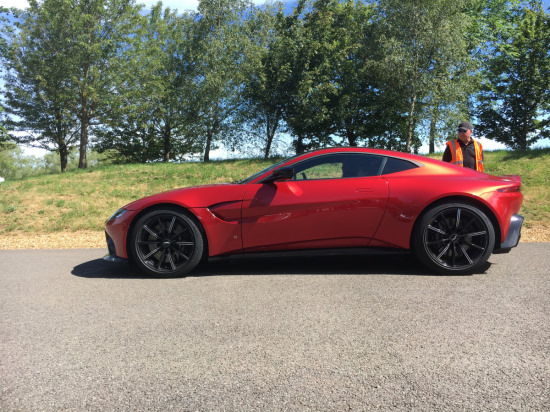 With the car doing a permanent left-hand curve it was slightly alarming to see the Armco barrier in front of me all the time. But when it came for me to drive two circuits it was terrifying. I’m used to driving left-hand drive cars but now I had the crash barrier right next to me. He asked if I wanted to have a go hands free, so dropped to 100 mph. It took a little while before I could even remove my hands slightly but soon after I managed to do it properly. I understand the physics behind it all but it just doesn’t feel like it should be okay.

Driving with the hood up, I had completely forgotten the car was convertible. Only when we swapped places for the drive back to the visitor centre did I remember. You just don’t get the noise you’d expect. The soft top apparently has eight different layers to achieve that low level of noise. As it was a lovely sunny day we dropped the hood and drove back in the sunshine.
DBS. And then it was to the mile straight where on my first run I managed 173 mph.

While this is easily the most frightening thing you’ll do in an Aston Martin, that fear isn’t due to the speed. I’ve driven cars at 80 mph that felt far less stable than the DBS. The cars remain remarkably rock solid on the road at all times.  The fear comes from the tight right-hand bend at the end of the mile. It just doesn’t seem possible that the car can reduce speed so dramatically, but the brakes are phenomenal.  The second time I did slightly better and reached 176 mph. That’s an absolutely insane 283 km/h. The fastest anyone did was 180 mph. 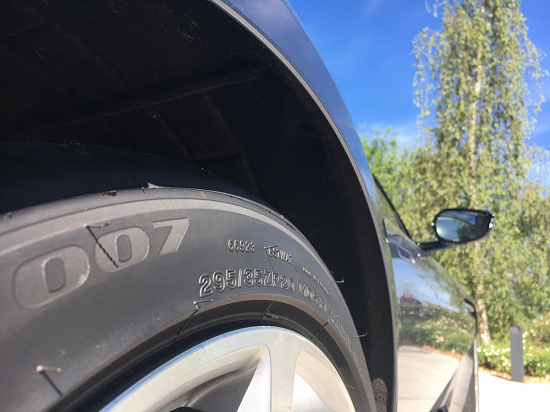 The tYres were suitably numbered

Ben Collins Demo
Next, we were given a bit of a break, presumably to allow us time to digest the fantastic buffet lunch put on by Aston Martin. Taken to a concrete circle by minibus, it was the turn of 007 stunt driver Ben Collins to show us his stuff. Although he didn’t work on Casino Royale, Collins has worked on a number of Bonds including the three-minute car chase at the beginning of Quantum of Solace.

After the track was drenched with water he took a DBS Superleggera through its paces, skidding the car sideways, flipping it round and generally just doing insane stuff. He finished by burning rubber on the dry part of the circuit, enveloping the onlookers in a cloud of black smoke. The tyres were red hot when he finished and the gleaming white paintwork covered in molten rubber.

The Outer Handling Circuit
After that, it was my turn to sit in the car with Collins as he drove round the technically challenging Outer Handling Circuit. This one required that we wear helmets. On the first lap he continued to chat, asking what I did and where I’d come from. But as he threw the car around I stopped talking, anxious not to disturb his concentration.

“Are you ok there?” he asked shortly and continued with the conversation. Nerves of steel.

After that first lap, he notched up the pace. A lot. While the first lap was pretty intense already, the second was positively scary.
Vantage. And so my final lap of the day was to be in a beautiful Vantage in deep metallic red. I was already in love with this car from its looks alone but actually driving it was something else. 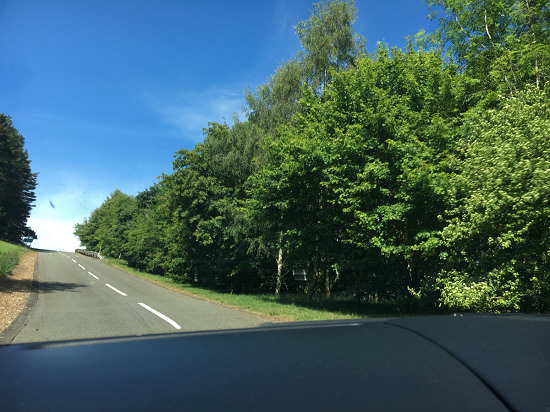 Once again I did the hill circuit, with the instructor pointing out landmarks to judge braking and acceleration points and road position.  But I drove the partial second lap with the car in sports mode. I went as fast as I dared but nowhere close to the way the pro drivers took the circuit.  It was seriously noisy, the car shifting gears like it was insane causing the engine to scream while the exhaust popped and sputted.

All in all, it was an absolutely excellent day, relaxed at the visitor centre but with adrenaline flowing while on track. Aston Martin and Secret Cinema really made sure we were looked after. The drivers are all easy to talk to and, really, the best salesmen Aston Martin could have. They’re passionate about driving and know the cars inside out and really help regular drivers get the most out of the day by pushing us far outside our comfort zones.

Recruited as part of ‘Operation Wild Card’, attendees will join either Q or M Branch. All audience members will be given the opportunity to develop their own character, receiving a thorough MI6 brief containing an alias, dress code and training suggestions to help them prepare for a night of high stakes, sophistication, and deception.

Blurring the lines between fiction and reality, Secret Cinema Presents Casino Royale will completely immerse audiences into the glamorous and action-packed world of the iconic and legendary British spy.