Mark Mawston reports from the Bond At 60 panel discussion

The start of the large-scale BFI celebrations of all that is Bond began on Friday, September 30th with a discussion by a select panel of 007 alumni at the NFT before a screening of the film that started it all: 'Dr. No'. Initially, the talk was due to be with both Michael G. Wilson and Barbara Broccoli, but it was announced that the latter would no longer be attending.

However, the cast that was assembled was a great mix of those both from in front and behind the camera. They included writers Neal Purvis and Robert Wade, series casting director Debbie McWilliams, actor Rory Kinnear, production designer Mark Tildesley and associate producer Gregg Wilson. The talk began with the superb new trailer that Prime released to mark 60 Years of Bond on their streaming service and this momentum held for most of the talk, which was conducted by journalist and broadcaster Samira Ahmed. 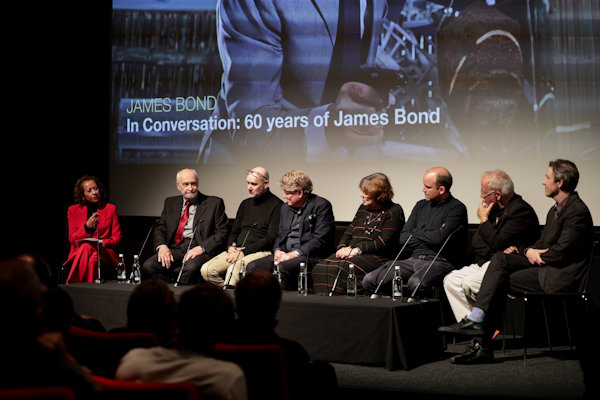 Michael G. Wilson seemed very relaxed and more animated than I've seen him on previous occasions, cajoling responses from the panel. Those gathered close in the audience were often prompting the likes of Pervis and Wade several times as to where inspirations were taken, and from which Ian Fleming novel, far quicker than the duo could remember themselves. There were some insightful reminisces from Michael G. Wilson himself regarding Cubby Broccoli and Sean Connery. Rory Kinnear said he was unqualified to be on the panel but was easily the star of the show as far as quips went. Mark Tildesley was the most understated when he announced that he was responsible for the idea and staging of the Queen's parachuting with Bond at the Olympics opening as though that was the kind of thing that happens every day!

Most of the talk was interesting but the final question posed by Ahmed about Bond's appropriation of Severine in 'Skyfall', after she obviously worked in the sex trade, seemed to ruffle Wilson a little, who said there were two sides to every story regarding how the situation could be perceived, although Ahmed saying that "perhaps he could just ask in future" did sum up the way things are seen now and how things have changed in the decade since the film's release. It was a shame that this was the last question before things were brought to a close and that the talk ended a good thirty minutes before the posted time.

I'm sure a Q&A would have been beneficial as those asking the questions would have asked some poignant questions about a series and a character that some on stage seemed to admit that they know less about, not seeing the films they cast or appear in as often those attending, though that's no great shock as these films take up so much of their lives. They, like the Bond series, like to move on. Let's hope it's in the right direction as one thought that Barbara Broccoli's no-show and lack of Q&A were attempts to avoid at all costs inevitable questions about the next 00 actor and what legacy that ending in 'No Time To Die' will have on the franchise. Is there really a 'Craig Universe' rather than simply Universal Exports? We all left a little too early and none-the-wiser as to know for sure, but that didn't stop the more in-depth debates between those in the audience in the bar, and corridors, post talk and pre-screening of 007's first cinematic mission.

Mark Mawston has met many of the stars of the Bond films- both those in front of the camera and those, like him, behind. Just seeing how much work goes into the films has made him an even greater fan of 007.