Daniel Craig took to the stage at the Odeon Luxe Leicester Square on Friday 24 September for an exclusive, live event, hosted by Scottish presenter, Edith Bowman. Under the banner of BAFTA’s Life In Pictures series, the Bond star looked back on his thirty-year career ahead of the World premiere of ‘No Time To Die.’

The 90-minute Q&A opened with a montage of clips to the strains of Paul McCartney’s Live And Let Die. Craig greeted Bowan wearing a dark grey suit complete with blue pocket square and spotted tie. He began this remarkably candid interview by admitting, “I don’t watch my old stuff ever. I try and avoid it if I can,” but said, the reel brought back many happy memories. 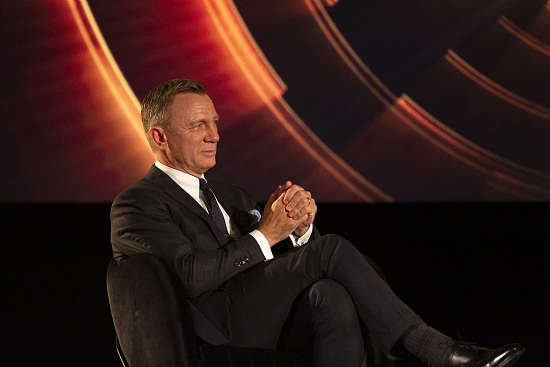 The audience were reminded of Craig’s tenure as James Bond with an extended clip from each of his 007 pictures. He recalled, “People used to say, ‘Oh you must have always wanted to be James Bond.’ I went well, yeah, as a kid I kind of thought about it. I wanted to be Spiderman as well, but I just thought it was never going to happen.”

The recent documentary, ‘Being James Bond,’ highlighted how Craig initially declined the role but he said with a laugh, “Barbara had already made up her mind. If you know Barbara, that means she's made up her mind.”

In 2005, Craig was enjoying a “successful and satisfying career” working on a broad range of eclectic projects with directors such as Steven Spielberg and future 007 director, Sam Mendes. He felt he did not necessarily need or want the Bond gig. However, Craig revealed that when he first read the script for 'Casino Royale' he thought, “It was blinding.” Craig recalled the moment in the movie when the barman asks Bond if he would like his Martini, shaken not stirred, “It was written in the script, [as] ‘Do I look like I give a fuck?’ As soon as I read that I said, ‘How can I say no to this?’” Craig told Bowman that he made a list of pros and cons, “…and the pros outweighed it. One of my closest friends said, ‘This doesn’t happen to people. You’re going to regret it for the rest of your life if you don’t do this.’”

He credited producers Michael Wilson and Barbara Broccoli for giving him the opportunity to reinvent Bond and for inviting him to take part in the creative process of each of his five films. “Casino, I knew it was a good script and I knew when we were making it, it was going to be a good film.” But it was not until the premiere that Craig knew his interpretation of Bond had worked. Pointing up to the balcony he recollected, “I was sat up there with the Queen, as you do, and we got to the opening credits after the fight in the bathroom and everyone just burst into applause…I was shaking.”

The star talked with great pride at having worked with Judi Dench, revealing that when he was a child, his mother had a photograph of the actress stuck on their refrigerator. Pressed on his favourite Bond movie he said, “It’s going to be really hard not to say 'Casino Royale' because that was the one that kicked it all off.” He later admitted the best Bond of all time was 'Goldfinger'.

Craig reminisced about his own love of film, “I lived in a small town on The Wirral and there was one cinema…I mean one tiny little cinema, a proper fleapit, and all the movies that used to get to us had literally been around the country five times before they got to us, these scratchy prints. But they showed everything and changed the movies every three days.” He mentioned the films that influenced him such as Ridley Scott’s ‘Blade Runner’ (1982). Craig spoke with great affection about his early years in the business and in particular, cited Brian Lee of the National Youth Theatre, casting director Mary Selway and his agent Sally Long Innes, as the individuals with whom he owes much of his success. 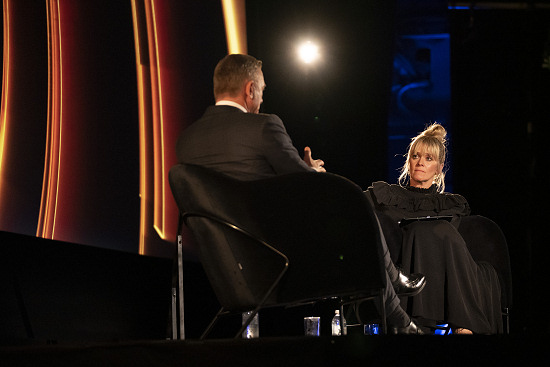 Craig paid an emotional tribute to filmmaker, Roger Michell who had died two days earlier. They collaborated twice, ‘The Mother’ (2003) and ‘Enduring Love’ (2004), two early examples of Craig’s superb talent. “The sadness is that we kept on talking about the fact that we’d make a third [film], but we never got the chance.” That third project was going to be 'Quantum of Solace' which Michell pulled out of during early pre-production.

Towards the end of the discussion, Bowman quizzed Craig on 'No Time To Die'. With only less than a week to go, he still remained tight-lipped. Craig teased, “We haven’t had a lot of gadgets in my movies. But in this movie…Cary [Fukunaga] is very into them so we have got quite a few more.” He seemed genuinely excited to finally be releasing the 25th Bond film to the world, “It’s been a weird couple of years…thank goodness we’re here and we can actually get the movie into cinemas and get people to see it. We made it for an audience. I’m desperate for people to see it.”

Closing the interview Bowman asked Craig who should be the next Bond, He paused and with a grin said, “You know what, it’s not my problem.”