On September 10th, 2022, James Bond filmmakers, actors, behind-the-scenes alumni, and authors celebrated the 30th anniversary of the Ian Fleming Foundation with a lavish party at the Petersen Automotive Museum in Los Angeles, the current home of Bond In Motion, the official 007 vehicle exhibit.

For the past 30 years, The Ian Fleming Foundation, a public benefit non-profit corporation, has been dedicated to preserving the history of Ian Fleming’s literary works, the James Bond phenomenon, and their impact on popular culture. One of the IFF's goals is procuring, restoring, preserving, and archiving artifacts relating to both Fleming and his creation. To date, the Foundation has rescued over 40 vehicles used in the spy series, and 28 of those are currently on display at the Petersen. 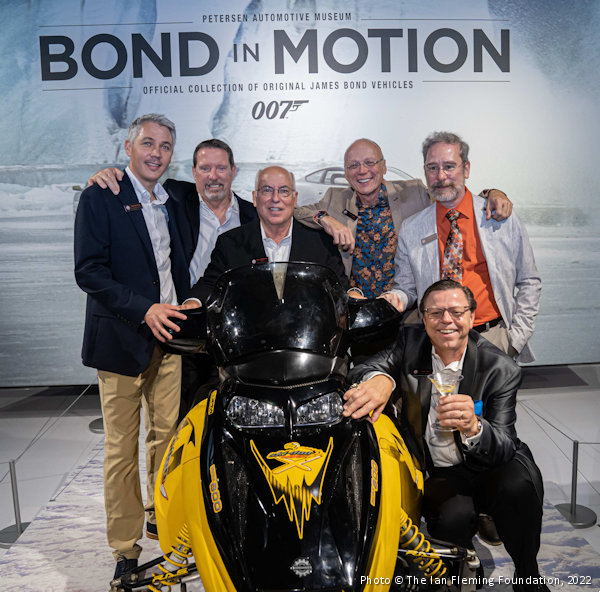 Above: IFF Board - past and present 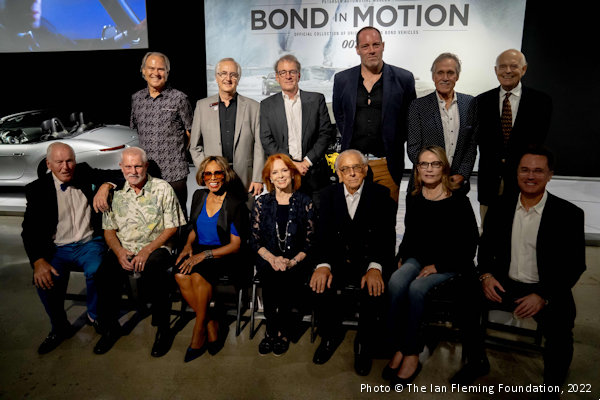 Above: Some of the special guests

Guests gathered for cocktails and were entertained by the Jayme Palmer Quartet which concluded with a James Bond melody. The proceedings were opened by IFF Director, Matthew Field, with a tribute to Her Majesty, Queen Elizabeth II, “While the Queen and her incredible service is being celebrated around the world, tonight we should remember her unique connection to James Bond. Ian Fleming’s first novel, Casino Royale was published in the year of the Queen’s Coronation, 1953. She was a great fan of the films and met all six Bond actors at world premieres. She knighted Sean Connery and Roger Moore. One of the most memorable moments of her rein to all of us in this room will be when she starred opposite Daniel Craig as 007 as he escorted her to the opening ceremony of the Olympic Games in 2012.” 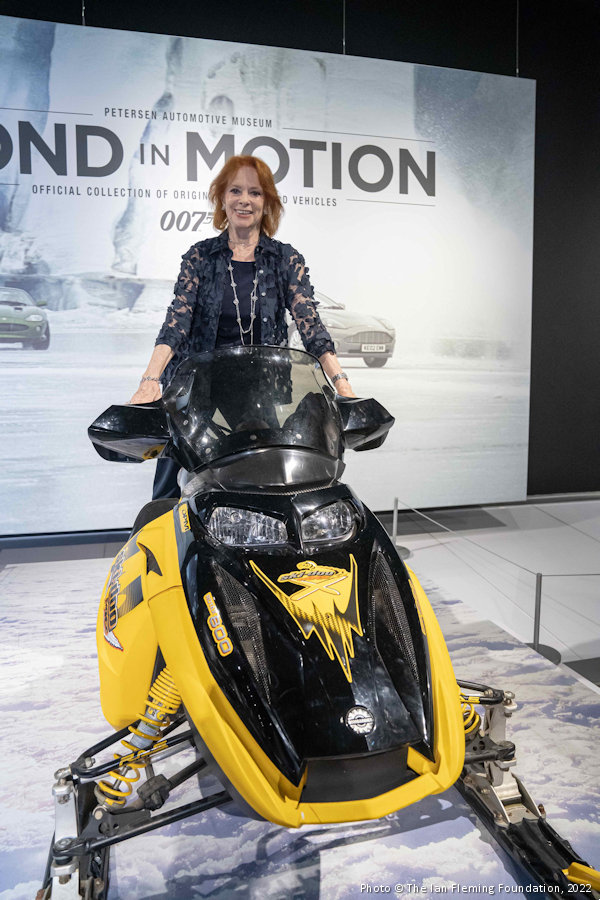 Above: Luciana Paluzzi poses with the Die Another Day skidoo

Field then introduced the Foundation’s co-founders: John Cork, Doug Redenius and Dr. Mike VanBlaricum, who remains the organization’s President. Cork who co-authored James Bond: The Legacy and also produced, wrote and directed over 30 documentaries that formed the bonus content for the James Bond Collection on Blu-ray and DVD said, “James Bond has survived because the character taps into something essential about the world we have lived in for the past seventy years, and seventy years from now, we hope that future generations can look back on this era and in some way better understand it through some of the archives the Ian Fleming Foundation has helped to create.” 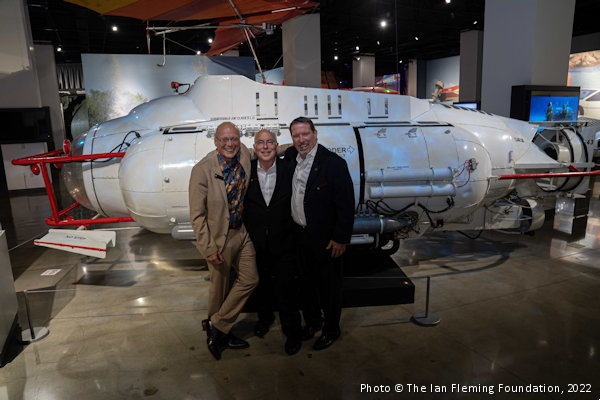 Redenius has remained the beating heart of the IFF. It has been his determination and incredible research skills that has led to so many successful discoveries of lost or forgotten Bond film vehicles. Today, he serves as the Foundation’s archivist and the safe care and responsibility of the collection lays in his capable hands. Redenius thanked the many individuals who have volunteered their time and worked on the restoration projects. “The responsibility I carry for preserving these James Bond vehicles is never lost on me. I take that assignment on with the utmost respect for what it means to future generations. An example of that commitment is wanting so much to restore the red, 1971 Mustang from Diamonds Are Forever. My pledge is someday to see that returned to its pristine condition so it can sit proudly amongst many other fabulous 007 vehicles we have here at The Ian Fleming Foundation archive.” 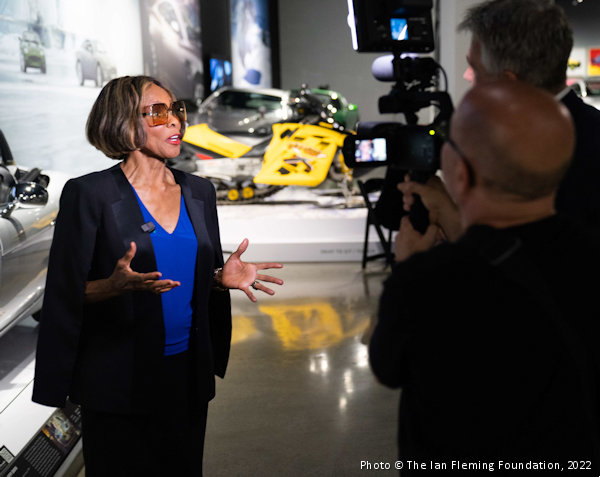 VanBlaricum recalled how the Foundation had begun, “In 1991, Saul Cooper, who did publicity for EON, gave me a call and asked, ‘Hey Mike, you want to buy a submarine?’ He was referring to the 23-foot Neptune submarine from For Your Eyes Only which was residing on the deck of the USS Intrepid aircraft carrier in New York Harbour. I called John Cork and Doug Redenius and suggested that we start a non-profit corporation to preserve the legacy of Ian Fleming’s works. Our stipulation was that we get permission from all stakeholders: Glidrose (now Ian Fleming Publications), the Ian Fleming Estate, and EON Productions. All three parties agreed to the idea.” 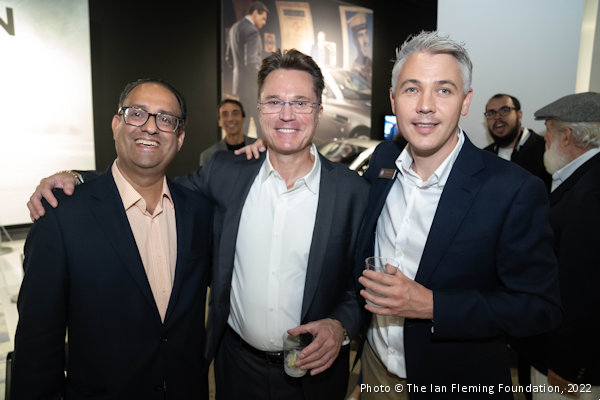 VanBlaricum concluded by emphasizing that the Foundation is most definitely focused on the future, “The IFF will continue to work with the copyright holders, continue to collect, preserve, and display iconic items from the world of Ian Fleming and James Bond. And, because James Bond holds a unique place in popular culture, we will continue to explore the history of Bond in the context of a world that has changed drastically since Ian Fleming wrote Casino Royale seventy years ago.” 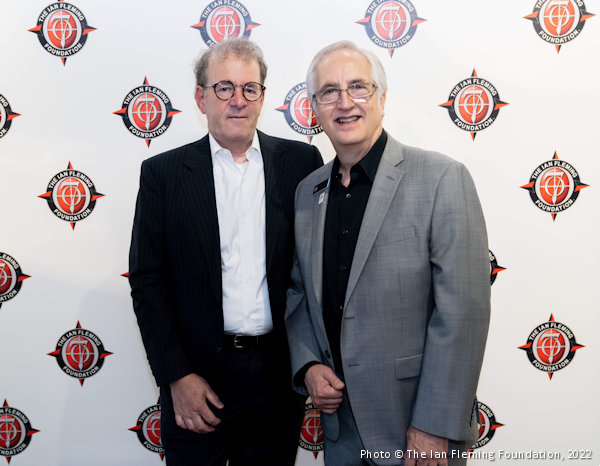 Ian Fleming’s niece, Kate Grimond, sent the following from her home in the UK: “The Foundation was a pioneer in recognizing the huge importance of Ian Fleming and his creation, James Bond. It has done a remarkable job of preserving the Fleming legacy by rescuing many editions of the Bond and associated books, purchasing important cars and other items from the Bond films, and so much else, and sharing these finds with the world.” 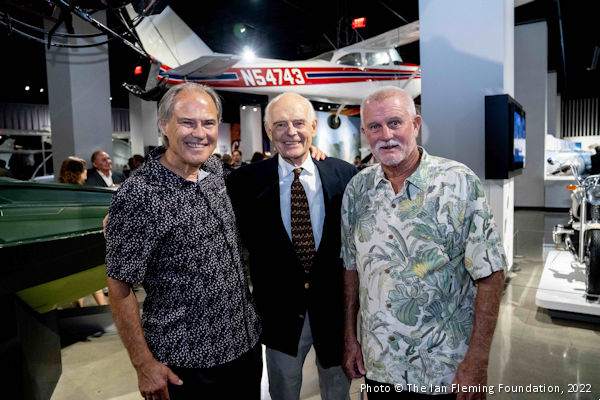 Above: Skydivers BJ Worth and Jake Lombard with camera operator Robin Browne (centre)

Ian Fleming Publications’ Managing Director Corinne Turner also sent a message from London: “I remember well when the Ian Fleming Foundation first came to our offices…Over the last 30 years, you have lived up to our trust, helping safeguard and building on Fleming’s legacy. I and all of us at Ian Fleming Publications Ltd thank you and hope you enjoy your celebration.”