The James Bond films are being re-released on the big screen in the UK to celebrate the 60th anniversary of the franchise. Select cinemas are scheduling each film, in order, with the latest adventure 'No Time To Die' set to make a return to cinemas on October 5th, which is 'James Bond Day.' Screenings have been in 4K digital at select Vue and Odeon Cinemas across the UK and Ireland and tickets can be booked on the following sites: Odeon, Vue and Cineworld. 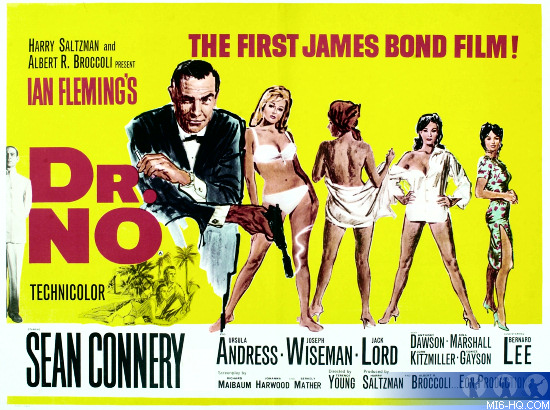 The fortunes of the Bond films vary week by week. Audiences came out in droves for Connery's 'Goldfinger', but dropped off considerably for the follow-up 'Thunderball'. Long ostracised before Daniel Craig's era, 'On Her Majesty's Secret Service' demonstrated its significance to the fan base by securing almost double the takings of 'Diamonds Are Forever' before it. British audiences flocked back for Roger Moore's debut outing 'Live And Let Die' and even more so for 'The Spy Who Loved Me', with even the critically derided 'The Man With The Golden Gun' out-performing two of Connery's films.  Each of Moore's films dropped after the super strong performance 'The Spy Who Loved Me' until 'A View To A Kill' surged back. Timothy Dalton landed impressive results for both his films, perhaps most surprising was 'Licence To Kill's strong showing. Pierce Brosnan burst back on the big screen with 'GoldenEye' and obliterated all before - doubling some of the other takings and smashing 'Goldfinger's record.  The rest of his tenure did not fair so well, with takings plummeting for 'Tomorrow Never Dies' and reaching rock bottom for 'Die Another Day'. The series reboot with 'Casino Royale' flipped the trajectory by earning the most of any film so far. It was challenged by 'Skyfall' that was played on more screens than any of the films on the weekend of HM Queen Elizabeth II's funeral when patriotic feelings were running high in the UK. Both 'Quantum of Solace' and 'SPECTRE' faired poorly, but the run was capped with a big take for on the 60th anniversary weekend when Bond was widely covered in the media.

Update: Skyfall jumped into the #2 spot with a huge haul, helped in part by having wider distribution than any of the other films (40 more screens than others) and patriotism running high in the country that weekend. The much unloved 'SPECTRE' was a predictable slump, but the run ended strong with 'No Time To Die' coming in at #3 as James Bond was all over the media as the screening coincided with the 60th-anniversary celebrations.

Update: Although 'Skyfall' took in the second-highest box office, it did so over more screens than any of the other films, so its average was lower. 'No Time To Die' returned to regular screenings and enjoyed a much higher average, jumping it into the #2 spot. 'SPECTRE' had the emptiest theatres of any of the Craig films, lower than the often derided 'The Man With The Golden Gun'.