Get the low down on the new official cocktail book - Shaken: Drinking with James Bond & Ian Fleming

Shaken: Drinking with James Bond & Ian Fleming, the official cocktail book, explores James Bond creator Ian Fleming's writings on the pleasures of drinking and offers 50 cocktail recipes created by the co-founders of award-winning bar Swift – Edmund Weil (who is related to Fleming), Bobby Hiddleston and Mia Johansson. Fergus Fleming has written a foreword. It has been created in close collaboration with the Ian Fleming Estate and Ian Fleming Publications.

From the very first 007 novel, Casino Royale, in which Bond christens The Vesper, to the immortal lines, ‘shaken and not stirred’, which first appeared in print in Diamonds Are Forever, strong, carefully crafted cocktails are an essential component of every Bond story. 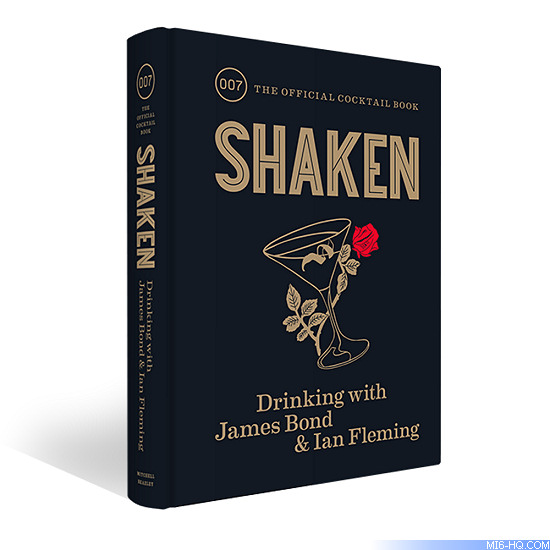 With ten classic drinks from the pages of the novels, plus forty brand-new recipes inspired by the people, places and plots of the original novels, Shaken offers both a dazzling selection of delicious cocktails and a glorious celebration of Fleming’s writing on a subject he was fascinated by.

Ian Fleming was born in London in 1908 and died in 1964. His first novel, Casino Royale, was published in 1953. It introduced James Bond, Agent 007, to the world and was an instant success. Fleming went on to write thirteen other Bond books, which spawned one of the most successful and well-known film franchises ever. The James Bond books have sold more than 60 million copies worldwide and have been translated into more than 20 languages.

In 2016 Edmund Weil and his wife Rosie Stimpson, the duo behind celebrated London speakeasies Nightjar and Oriole, teamed up with bar industry legends Bobby Hiddleston and Mia Johansson to open Bar Swift in Soho. It has achieved early renown, picking up the Time Out Best New Bar award in its first year.

Alison Starling at Octopus said of the announcement, ‘When Gordon Wise mentioned this idea at last year’s London Book Fair I jumped at the chance to acquire the book. It has been a huge privilege to work with the Ian Fleming Estate on this the first official James Bond cocktail book and bringing the award-winning team from Bar Swift into the mix has only added to the quality (and enjoyment) of the project.’

Georgia Grimond of the Fleming Estate commented, ‘Fleming was a stickler for well made and delicious things in life. Long before many others, he was writing in detail about how best to enjoy a good drink so it has been a delight to bring his writing, expertise and ingenious names to new audiences as well as those that know him and Bond well.’

Edmund Weil of Bar Swift commented, ‘Ian Fleming was a truly discerning drinker, as evidenced by the palpable relish with which he writes about food and drink in the Bond novels. Its been a pleasure and an honour to revive this enthusiasm in Shaken, through the contemporary lens of today’s burgeoning cocktail culture.’

Bond By The Numbers: Drinks

James Bond 101 Which Bond drinks the most and which films are the most alcoholic?