Marilyn Beck's Hollywood - Sunday 3rd December 1978
At age 51, Roger Moore is giving no thought to retirement, "though critics have been trying to get me to do just that for some time." He makes the statement with a shrug, offering it as one of many one-line, self-deprecating responses to questions about his life and career.

"I can take any star part and turn it into an insignificant role," he comments airily as he sits at an outdoor cafe along Canal Grande in Venice, Italy, waiting for his next call before the 'Moonraker' cameras. And a moment later he makes the declaration that his hardest work "has been getting rid of my first two wives." 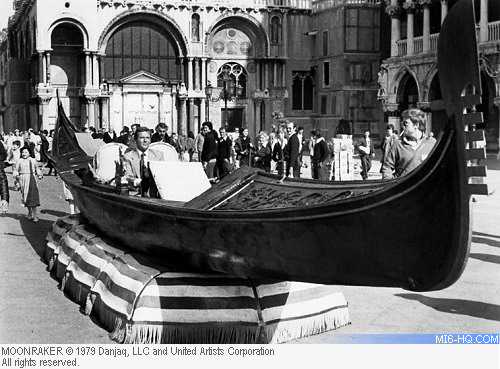 Never dropping his pose of a cavalier sophisticate, his face expressionless but for an occasional flash of the suave, wry smile that has become his trademark, everything he says has the ring of at least partial sincerity. After a flock of autograph-seeking children have come and gone, he makes note of the fact that none of them have referred to him as James Bond - though 'Moonraker' is the fourth Bond production he's made.

"Everyone knows Sean's the real James Bond," he says with lips curling upward ever so slightly. Though Sean Connery retired from 007 duty in 1971, Moore would have us believe "kids just think I'm his stand-in." He goes on to say, "I guess if you're not identified with a character, you're a failure." But then comments that he had no trouble achieving such identification when he was the star of five TV series. "There was 'The Saint,' and 'Ivanhoe' and 'Maverick.' And when I was in 'The Persuaders' people used to hail me as Lord Brett Sinclair. And when I was doing 'The Alaskans' - even though it was a flop - people called me Silkie Harris." 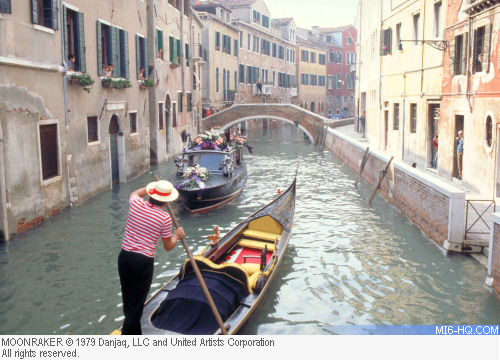 Later, after we change interview locations to a canal bank (where producer Cubby Broccoli is setting up a mock funeral procession shot), Moore offers the observation that his success has had a little to do with talent. "It's all luck," he insists. While apartment dwellers lean out of their windows to catch glimpses of Hollywood in Venice, he goes on to explain, "Look, I could be a one-legged beggar in Delhi, couldn't I? But I was lucky to have been born to British parents. Pride is a sin. I'm not guilty of that. My greatest defect is humility."

The son of a London "copper" who was raised in the South London suburb of Stockwell, Roger studied at the Royal Academy of Dramatic Art and worked in repertory before making his Hollywood film debut in 'Perfect Strangers' in 1945. And now, analyzing his career, he says with a nonchalant toss of one hand that the only reason he became an actor was "because I couldn't do anything else." 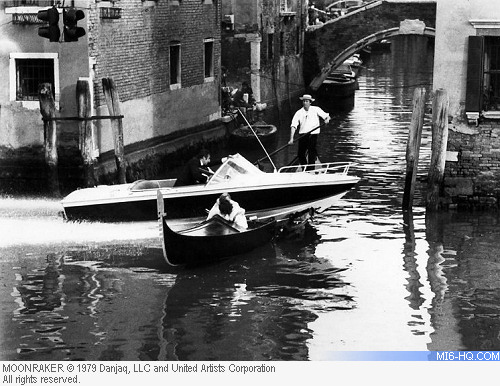 He's not thinking about where he'll be professionally after 'Moonraker' wraps early next year. He has no idea whether he'll be asked to reprise his Bond role in another 007 film, but insists he's not concerning himself with the issue. In fact, he states, "Nothing concerns me, except for my children. I feel I have to teach them moral guidance and steer them away from the influence of drugs and booze and violence. So far I'm pleased. They have their heads on straight."

He can't see where his Bond portrayals have taught any or all of his five offspring any harmful lessons about violence. Because, though Agent 007 may use pistols and bombs and all sorts of sophisticated explosive devices, "They are not violent in the sense of Peckinpah productions. There's no blood, no slow-motion shots of violence, of brains scattered in the streets. Occasionally someone gets in the way of a bullet or a knife, but it's PG violence. As Cubby Broccoli has said, 'It's sadism for the family.' Besides, I fight off evil. I'm Super-Batman." Which is the same sort of course at least one of his children wants to follow.

Roger comments that his five-year-old son Christian has decided that, after having first considered an eventual career as a pilot, he is now up in the air as to what he wants to be when he grows up. "'Well, I don't want to be an actor,'" Moore says his son declared. "'I want to be just like you, Daddy.'" 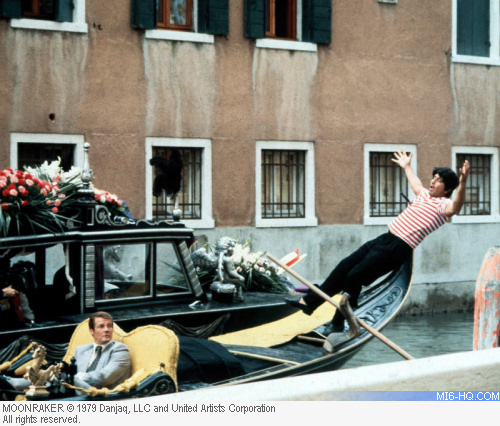 That bit of information provokes Moore into emitting a full-blown laugh - his first during the lengthy interview. A smile is still upon his face when he lifts a 'Moonraker' promotional lighter to rekindle his cigar and makes an observation. "You notice nothing on this lighter makes reference to me. They might bring back Sean Connery after all, but I'm not insecure. I got rid of all the mirrors in my house, for one thing."

Once again, one can't be sure if Moore is joking. Which seems to be just the impression he wants to convey.