The annual CinemaCon event is begin held in Las Vegas this week and it was MGM's turn today to showcase their slate of upcoming films to the exhibition industry (cinema owners) and give them sneak previews of forthcoming attractions. 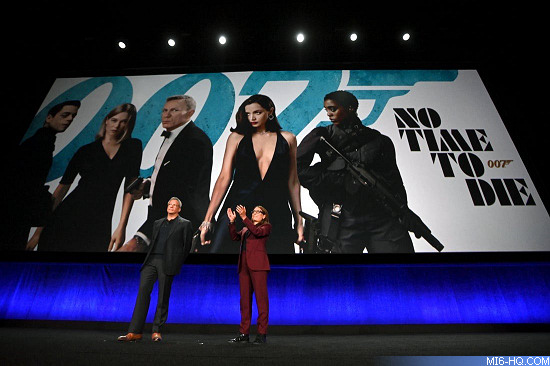 MGM Motion Picture Group chairman Michael De Luca told kicked things off by addressing the industry's situation. "Thank God for each and every one of you," he said to the crowd of cinema owners and managers. "There is no industry without all of you. There is no Hollywood without all of you. Every filmmaker has a movie theater waiting at the end of their dream, and you’ve all made that happen. It was important to us to release this movie so fans could watch James Bond as it's intended to be enjoyed - on the big screen," he said. "We're happy to say that that day is almost here." In a jibe at Warner Bros and Disney who have pivoted to streaming releases, MGM president Pamela Abdy added: "We held all of our movies for you."

After showing clips of other upcoming MGM movies, the presentation wrapped with a 9-minute clip from the pre-title sequence, and MGM reiterated that 'No Time To Die' would be released in cinemas in the USA on October 8th.

"We know it's been a long wait," De Luca said. "Trust us, we felt it too. But the wait is nearly over. Obviously, we're beyond thrilled to be joining with our friends and producers Michael G. Wilson and Barbara Broccoli, and our incredible director, Cary Fukunaga, all of whom value and worship the theatrical experience with everybody in this room. [We] are bringing Daniel Craig's final performance of James Bond to the theaters this fall. And we can't wait for audiences to see the remarkable way he's closing out his legacy with this film. This man leaves it all on the field. It's going to blow your mind." 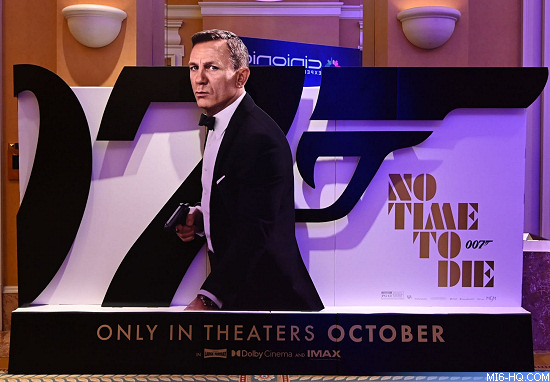 The clip starts midway through the pre-title sequence immediately after this explosive event. It is understandable that MGM removed this context as it would be a big spoiler as to the friction between Bond and Madeleine. However, the 9-minutes provided plenty of other spoilers which some movie sites have already posted articles about without warnings. Do not read below if you want to avoid details of the pre-title sequence that have not been included in the many trailers for the film.

(Sound is muffled at the start of the scene). Bond is on the ground, hurt. He wakes up and pulls his phone out of his jacket pocket. He starts running down the street and towards the bridge (from the trailer), chasing after a teenage boy. A car comes from behind up and tries to run him over, but Bond dodges it by taking cover behind a small rock before jumping off the bridge when a motorcycle arrives. (We see this scene in the trailer). When he lands below the bridge, he starts running through the city. He tackles the motorcyclist and fights him one-on-one, killing him. But before he dies, the motorcyclist reveals Madeleine is the "daughter of Spectre." Bond takes his bike and drives it through the city, culminating in his bike jump from the trailer. He leaves the bike and goes up to a hotel room, it seems. The bell attendant says something about Bond's wife. Bond sees Madeleine and says, "You're right. Letting go is hard." She responds, "James, what happened?" Bond says, angrily, "How did they know I was here? Spectre - how did they know?" A phone rings, but Bond doesn't answer. He and Madeleine leave, getting in their Aston Martin. "I have something I need to tell you," she says. Bond responds, "I bet there is." Bond drives throughout the city again, trying to escape. Madeline gets a phone call. "Pick it up," says Bond. Bond then answers the phone. The voice on the other end says, "Your father would be so proud of you. Your sacrifice [untinelligible]..." Shocked, Madeline tries to reassure Bond, "James, why would I betray you?" He says, "We all have our secrets. We just didn't get to yours yet." Bond releases mini spike-bombs from the back of the DB5 and takes out a car. "James, listen to me. I would rather die then..." - they get hit by a car and the camera focuses on ringing church bells. They're surrounded in an open square (from the trailer). While they're getting shot, Bond doesn't do anything. He just sits there. Madeline yells, "James, do something! Say something, James!" The enemy is using a big gun to try to get in the car, while Bond still does nothing. It seems he's processing Madeline's possible betrayal. He finally says "OK" and does a donut with the DB5 and shoots all of the enemies. They escape. End clip.

An alternative write up added some further details:

The footage begins as James wakes up. He’s in a tan suit, but he’s on the ground and a mess. Blood on his face, dirt everywhere, and he can’t quite hear, which the sound mix reflects as everything is muted. Confused, he tries to get his bearings and make a phone call to Madeleine (Léa Seydoux) but he can’t connect. So he starts running down the hill as the classic Bond music starts to pick up. James starts to run across a bridge and he sees a young, skinny kid with black hair in front of him. The kid turns around and smirks as a car that James can’t quite hear yet starts speeding towards him from behind. They’re also shooting and a bullet hits James in the shoulder, which alerts him to its presence. Before it can run him over, he hides behind a small rock (some of this has been in the trailers). He gets up to run the other way when a motorcycle shows up on the other side. Now he’s trapped. Car on one side, motorcycle on the other. So, as you’ve seen in the trailers, he grabs a wire from the side of the bridge and jumps off, swinging to the bottom and taking a big fall. He stands up, still a little disheveled and confused, and starts running again, only to be cut off by the motorcycle guy—who is young, very fashion-forward, and not your typical Bond villain. He looks more like a tourist at a nightclub. James decides to take things into his own hands and charges the cycle driver, knocking him back onto the ground. The camera follows behind James as he does this and stays with him as the battle ensues. It’s a gritty, dirty fight, captured with a handheld shot that continues until James finally bests the guy and puts him in a choke hold. “Safin sends his regards,” the guy says (at least, we think it was “Safin,” which is Rami Malek’s character, but it wasn’t 100% clear). “You know Madeline,” he continues, to James’ dismay. “She’s a daughter of...” and as the guy just starts to finish that sentence, the guy passes out. James also notices that, in the fight, the guy had a fake, electronic eye, which is now just laying on the ground. So James jumps on his motorcycle and speeds away. He’s at the bottom of the city but he’s going up. So it’s up one staircase, up a hill, then a funeral procession approaches, so he dips away from them and flies up a staircase, jumping into the air (another recognizable shot from the trailers). He ditches the bike to go into a hotel, where the doorman says “Your package is done, Mr. Bond, as your wife requested.” James shows up to the room, beaten, bloody, and dirty, to see Madeleine. “You’re right,” he says. “Letting go is hard.” She’s shocked to see him, not sure what he means, but he grabs and shakes her. “How did they know I was here?” he asks. She asks who and he says “Spectre.” She says she doesn’t know and didn’t do anything. So James takes her and rushes her downstairs where, we assume, the package is ready—that slick, silver Aston Martin from the trailers. “There’s something I need to tell you,” she says. “I bet there is,” James replies. The Aston Martin zips away from the hotel and instantly is being chased. First a motorcycle, then one car, then another car. As James whips left and right across the city, Madeleine’s phone rings. James tells her to answer it and, when she takes it out, the Spectre symbol is on it. She answers and a voice begins speaking. “It’s Blofeld, my love,” the voice says. “Your father would be so proud of you. Your sacrifice will be our glory.” James doesn’t know what to say but Madeleine swears she didn’t betray him. “We all have our secrets, we just didn’t get to yours yet,” he says. As this is happening a local sheep herder gets a phone call. He’s told to let his sheep out or he’ll be killed. And so he does let the sheep out, which just so happens to be right in James’ path. But this is James Bond. When he sees an approaching car, he unleashes a few little explosives onto the street, and when he sees the sheep, he rips a 180 degree turn as the bombs go off, blowing up the other car, and allowing him to speed away. Here, the James Bond theme music kicks in big time. James and Madeleine keep driving and she’s about to tell him something when they get smashed into by a truck, which stops the car dead its tracks. Now several cars and motorcycles surround them, and the drivers take out their guns and just start shooting the Aston Martin. Hundreds of bullets from all angles. Of course, the car is bulletproof, but Madeleine starts screaming. James, however, needs a second to think. He’s silent and still. Then, the fashionable guy who now has one eye (from the earlier fight) approaches the car with a bigger gun. He fires at the passenger side window over and over and over. Madeleine begs James to do something but he just sits there. Thinking. The huge shells keep cracking the glass. Madeleine screams. Finally, James acts. He flicks a switch and, in another trailer shot, the car’s headlights become machine guns. He does a 360 degree spin, blasting all the bad guys, while also letting off some smoke so they can make a clean getaway. The car drives out of the mess, into a more populated area, and skids into a parking spot... which is where the clip ended.