Legendary guitarist Johnny Marr, who was one of the founding members of The Smiths, has joined the team working on the 'No Time To Die' soundtrack under composer Hans Zimmer. Zimmer and Marr have collaborated before, on films such as 'Inception' and 'The Amazing Spider-Man', and the pair often tour together. MI6 understands that Marr will be key to a new arrangement of the famous James Bond theme. 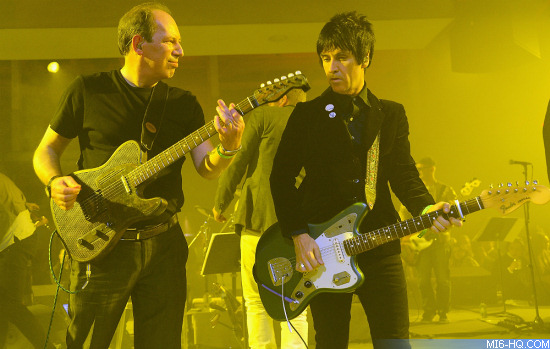 Speaking to NME, Marr said: "Part of the legacy of the Bond films is iconic music, so I’m very happy to be bringing my guitar to No Time To Die."

Zimmer was on a panel at the Television Critics Association this week and, when asked by reporters afterward if he had been working with Eilish, he said: "Yeah, we’ve become pretty good friends."  He also explained how he came to get the gig. "I mean, I never thought I would do this. I honestly never thought about it other than that Barbara Broccoli is a really dear friend. I just love her as a human being. We’ve hung out together at Tangiers and exotic places and I love Bond."

Meanwhile, Billie Eilish gave an interview to iHeart radio, founders of the ALTer EGO festival, where she kicked off the event with a 40-minute set in Los Angeles on Saturday. She confirmed that she was working with the film's composer on the track, which probably means that Zimmer will be weaving the title song into the main score too.

[Comments start at 1:50] "That was a while ago. It was literally something that me and my brother, who is my writing partner, we've tried to write a Bond song our whole lives... Every song that has been on the opening credits of those movies has always been fantastic.  Bond is so dope. It really is. It's the coolest movie franchise in the world, so it was a crazy call and a crazy past couple of months and.. working on it with Hans - oh my god - so amazing.  I'm very excited!