MGM is adopting a 'wait and see' policy on whether the latest James Bond film 'No Time To Die' will, in fact, make its oft-delayed release date in November.

On an investor conference call, MGM's COO Christopher Brearton told investors that they had three films due to be released in the remainder of 2020: 'Bill & Ted Face The Music' later this month (which will be a hybrid of select theatres and PVOD streaming), 'Candyman' distributed through Universal in October, and 'No Time To Die' which currently stands as a traditional theatrical release in November. "We continue to monitor and adjust the timing of our remaining 2020 slate," he said.

Many countries still have cinemas closed or their capacities severely reduced due to social distancing guidelines. How many of these will be open by November remains to be seen. In the USA, New York governor Andrew Cuomo this week declared that re-opening cinemas "wasn't worth the risk" and they would remain closed indefinitely. California recently rolled back their re-opening after infections rose.

Warner Bros' traditional release of 'Tenet' is the canary in the box-office coal mine as director Christopher Nolan has insisted on releasing in cinemas as soon as possible. Finally abandoning the idea of a day-and-date global release (which studios adopted to try and curb piracy), and going back to an old-fashioned staggered release in different territories, will eliminate any chance of large opening weekends, but it may give the film legs over several months.

MGM is keeping a close eye on 'Tenet,' as screens in November will likely be vacated just in time for a 007 roll-out.

"The theatrical marketplace is in flux. There’s great uncertainty about what the near term holds for access and attendance," added Brearton on the call. But with the US making little progress in reducing restrictions, and a public attitude shifting away from large gatherings, a decision to further delay is more likely than a shift to PVOD. MI6 understands that EON Productions is adamantly against any kind of PVOD release. A possible shift to Summer 2021 is still under consideration.

Adding to the financial challenges of releasing a blockbuster with reduced theatre capacity, Variety published a survey this week indicating that only a fraction of usual movie-goers would demand seeing new releases in a cinema at this time for 'No Time To Die'. Just 18% said they would only want to see 'No Time To Die' in theatres. 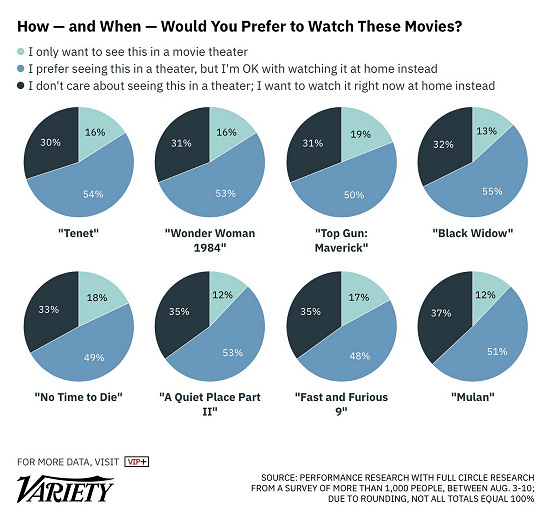 Back in March, MGM pulled the plug on the release of 'No Time To Die' with just 27 days to go before the world premiere. Heineken had just shipped Bond branded promotional materials to stores around the world that had to be destroyed the following day. Cinemas had been pre-selling tickets. Promotional partners had started shipping products, including an unfortunately timed batch of licensed popcorn. Books were pulled from distribution just in time.  Fans should take no solace in any announcements of promotional products and infer that 'No Time To Die' is nailed-on for release in November. Licensees will find out when everyone else does.

Today, MGM did not give any strong indications to investors that November was a for-sure thing. If Warner Bros is successful with their strategy on 'Tenet,' there is a chance November could hold. But the rug could get pulled at any moment.