Napoleon Bonaparte and the Duke of Wellington have well-earned places in the pantheon of military strategists. They are also instantly recognisable cultural icons. Immediately familiar, the French emperor is short, taciturn, extravagant in style and with soldiers’ lives, and a military genius. Arthur Wellesley, the Duke, was also a prickly character but was rangy and angular and it was his military strategy that was the primary factor in Napoleon’s final defeat. It was the hard-won victory at Waterloo that saved much of the world from another round of Napoleon’s megalomaniacal dictatorship and ensured Wellington’s hero status among Britons and beyond. 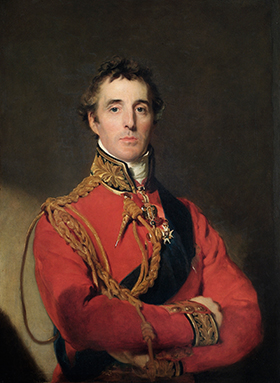 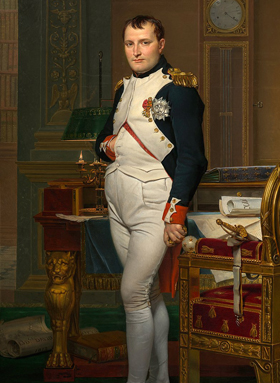 Above: Napoléon Bonaparte, Emperor of the French.

Facets of the struggle between Napoleon and Wellington play out across the spectrum of the Bond canon. The most obvious and frequent imagery being found within the personalities of the Bond villains. Almost every Bond novel and film has a main malevolent protagonist who possesses a Napoleonic-like desire to bend the world to their evil will. It has been speculated that Napoleon’s egomaniacal desire to dominant and conquer was partly due to his own inferiority complex which stemmed from his short stature. Fleming referenced this in 1959’s 'Goldfinger', noting “Napoleon had been short . . . . [and] it was the short men that caused all the trouble in the world.” Not all Bond villains are short, like the literary Goldfinger, but almost every one of them, male or female, possesses personal, physical, or emotional issues that have precipitated a disturbing sense of inferiority alongside a dangerous desire for domination. They all possess a Napoleon complex.

Such a trope pops up in the first Bond film: 'Dr. No'. After Dr. No explains to Bond his plans for revenge and extortion Bond responds, “World domination. The same old dream. Our asylums are full of people who think they're Napoleon.” Bond draws a clear and recognisable parallel between Dr. No and Napoleonic megalomania, but there is more to this ostensibly throw-away comment than the Napoleon analogy.  Prior to Bond’s comment we witness the British agent being led into Dr. No’s elegant dining room past Francisco Goya’s portrait of the Duke of Wellington. Bond actually does a double take as he passes the painting clearly signifying its importance to the audience. 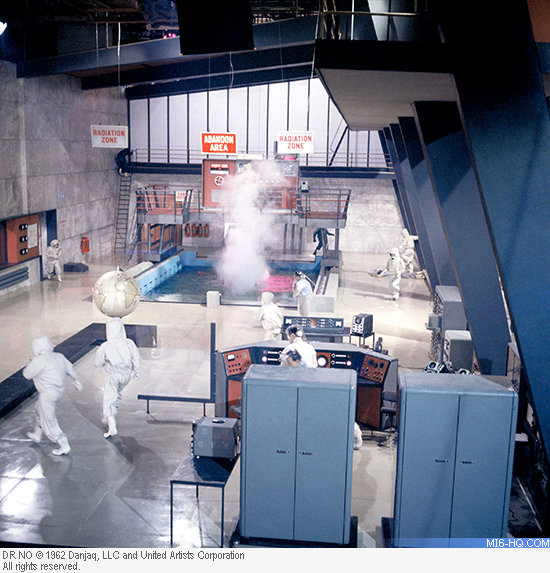 The portrait serves two functions. The first is a resonant nod to the 1962 cinema-goer for the painting had been much in the news. It had been stolen from London’s National Gallery in 1961 and was still missing during the movie’s initial release. It is therefore fitting that as a super villain, with a global reach, Dr. No would decorate his lair with such a purloined and prized portrait. It symbolizes his transnational power. Secondly, the portrait’s subject: Wellington. Wellington the conqueror of Napoleon is now “captured” by a villain who clearly possesses a Napoleonic complex along with the portrait. Dr. No has achieved what Napoleon failed to do. Bond’s subsequent defeat of Dr. No, therefore, elevates the British agent to heroic status, not quite a Wellington perhaps, but certainly a global saviour nevertheless. It’s a very relevant and familiar image and one that’s perfect for the debut movie. 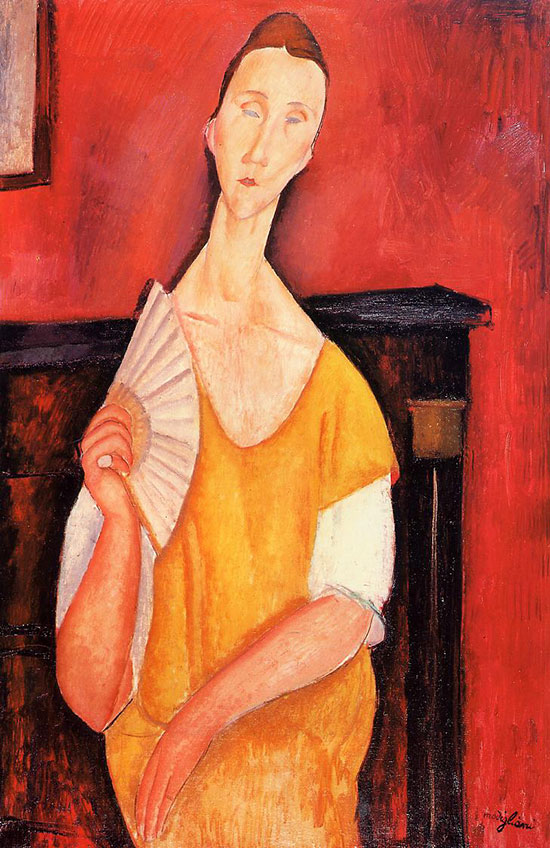 Above: Modigliani's Woman with a Fan has a cameo in 'Skyfall'

Interestingly, the stolen painting plot device was recycled for both 2012’s 'Skyfall' and 2015’s 'SPECTRE'.  Amedeo Modigliani’s Woman With a Fan, which was stolen from the Paris Museum of Modern Art in 2010, makes appearances in both movies as a very subtle linking plot device. In 'Skyfall' the painting makes an appearance in Shanghai and in 'SPECTRE' it graces the wall of a guestroom at Blofeld’s Moroccan lair.  Again, a portrait illustrates the transnational power of its owner. Blofeld, of course, had been immediately compared to Napoleon upon his introduction in 1961’s 'Thunderball' novel.

Fleming created many a villain in his literary cannon afflicted with Napoleon-like egoism, narcissism, and megalomania. Indeed, Fleming even used the name Buonaparte for his villain in his second novel, 1954’s 'Live And Let Die', Buonaparte Ignace Gallia (Mr. Big) Buonaparte is the Corsican version of Napoleon’s family name. In ‘Live and Let Die’ the parallel between historical and literary villain is, again, clear and extends beyond a shared name.  Fleming was never one to let a good name go to waste and he would subvert the Bonaparte as villain idiom when he used the name Napoleon for a gallant and heroic character. Fleming’s “Napoleon Solo” was a Bond-like agent for the 1960s ‘Man from U.N.C.L.E.’ television series. Incidentally, the last name “Solo” was recycled from the novel ‘Goldfinger’ where Fleming had bestowed it upon one of the mafia hoods who aid and abet the erstwhile supervillain.  The Bond film canon, was also never averse to recycling, would revisit imagery connected to Napoleon and the Iron Duke.

Napoleon makes his own portraiture appearance in 1985’s 'A View To A Kill'. Here, while attempting to search the office of the supposed villain, Max Zorin, Bond is confronted by Jacques-Louis David’s portrait of Napoleon.  The painting, proudly displayed on its own easel, is not prop clutter but perhaps designed to signal the idea that Zorin has Napoleonic pretensions. Zorin does indeed have plans for world domination albeit through economic means rather than military victory – all the while spilling a lot of blood.  Furthermore, Zorin’s French chateau is also symbolic of the former French emperor’s pretension and excess.  Incidentally, Bond’s home, too, is linked to Napoleon and Wellington for the literary Bond owns a two storey flat in Wellington Square, Chelsea.

It wasn’t too many years after Zorin’s demise at Bond’s hand that the echos of Napoleon and Wellington returned to the screen in 1987’s 'The Living Daylights'. Although a minor protagonist, villainous arms dealer Brad Whitaker possesses an obvious, even exaggerated, Napoleonic complex. So much so that Whitaker creates a life-like mannequin of himself dressed as the French general. But the allusion doesn’t end there. As Bond finally confronts Whitaker in the arms-dealer’s war-games room the British agent is forced to take cover behind a pedestal displaying a bust of the Duke of Wellington. Whitaker states “I should have known that you would take refuge behind that British vulture Wellington” and suggests that the real victors at Waterloo were Wellington’s Prussian allies. 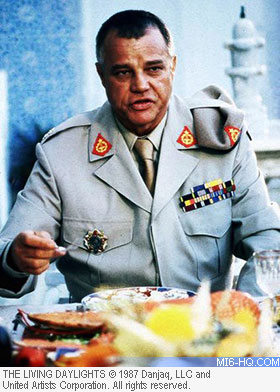 However, British honour is quickly restored when Bond sets off a minor explosion that topples Wellington’s bust onto Whitaker. Whitaker dies collapsing onto his own diorama of the Battle of Waterloo. In Whitaker’s death, we see yet another villain with Napoleonic pretensions defeated by Bond. This time the instrument of Whitaker’s death is actually the Duke of Wellington himself, or at least a marble simulacrum. When quizzed as to Whitaker’s whereabouts by his temporary KGB allies Bond quips that Whitaker “met his Waterloo.” 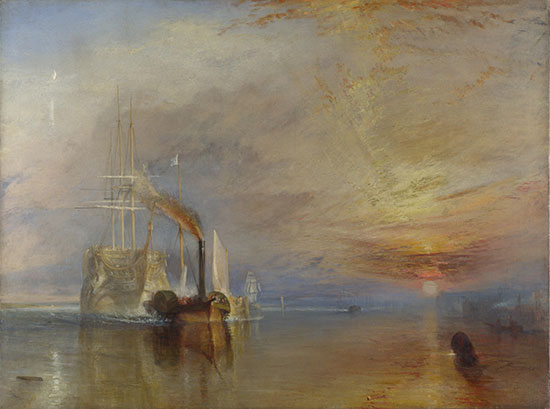 Fewer frivolous Bondian quips can be found in the Craig-era films but a darker time has called for a darker Bond; yet Wellington and Napoleon are still there. They are there, for example, in subtext of 2012’s 'Skyfall', one of the most successful Bond movies in the franchise’s history. This time there are no portraits of the generals or obvious analogies but they are present in a much more subtle and nuanced reference. Bond sits staring at J.M.W. Turner’s The Fighting Temeraire in London’s National Gallery’s room 34 as he waits for a meeting with the new “Q”. The HMS Temeraire played a distinguished role in the Battle of Trafalgar, one of the great naval engagements of the Napoleonic wars. Trafalgar broke the combined sea power of Napoleon and his then-Spanish ally. Turner’s painting shows the old, sail-powered warship being towed to the breaker’s yard by a steam tug. The painting’s intent is clear and obvious: a sense of loss, the inexorable passage of time, the onward momentum of technology. As “Q” notes to Bond “It always makes me feel a little melancholy. Grand old war ship, being ignominiously hauled away to scrap... The inevitability of time, don't you think? What do you see?” Bond quips back, “A bloody big ship.” Yet the parallel between Temeraire and Bond at this point in the movie is obvious.  Bond, of course, ultimately subverts the Temeraire parallel by proving he is not obsolete and destined for the scrap yard by, once again, vanquishing the megalomaniacal villain. Incidentally, Goya’s Wellington, returned to the National Gallery in 1965, is displayed in the Gallery’s room 39. 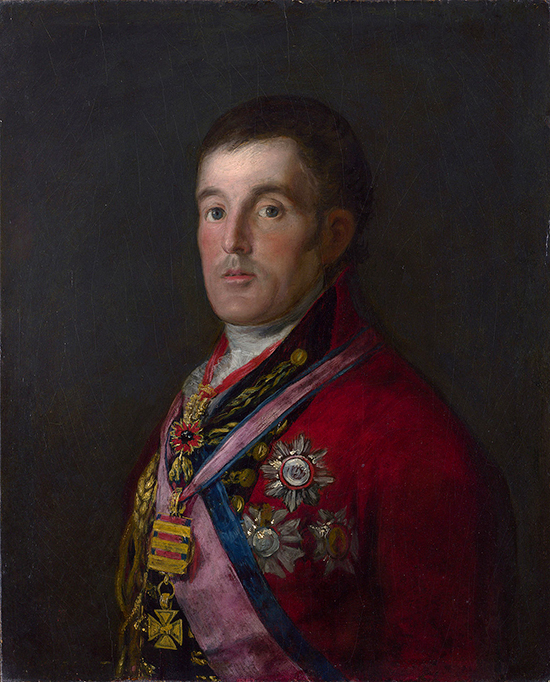 References to the Napoleonic wars pop up on two separate occasions in 1964’s novel, 'You Only Live Twice'. There is a passing reference to the French never again underestimating the British after Waterloo and a more important reference to the British hero of Trafalgar, Admiral Horatio Nelson. M, an admiral himself, pays the highest honour he can to Bond by noting that Bond “possessed what almost amounted to ‘The Nelson Touch’ in moments of the highest emergency.” High praise indeed for the taciturn old sea dog. The parallels that are drawn between Bond and Wellington or Nelson and, more obviously, the villain and Napoleon provide an accessible frame of reference for both literary and filmic Bond audiences. There is something comforting and explicable in drawing a villain with a Napoleonic complex and a establishing a hero as complex as Wellington. The creation of such types allows us to view grey, complicated, and nuanced problems though a lens that reduces issues to a simplistic struggle between good and evil. Although plotlines differ, we know that Bond and the villain will have experienced their own Waterloos before the final credits roll.