In the film adaptation of 'Goldfinger', Jill Masterson is introduced to the audience barely dressed in a black bra and panties, lying on a chaise lounge on the hotel balcony in Miami beach. How does James Bond's first encounter with Jill on screen compare to Ian Fleming's original novel?

Bond slid into the room. The girl was sitting on two cushions on top of a table which had been pulled up a yard inside the open balcony door. She had needed the cushions to give her height. It was at the top of the afternoon heat and she was naked except for a black brassiere and black silk briefs. She was swinging her legs in a bored fashion. She had just finished painting the nails on her left hand. Now she stretched the hand out in front of her to examine the effect. She brought the hand back close to her lips and blew on the nails. Her right hand reached sideways and put the brush back in the Revlon bottle on the table beside her. A few inches from her eyes were the eyepieces of a powerful-looking pair of binoculars supported on a tripod whose feet reached down between her sunburned legs to the floor. Jutting out from below the binoculars was a microphone from which wires led to a box about the size of a portable record player under the table. Other wires ran from the box to a gleaming indoor aerial on the sideboard against the wall. 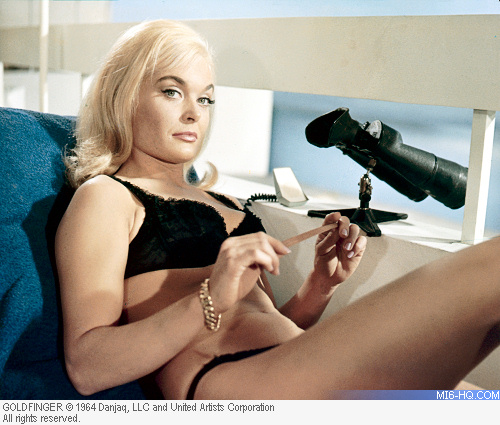 The briefs tightened as she leant forward again and put her eyes to the binoculars. 'Drew a queen and a king. Meld of queens. Can meld kings with a joker. Discarding seven.' She switched off the microphone.

While she was concentrating, Bond stepped swiftly across the floor until he was almost behind her. There was a chair. He stood on it, praying it wouldn't squeak. Now he had the height to get the whole scene in focus. He put his eye to the viewfinder. Yes, there it was, all in line, the girl's head, the edge of the binoculars, the microphone and, twenty yards below, the two men at the table with Mr Du Font's hand of cards held in front of him. Bond could distinguish the reds and the blacks. He pressed the button. 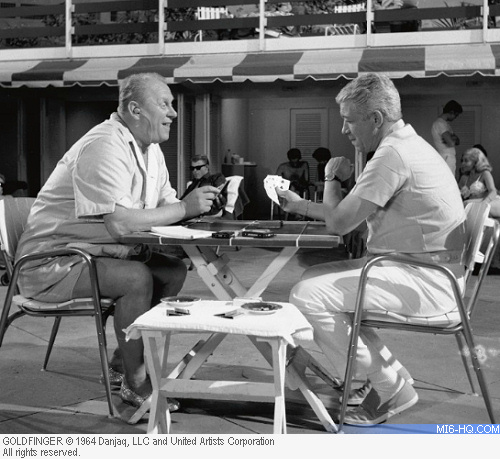 The sharp explosion of the bulb and the blinding flash of light forced a quick scream out of the girl. She swivelled round.

Bond stepped down off the chair. 'Good afternoon.'

'Whoryou? Whatyouwant?' The girl's hand was up to her mouth. Her eyes screamed at him. 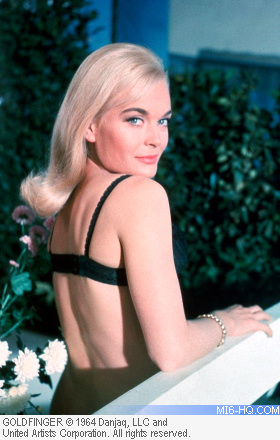 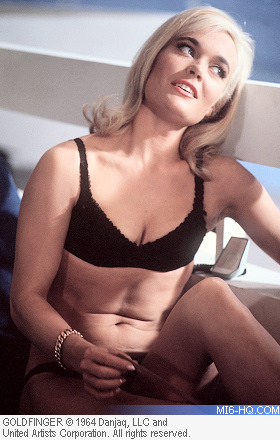 Bond put his camera carefully down on the chair and came and stood in the radius of her scent. She was very beautiful. She had the palest blonde hair. It fell heavily to her shoulders, unfashionably long. Her eyes were deep blue against a lightly sunburned skin and her mouth was bold and generous and would have a lovely smile.

She stood up and took her hand away from her mouth. She was tall, perhaps five feet ten, and her arms and legs looked firm as if she might be a swimmer. Her breasts thrust against the black silk of the brassiere. 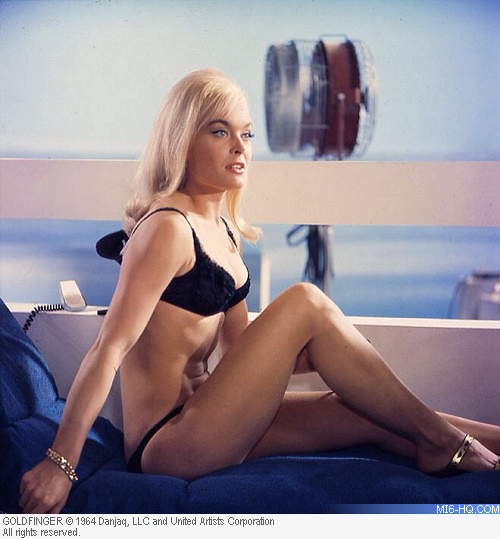 Some of the fear had gone out of her eyes. She said in a low voice, 'What are you going to do?'

'Nothing to you. I may tease Goldfinger a bit. Move over like a good girl and let me have a look.'