Filming of the 25th James Bond film was back in action in London today as the cast and crew appeared in West London on the banks of the River Thames.

Daniel Craig, Ralph Fiennes, and Rory Kinnear were in action in Hammersmith. Specifically, scenes were shot just outside the Rutland Arms on the lower mall adjacent to Hammersmith Bridge. Director Cary Fukunaga was on location in one of his trademark hats.

The official 007 Twitter account posted that today's shoot was scene 155, which places it at the end of the film and immediately after the scenes captured two weeks ago on the streets of Whitehall. Bond is seen approaching M and having a discussion outside.

Preparations for the Bond 25 location shoot started late on Thursday night when crew worked through the night, erecting security barriers and installing equipment on Hammersmith Bridge. Since April, only pedestrians and cyclists have been able to use the west London Thames crossing, due to critical faults in the structure. 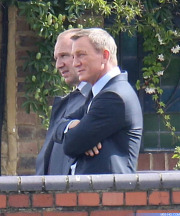 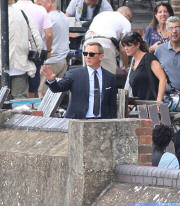