Matthew Field reports from the Bondstars event at Pinewood

After a three-year COVID-hiatus, Gareth Owen’s Bondstars’ was back in action on Sunday 14 August 2022 with another sold out event at Pinewood Studios. Themed around “60 Years of Bond” the day kicked off with a screening and celebration of Daniel Craig’s debut, 'Casino Royale' (2006) in the John Barry Theatre.

Director, Martin Campbell who was unable to attend due to filming commitments in Greece sent a message, “Sometimes when you shoot a movie you have no idea how it will turn out. On rare occasions you get very lucky – lightning strikes – and your movie turns out great. Such was the case on ‘Casino Royale’. However, luck I think, had very little to do with it. What we had was a terrific crew, all of whom contributed to making it a great success…I always believe making movies is a team effort. I may have been the director but the success of this movie belongs to the great team of people who worked on it and for that, I am forever grateful. I wish I could be with you and I hope you all enjoy the screening.”

The film was introduced by Executive Producer, Anthony Waye, “I was looking back at my dairies of 2004, 2005 and 2006, the dramas we had to get this film off the ground were unbelievable…we changed studios from Pinewood to Barrandov in Prague, we had to get a new Bond, halfway through preparation MGM Studios was sold and Sony took over and then another isolated incident, Hurricane Katrina hit New Orleans and that affected us in the Bahamas. Anyway, we made it and we had a lot of fun. Enjoy the film.” 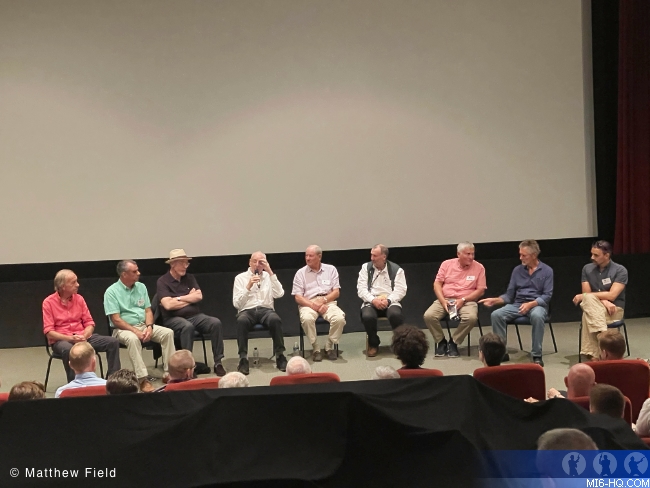 Méheux began by talking about the pre-title sequence, “We discussed how we should start it, different to other Bond films, in order to say, ‘This is now going back in time to before he actually becomes 007.’” Inspired by the camera angles and photography of the 1960s Harry Saltzman produced spy thriller, ‘The Ipcress File’ Méheux filmed the opening in black and white, “Some of my first films were in black and white. I have always liked the artistic element of [it].” Stuart Baird revealed the challenges involved in editing the lengthy poker games to maintain tension and also to allow audiences to follow the game play, “I had done a picture with Richard Donner called ‘Maverick’ (1994) which had a series of big poker games, so I said to Martin ‘I would do the same thing Dick did, you have to shoot the eyes, the whole game is the eyes.’ You just tighten [the card game scenes] and tighten them and tighten them and try to get the essence of the drama and lose all the rest of it.” 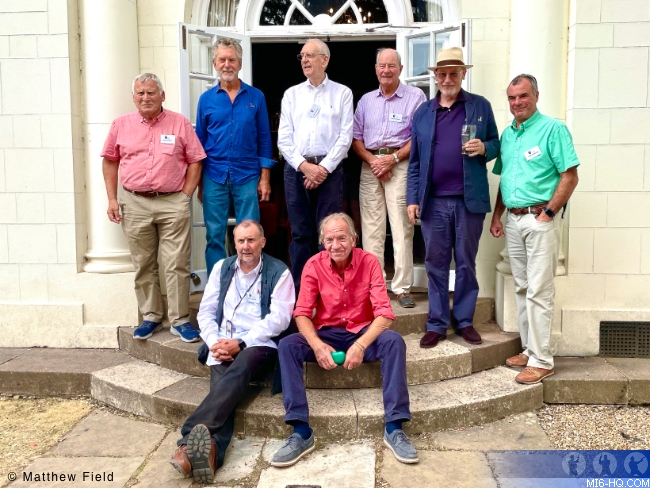 Chris Corbould’s crowning moment in ‘Casino Royale’ was the elaborate and sophisticated rig built to engineer the sinking house in Venice, “I had done sinking rooms before but what I hadn’t banked on was Peter Lamont, God bless his soul, had based it on the Hotel Danieli which is four storeys high.” He recalled the fun they had, “Barbara walked onto the set with all the Sony executives and said, ‘Wait until we are all up on the top floor and then hit the button.’ The first thing is this eruption of air bowls up from the water and then the thing starts tilting and begins sinking. Most of the execs thought it was funny but there was one in particular who was not impressed and vented off at me!”

Joseph Millson explained he first encountered the EON team when he played James Bond during various screentest sessions for the filmmakers. He was later offered the role of Carter, the field operative working opposite 007 in Madagascar. Millson revealed he was also approached to reprise his role in 'Quantum of Solace' but the character was lost in later drafts. 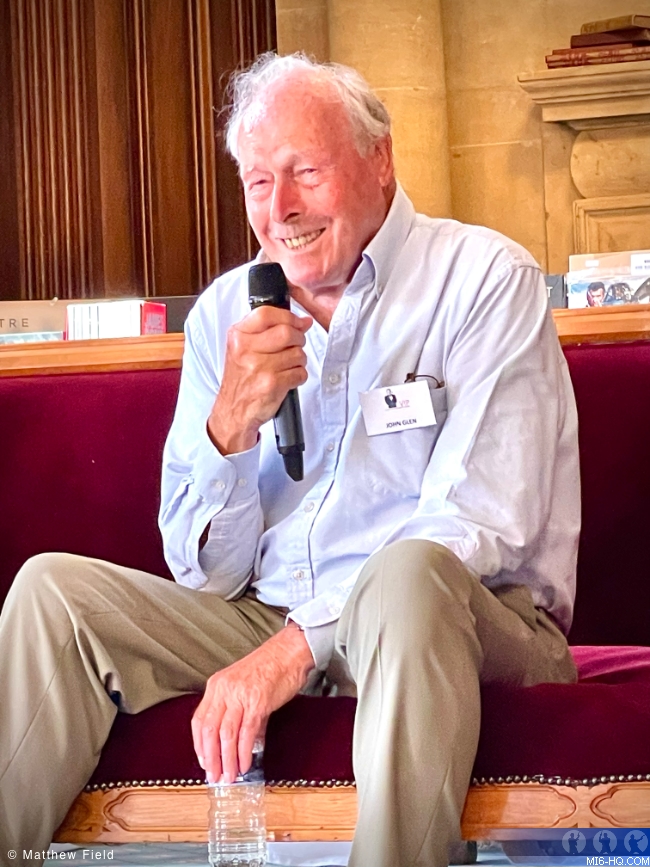 Bond expert Dave Worrall gave a fascinating talk on the history of James Bond’s association with Pinewood in the studio gardens which can be seen in 'From Russia With Love', 'Goldfinger' and 'The World Is Not Enough'. 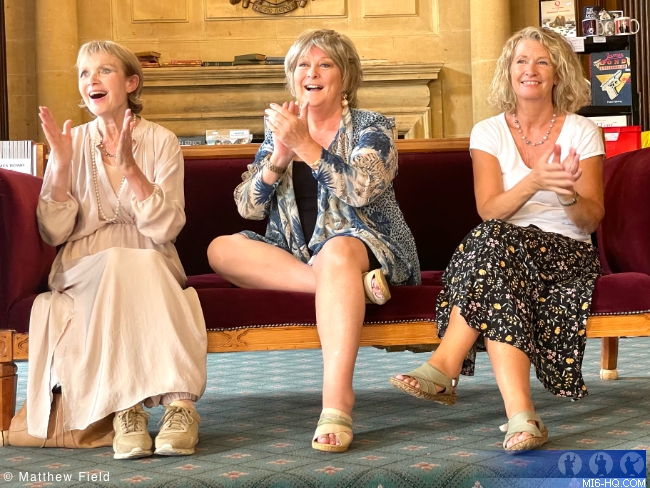 Further Q&A sessions took place following a barbeque lunch. First up the women were asked if they still, in 2022, subscribe to the term ‘Bond Girl’. Maddie Smith said, “I love being a Bond girl,” and declared the wokeness “a load of bollocks!” Hanley felt, “Just being part of the fandom is lovely but when the [classic] films were made it was a different world for women. I don’t care what [we] are called it was huge fun to be part of it.” Caroline Bliss responded, “Well I am not a Bond girl! I was Miss Moneypenny, I was secretary to M.” 98-year-old Elaine Schreyeck brought the house down when she quipped from her seat in the audience, “I must be oldest Bond girl here!”

‘For Your Eyes Only’s’ John Wyman and John Moreno took to the stage followed by John Glen, who when reminiscing about Pinewood, admitted some of the happiest days of his life were spent here. Owen quizzed the director on his last 007 movie, 'Licence To Kill' which had very much set the DNA for ‘Casino Royale’. “It was ahead of its time. Personally, I am very proud of it. The Daniel Craig films have been very successful and they are in the style of ‘Licence To Kill’ – hard edged. Perhaps not as much humour as one would have wished for but maybe there was too much humour in my films? 'Octopussy' was skating on the verge of slapstick at times.” 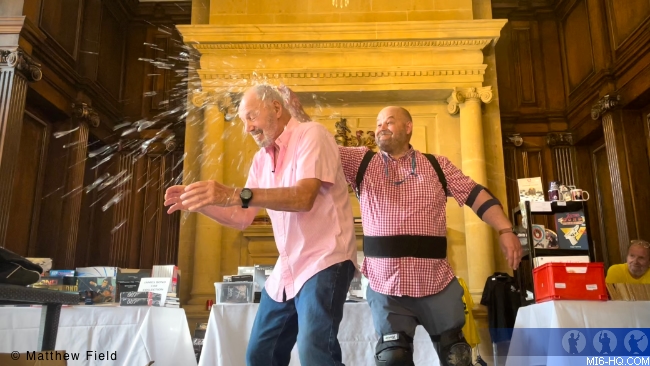 The surprise hit of the day was Paul Weston’s highly entertaining stunt demonstration in which he put Gareth Owen through his paces as a Bond contender. The athletic, 82-year-old Weston had the audience in fits of laughter as he co-ordinated a fight sequence allowing Owen to smash a sugar glass bottle over his head just like Princess Diana had famously done to The Prince of Wales on the set of 'The Living Daylights' here at Pinewood in 1986. 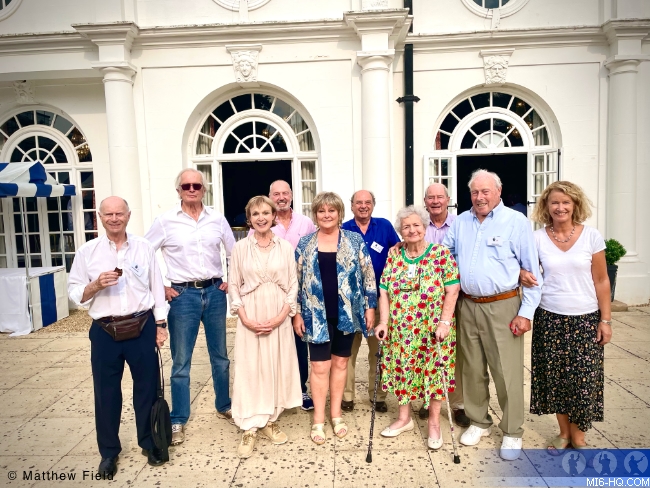 Following afternoon tea, the event drew to a close. It was fantastic to see Bond fans back together at 007’s spiritual home and by their reactions, it proved that when it comes to Bond events nobody does it better than Gareth Owen.