The day began with an exclusive screening of Sir Roger Moore’s memorial held at the studios in October 2017. This event was never broadcast and this screening was the first and only time an audience have had the privilege to view this private celebration. The memorial included speeches and tributes from Dame Joan Collins, Sir Michael Caine, David Walliams and Michael G.Wilson. 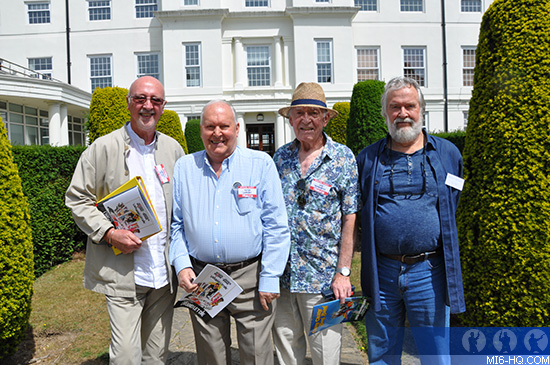 Special guests were on hand for signing and photographs. Peter Lamont autographed copies of his Live And Let Die Portfolio – a 100 page special magazine published by MI6, detailing his work on the movie and showcasing many of his own personal documents and photographs. Bond director John Glen also joined later in the day to sign copies of his autobiography 'For My Eyes Only'.

Following a tour of the Pinewood gardens by 'The Essential Bond' author Dave Worrall, Gareth Owen hosted a Q&A session. Madeline Smith recalled her scene in which James Bond undresses Miss Caruso with his magnetic watch: “I thought there was one person under my legs but there were apparently two or three.” To Maddie’s delight a shout from the crowd revealed one of them - Ian Wingrove - was in the audience! “Roger brought in the cassette with the demo music for 'Live And Let Die' for us all to listen to. He said ‘Isn’t this wonderful, this is going to be a great big hit,’ which of course it was.” Gloria Hendry discussed how she trail-blazed as the first official black James Bond girl: “I didn’t know anything about Bond films,” she revealed when first meeting producer Harry Saltzman.

Brian Smithies recalled working on the poppy field explosion at the end of the movie - a model built by special effects guru Derek Meddings and shot by over-cranking the film to slow down the action. “We were sitting in rushes with Cubby Broccoli and Guy Hamilton and they looked at the footage and said ‘That doesn’t work.’ Cubby and Guy said ‘Shoot it again.’ Derek Meddings said ‘That was fine, nothing wrong with that.’ He disappeared down to the cutting rooms, cut off the lead up so he only had the film that was needed and got the sound crew to put some bangs on it. We showed the same but of the film in rushes the next day and Cubby and Guy came out and looked at each other and said ‘Now, that’s movie making!’ 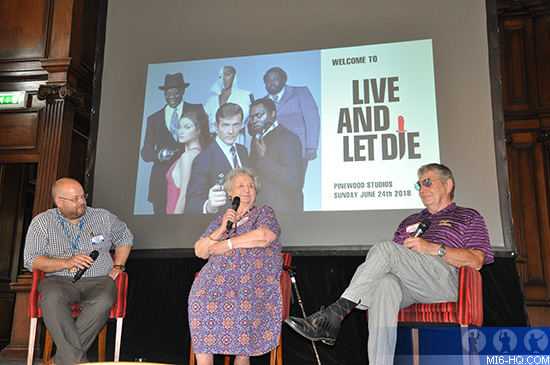 Ian Wingrove recalled working in Jamaica and New Orleans preparing the many vehicles for the film. In Montego Bay the SFX team restored the police car chasing Bond’s double-decker London Routemaster bus once they had retrieved it from the swamp. Later they used it for their own transportation around the island; “The colour of the police car perfectly matched the local police force’s car in Montego Bay. The police there thought it was a hoot because we used to drive through Montego Bay with the sirens going!” Wingrove also recalled the reaction from the locals, who starred open-mouthed as he delivered the speedboat mangled amongst Sherriff Pepper’s car to location on the back of a low-loader in New Orleans, “It was hilarious, we nearly brought New Orleans to a stop!” 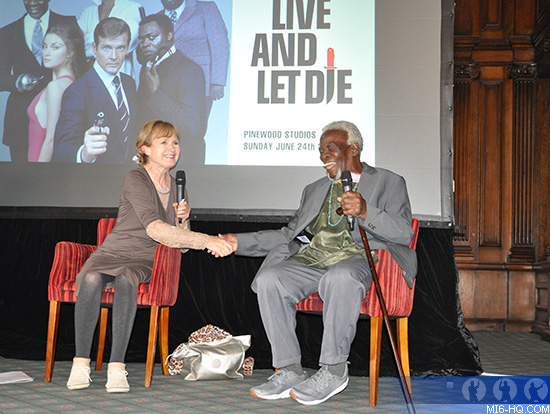 Elaine Schreyeck remembered: “I nearly didn’t do 'Live And Let Die'. I was reading the script sitting in my garden and I suddenly said to my mother ‘I can’t do this film! I don’t like snakes!” Later she remembered been equally petrified when working on Ross Kananga’s crocodile farm.

Stuntman Vic Armstrong discussed doubling Roger Moore during the climatic fight between Bond and Mr. Big in the underground caves. “It was an amazing learning curve. This was my third Bond following 'You Only Live Twice' and 'On Her Majesty's Secret Service'. I got to work with an incredible stunt coordinator, Bob Simmons and my future father in law George Leech. Bob rehearsed the fight in this shark pen with me, breaking down a fight, where the actors were going to go, where the edits were going to come, how we do the actual stunt. It was invaluable and it was lessons I learned on [Live And Let Die] I used for the rest of my career.” Armstrong was injured in rehearsals, falling and landing on his heels on the hard cement floor. “I went home and crawled up the stairs on my hands and knees. The next day we did it again and I landed like butterfly…with sore feet!”

Star of the show was Louis St Juste who entertained the audience with tales of filming the pre-title and the finale voodoo village scenes at Pinewood Studios. 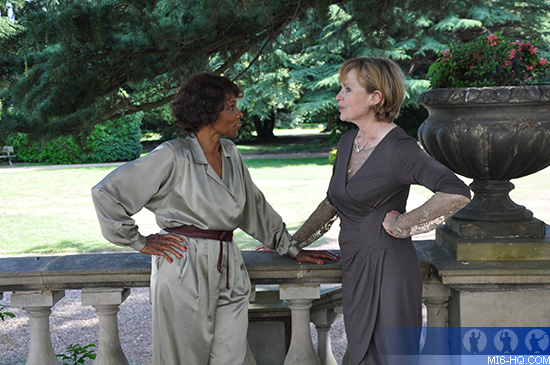 The day culminated with a 4K projection of 'Live And Let Die' in the comfy John Barry Theatre. The screening was introduced by Lamont who recalled that originally the filmmakers wanted to include a water carnival of women during the boat chase which was to have come crashing down as James Bond roars through the middle of it.  The scene was to have cut to a golf course near by where a gentleman is about to make a two-inch put, as a boat comes crashing into a sand bunker. The golfer was to have been played by golfing ace and Live And Let Die’s cinematographer, Ted Moore.

Another enjoyable and memorable event from Bondstars who will return later in the year with a 50th anniversary celebration of Albert R. Broccoli’s 'Chitty Chitty Bang Bang'.

Events The BondStars.com summer barbecue event of 2009 will be a celebration of the life of film producer Albert R. "Cubby" Broccoli