The Shorts: Quantum of Solace

In the Bond movie canon, 2008’s "Quantum of Solace" is a bit of mixed bag. After the massive success of "Casino Royale," the filmmakers and writers faced many difficulties trying to top themselves, and the 2007-2008 Writers Guild of America strike certainly didn’t help. Filming commenced with an unfinished script that had its holes filled in by director Marc Forester and, believe it or not, Daniel Craig himself. In case you were wondering how Craig felt about this task, this quote from a recent interview should suffice "…a writer I am not." 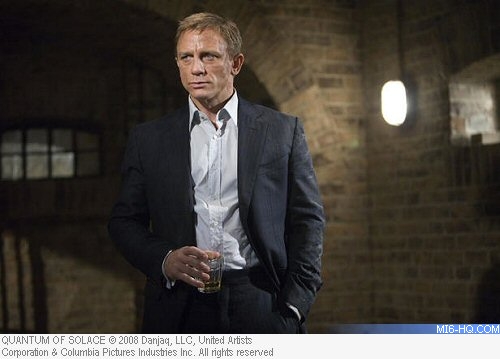 The film itself as a whole generally tends to bring out three things in 007 fans: love, hate, or ambivalence. While my opinion leans more towards the latter, the trailer, like the film itself, is hard to pin down. It begins with the film’s most focused moment, the interrogation of Mr. White. The audience is initially drawn into the highly atmospheric and charged scene with White’s sinister intonation of "The first thing you should know about us is that we have people everywhere." This snippet of the trailer really works not only because it tells the audience you’re watching a continuation of "Casino Royale," but how steeped in the style of Ian Fleming it is.

Not even Q’s gadgets could have helped 007 out of what happens next to this trailer. That’s the thing. Nothing happened to it. After some heated dialogue between M. and Bond, it becomes a regular trailer with the panache and feel of a proper 007 film strangely missing. Don’t get me wrong, there is a lot of impressive high octane action, and the 007 logo and music are used very effectively. The choral version of the theme music is very much a stand out, and was used to greater effect on last year’s 50th anniversary Blu-Ray trailer.

Ultimately, it almost feels as if we are watching a "best-of" montage of a really well made and executed thriller. But, compared to what has come before it, an important element is missing: James Bond. Not just James Bond, but the heart and soul of a true 007 adventure. In the end, it takes the image of Bond stoically rising up from a barren desert mound, machine gun in hand, to remind us that we are in a proper 007 world.

When all is said and done, and the ultimate best and worst list of Bond films is made, "Quantum of Solace" will most likely fall squarely in the middle. The trailer, as with the film itself, leaves you wanting more. But, within a 50- year franchise such as this, there’s always going to be high-highs and low-lows. However, the trials and tribulations the production team went through here were well worth it as they learned from their mistakes. Think of "Quantum of Solace" as a pre-dinner cocktail and "Skyfall" as the delicious main course.