When Roger Moore completed his contract for four films ('Live And Let Die' through 'Moonraker') he negotiated each subsequent outing on a film-by-film basis with producer Cubby Broccoli. Part brinkmanship and part covering his bases in case he couldn't lure Moore back for a fee that wouldn't break the budget, Broccoli did screentest possible alternatives.

One such backup plan was American actor James Brolin, who did extensive screentests for 'Octopussy'. These can be seen on the film's DVD and Bluray special features. Had Moore not signed on for his sixth film, Brolin was to get the nod. All this despite Broccoli saying on multiple occasions that Bond should be played by someone British. 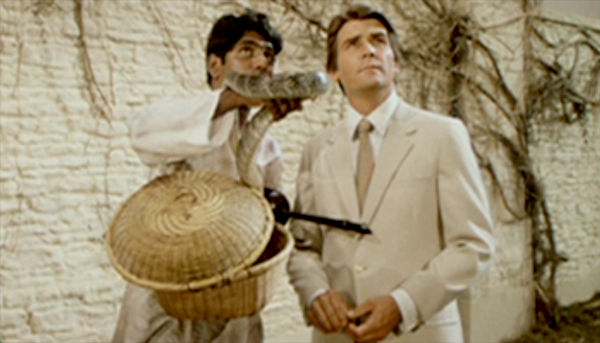 Speaking to the Daily Express, Brolin recalled: "I literally left Cubby Broccoli in London, came home to get all my stuff to live in England for a year, when Roger Moore said, “Oh I’ll do one more!” Asked if he was disappointed to be dropped after being cast as the first American Bond, he replied: “Yeah! I really was up for that.”

“When I heard I was going to go over and meet with him, I dressed to the hill. I spent more money on clothes than I ever thought I would, all at the wrong places. But I looked good! I showed up there and I did two screen tests, which I think are both available on YouTube now. Anyway, good or bad I got the job and Cubby took me to his clubs and I thought, ‘This is the life here in London!’ Just that was terrific whether I got it or not. This business is a crapshoot and a bit of luck anyway, so...”

Brolin's experience is a stark contrast to New Zealander Sam Neill, who also screentested, but five years later for 1987's 'The Living Daylights' when Roger Moore was definitely not returning.  According to a new interview with CinemaBlend, Neill only attended the screentest under "extreme reluctance."

He explained: "I think that was the last thing I allowed my then agent to bully me into. Because I said to her, ‘Listen, I do not want to be James Bond. And I particularly don’t want to be that James Bond that everybody says, ‘Look, there’s James Bond in the corner of the restaurant. He’s the one I don’t like.’ So I turn up to Pinewood, I do this audition, the entire thing was mortifying, and luckily I never heard from them again."

Cubby Broccoli turned Neill down. Timothy Dalton got the gig after Broccoli was not willing to share Pierce Brosnan with NBC for the last-minute renewal of 'Remington Steele.'

Neill was happy that Brosnan finally got to be 007 when the casting came around again in 1994: "Whereas Pierce who’s a friend of mine, really really wanted to be James Bond; and I’m so pleased he got the gig. … Pierce really wanted the gig, and he was really good at it. He was terrific. I didn’t want the gig, and I would have been any good. So all’s well that ends well."