Down To The Wire

No Time To Die's planned release is just 50 days away

There are 50 days to go until the UK release of 'No Time To Die' if the September 30th release date holds, and there have been several events this week that would seem to give hope to MGM and Universal holding course despite the box-office and pandemic headwinds.

Two of the UK's leading cinema chains (Odeon, Cineworld) launched preview landing pages for ticket buyers this week, and both brandished a spoiler about Nomi's character. Although this is somewhat well known within fandom, it has not been widely publicized outside of foreign language trailers. In fact, EON has gone out of its way to obfuscate it in recently published tie-in books.

Over in Japan, pre-sales of tickets started today with a special limited edition 7-card pack complete with a themed cardholder from luggage licensee Globe Trotter. The set is limited to 777 units and each sells for ~$250 through a lottery system. The film is scheduled to open in Japan on October 1st, a week earlier than originally announced. 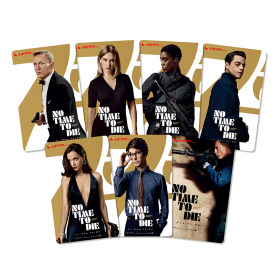 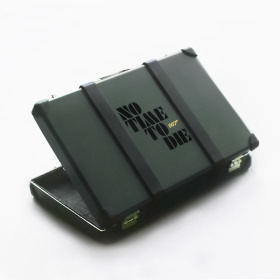 A new synopsis for the film has also been confirmed with a slight expansion on Nomi's character:

James Bond (Daniel Craig) has left active service and is enjoying a tranquil life in Jamaica. His peace is short-lived when his old friend Felix Leiter (Jeffrey Wright) from the CIA turns up asking for help, and M (Ralph Fiennes) also looks to bring 007 back for a new mission. When Bond encounters a new 00 named Nomi (Lashana Lynch), who has replaced him as the top agent, he learns she isn't impressed by his past achievements. The mission, which is to rescue a kidnapped scientist, turns out to be far more treacherous than expected, leading Bond onto the trail of a mysterious villain named Safin (Rami Malek), who is armed with dangerous new technology.

In addition to the new US TV spot that was released in late July, a TV spot was aired by the CBC during the Olympic closing ceremony at the weekend, although this was not the new 'Nomi and Paloma' 30-second spot that the Canadian ratings board approved earlier this month. A new 30-second 'Trailer 3' was also approved in Germany. Hopes were high of a new 60-second trailer being attached to the release of 'The Suicide Squad' as the BBFC in the UK had approved a new minute-long trailer for 'No Time To Die', but this failed to emerge. It has now been removed from the BBFC's listing for the film.

Elsewhere in certification news, the MPAA in the USA has rated 'No Time To Die' PG-13 for "sequences of violence and action, some disturbing images, brief strong language, and some suggestive material."

Perhaps the biggest sign that plans are going ahead was a listing published today for the 'No Time To Die' premiere by a concierge service for Tuesday 28th September at the Royal Albert Hall with the afterparty at the Natural History Museum. The RAH is hosting 'Harry Potter In Concert' from the 24th to 26th, so the large silver screen will be in place for Bond and the venue has no other event listed in their calendar until the 29th.

"Looking at our present situation as a banker, I'd have to say that the numbers are not on your side."

Following our article last week that analyzed the box-office potential for 'No Time To Die' in the current economic climate, the latest US theatrical data has given further doubt as to whether the film can make a profit if the planned release goes ahead. To recap, 'No Time To Die' needs to make approximately $928m at the global box office to break even.

Since then, Disney's 'Jungle Cruise' underperformed in its debut weekend only making $35m, and suffered a 55% drop in its second weekend. Despite rave reviews, WB's 'The Suicide Squad' opened to a disappointing $26m this week, missing industry estimates of $35m. Marvel's 'Black Widow' dropped another 40% between week 3 and 4 and has only earned $174m in North America with a global haul of just $360m after a month on release.

None of this bodes well for Bond. Even if 'No Time To Die' can land an unprecedented $90m opening weekend in the US in 2021, that will not be enough to sustain the damage of large audience drop-offs in subsequent weeks.

Further complicating the box-office prospects is the news that 'No Time To Die' has no scheduled release in China, the world's biggest cinema market. None of the big recent films - 'Black Widow,' 'The Suicide Squad,' Jungle Cruise,' and 'Space Jam' - have launched in China. In fact, there are no live-action Hollywood films currently scheduled for release in China in 2021. The last Hollywood tentpole to open in the country was Universal's 'F9' which scooped $203m, outperforming the US where it only earned $171m. As MI6 previously reported, studios only get to keep 25% of revenues from China, so 'F9' only saw $50m from its Chinese box office. 'SPECTRE' took $83m at the Chinese box-office back in 2015 (approximately 10% of its global take) and with no release currently scheduled, that is another huge chunk of revenue missing from the fortunes of 'No Time To Die'.

If current cinema attendance trends continue, 'No Time To Die' will be the first James Bond film to lose money during its theatrical release.

Before 'No Time To Die' however, MGM will open their $55m Oscar-bait biopic of Aretha Franklin 'Respect' as a wide release on over 3,000 screens in the US this weekend. Industry projections have 'Respect' earning around $10m on opening weekend. If it fails to live up to that conservative number, MGM may be looking at another loss.