James Bond Jr ran for 65 episodes, each approximately 25 minutes in length, and first aired on US television on 16th September 1991.

The show follows the adventures of a youthful James Bond Jr (nephew of 007) and his friends as they simultaneously study at Warfield Academy on the south coast of England and tangle with well-known Bond villains.

Produced by Murakami Wolf Swenson, Danjaq and United Artists in cooperation with RLR Associates, the show was created for syndication aimed at children's morning television. As such, apart from the first episode that sets up the characters and back story, each adventure is stand-alone and can be viewed in any order. 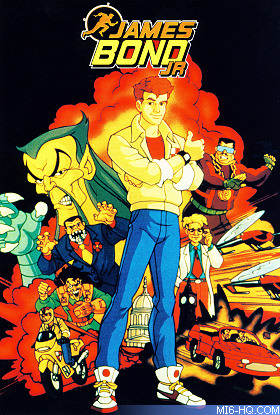 UK Video Releases
The Beginning (The Beginning, A Race Against Disaster, Red Star One)
A Worm in the Apple (A Worm in the Apple, Dance of the Toreadors, No Such Loch)
James Bond Jr versus Jaws the Metallic Munch (Plunder Down Under, Ship of Terror, Invaders from S.C.U.M.)
The Eiffel Missile (The Eiffel Missile)
The Biggest Ever Saturday Morning Heroes (The Inhuman Race, It's All in the Timing)
The Biggest Ever Saturday Morning Picture Show (The Chameleon)