Bond: I promise I won't steal your shells.
Honey: I promise you you won't, either. Stay where you are!
Bond: I can assure you, my intentions are strictly honourable.

Bond: Those samples Strangways found were radioactive. Professor Dent told me they were worthless iron ore. He's either a bad Professor...
Leiter: Or a bad liar.

Bond: Your name Quarrel?
Quarrel: Maybe.
Bond: I am a friend of Commander Strangways.
Quarrel: I like people who are friends of people.

Dr. No: Unfortunately I misjudged you. You are just a stupid policeman whose luck has run out.

Leiter: Hey Quarrel, if you see a dragon, you get in first and breath on him. With all that rum in you, he'll die happy.

Bond: Looks like you're out to get me.
Sylvia: It's an idea at that.

Dr. No: SPECTRE. Special Executive for Counterintelligence, Revenge and Extortion. The four great cornerstones of power, headed by the greatest brains in the world.
Bond: Correction, criminal brains.
Dr. No: The successful criminal brain is always superior. It has to be.

Bond: I have to leave immediately.
Sylvia: [Kissing Bond] When did you say you had to leave.
Bond: Immediately.. well, almost immediately.

Bond:  Who are you working for?
Dent: I might as well tell you, as you wont live long enough to use that information... [He tries to shoot Bond but his gun is empty]
Bond: That's a Smith and Western and you've had your six...

Miss Taro: What should I say to a suggestion from a strange gentleman.
Bond: You should say yes.
Miss Taro: I should say maybe.

M: Yes, I thought so, this damn Beretta. I've told you about this before. You tell him...
Armourer: Nice and light, in a ladies handbag. No stopping power.

Bond: [Of Taro] Book her superintendent, and, ugh, be careful of her nail varnish.

Sister Rose: Come in... you poor dears. We simply didn't know when to expect you. First it was teatime yesterday, and then dinner. It was only half an hour ago we knew you were on your way.

Miss Taro: I'll just go and put some clothes on.
Bond: Don't go to any trouble on my account.

Bond: [To the taxi driver, with the Walther in his back] Both hands on the wheel, Mr. Jones, I'm a very nervous passenger.

Leiter: Where did you get that suit?
Bond: My tailor, in Saville Row.
Leiter: Mine's from Washington, Felix Leiter: Central Intelligence Agency.

Quarrel: If that ain't a dragon, what is it?
Bond: A dragon that runs on diesel. Forget the spooks, Quarrel. You take the driver. I'll take the headlights and tyres.

Dr. No: I only gratify your curiosity because you're the one man capable of appreciating what I've done and keeping it to himself.

Quarrel: [To Bond] Ain't no use you struggling, Puss-Feller wrestles alligators.

Dr. No: A unique feat of engineering, if I may say so. I designed it myself. The glass is convex, ten inches thick, which accounts for the magnifying effect.
Bond: Minnows pretending they're whales. Just like you on this island, Dr No.

Honey: [Describing the "dragon"] He had two glaring eyes, a short tail and pointed wings.

Bond: World domination. That same old dream. Our asylums are full of people who think they're Napoleon... or God.

Bond: You went to school somewhere?
Honey: I didn't need to. We had an encyclopedia. I started at A when I was eight, and now I've reached T. I bet I know a lot more things than you do.

Bond: One takes cyanide, the other will have her arm broken, neither talks. What kind of person puts that kind of fear into someone?

Silvia: Too bad you have to go. Just as things were getting interesting.
Bond: Tell me, do you play any other games. Other than chem de fer?
Silvia: Golf... amongst other things.

Strangways: My managing director is a man of habit. He has a call put through to me around this time every day.

Bond: You believe in living dangerously, I can see that.
Miss Taro: [Suspiciously] Why?
Bond: With that wet hair you'll catch pneumonia.

Bond: Well, let's have some breakfast.
Honey: How can you eat at a time like this?
Bond: I'm hungry. We don't know when we'll get the chance to eat again.

Quarrel: Well if it ain't my friend who gets faces mixed up.

Bond: Your disregard for human life means you must be working for the East.
Dr. No: East, West - just points of the compass, each as stupid as the other.

Honey: What are you doing here? Looking for shells?
Bond: No, I'm just looking.

Quarrel: I get my directions from my ears, my nose, my instincts...

Armourer: Walther PPK. 7.65mm with a delivery like a brick through a plate-glass window.

Bond: You believe in living dangerously, I can see that.

M: A double-oh number means you're licenced to kill, not get killed.

Honey: My father was a marine zoologist. We came to the Caribbean for him to study seashells. One day he came to Crab Key... and I never saw him again.

Bond: [referring to Strangways] Where did you take him?
Quarrel: See that captain, that there's the Caribbean, that's where. Fishing.

Taxi driver: Where would you like to go to first?
Bond: Government house, but I'm not in a hurry... just take me for a ride.

Dent: Curious old Strangways disappearing.. or is it? That secretary of his was very pretty, very pretty indeed.

Bond: Drop it Professor, hands behind you. I thought you'd be along sooner or later.

[Surveying their surroundings]
Honey: It's a prison, then.
Bond: Mink-lined with first-class service.

Bond: So tell me, does the toppling of American missiles really compensate for having no hands?

Bond: I think they were on their way to a funeral.

Quarrel: We don't get nothing out of this girl, you want me to break her arm?

M: Oh, Miss Moneypenny, forget the usually repartee, 007 is in a hurry.

Waiter: One medium-dry vodka martini, mixed like you said, Sir, not stirred...

Bond: [referring to the dead taxi driver] Sergeant, make sure he doesn't get away.

Dr. No: One million dollars, Mr. Bond. You were wondering what it cost. 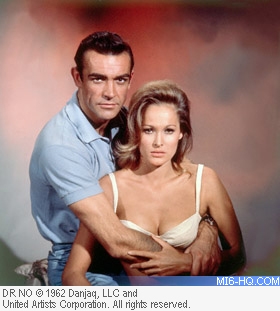 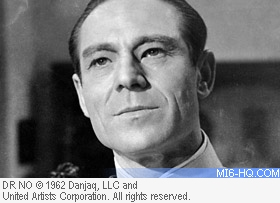 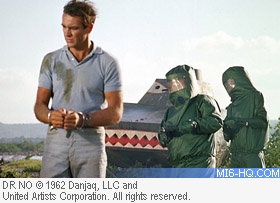 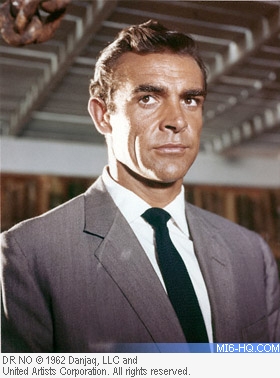 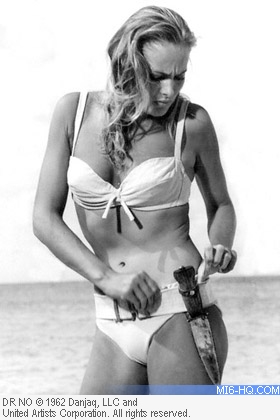 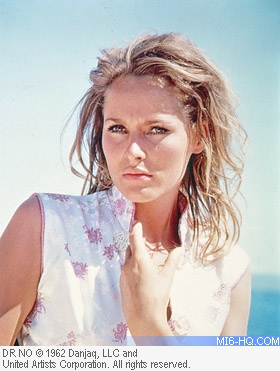 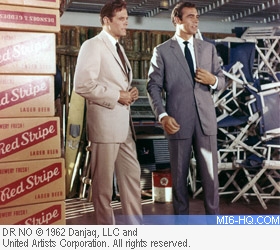 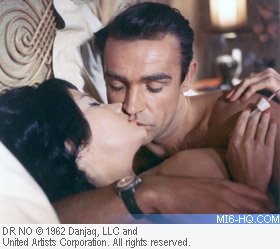 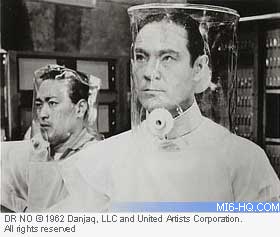