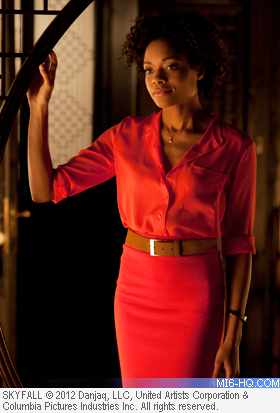 Pleased To Meet You
It is not known when Eve and James Bond first met - it is clear however that, prior to the failed Turkish data-recovery mission, they were both established field agents and therefore colleagues and that no formal introduction was made until after the "Skyfall" mission had concluded. After the Turkish mission goes sour, the pair next meet in Churchill's war bunker, as 007 pulls himself out of retirement to come to the aid of MI6 and M.

When Eve and Bond are formally introduced it is at MI6's new, less ostentatious, headquarters. Bond arrives for a briefing with M's successor, Gareth Mallory and Eve introduces herself as "Eve, Eve Moneypenny", newly appointed full-time secretary to M, having chosen to retire from field work permanently after the ordeal in Turkey.

Profile
An efficient and hard-working PA to Gareth Mallory, Eve's background as a field agent and sniper are put behind her, but not forgotten, when she assumes her office-bound role aiding MI6's new chief. She is naturally sharp-witted and ambitious, but not above some inuendo-charged banter with James Bond. The pair share a turbulent background with Moneypenny having come perilously close to ending 007's career on the failed mission in Turkey. 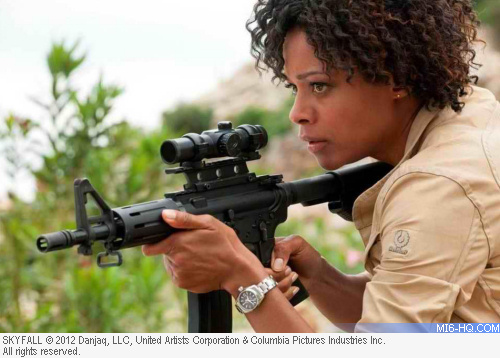 Curiously, Moneypenny showed little-to-no empathy for her misplaced bullet to 007's shoulder, but it is clear that she took on board Bond's retort that some people are better suited to fieldwork than others. She has since aided 007 on other missions, including patching things up with the old-school 00-agent with a rendezvous in Macau. It has never been made clear if the pair ever acted on their shameless flirting but rumour that a night in Macau consummated the relationship is, needless to say, pervasive office gossip.

Biography
Naomie Melanie Harris was born in Finsbury Park, London on 6th September 1976 to Lisselle Kayla, a Jamaican-born screenwriter. Harris was raised in the British capital and attended a local school before studying Pembroke College, Cambridge, for a social science degree. Beyond her studies Naomie found a passion for the dramatic arts and appeared in several local productions before attending Anna Scher Theatre School. Shunning her liberal arts degree, Harris took herself to Bristol Old Vic Theatre School, whose alumni include both Moneypennys, Samantha Bond and Caroline Bliss as well as Daniel Day-Lewis, Jeremy Northam, Miranda Richardson and many other famed British actors and actresses. 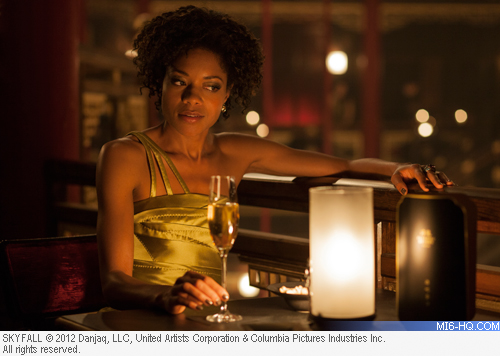 In 2004 Harris teamed up with then-current 007 star Pierce Brosnan in Brett Ratner's "After the Sunset". The film was a light-hearted action comedy about a master thief (Brosnan) who attempts to find some peace and quiet in the Caribbean. Harris played local cop, Sophie, who assists FBI agent Stanley P Lloyd who is out to catch the thief. It was whilst promoting her 2010 biopic of the Kenyan activist Jane Obinchu, entitled "The First Grader", that news first broke that Harris was in talks to play an unknown role in James Bond 23 ("Skyfall"). Whilst the producers did everything they could to mask the fact that Eve would indeed make the transformation to become M's iconic secretary, the media continued to speculate wildly about the nature of Eve's character.