Where’s your sense of adventure James? An appreciation of David Hedison by Greg Bechtloff

James Bond fans around the world were saddened to hear of the passing of American actor David Hedison last month at the age of 92.

A veteran of numerous television shows and films, Hedison’s career spanned over six decades. Famous roles included the hapless victim of the insectoid monster in the original 'The Fly' with the famous scene of him in the web wailing “Help me! Please help me!” Also notable was Hedison’s role as Captain Lee Crane in the long-running American cult television series 'Voyage To the Bottom Of The Sea.'

But for 007 fans, David Hedison holds a special place in the franchise history since he played James Bond’s erstwhile CIA colleague Felix Leiter for two separate James Bond actors. Hedison first appeared with Roger Moore in 1973’s 'Live And Let Die' and then returned to the role with Timothy Dalton as Bond in 1989’s [ltk]]. 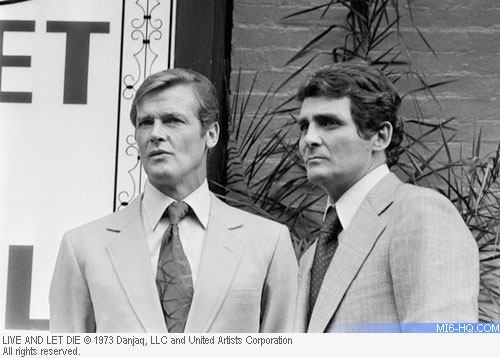 The character of Felix Leiter has varied wildly in his numerous screen appearances. The Leiter that Ian Fleming introduced in the first Bond novel 'Casino Royale' had a blonde crewcut, was a former Marine and hailed from Texas. Leiter wore his suits in the sack style of the young Frank Sinatra whom Fleming admired as a singer.

The James Bond and Felix Leiter of the novels have an innate understanding and liking of each other. In a way, they are soul brothers. They banter about cars, drinking, women, and tradecraft. The brash American Leiter though never misses an opportunity to trash lagging British standards which dear old James seems to cling to.

(Little known aside; Felix Leiter is the first person to tell James Bond about a supervillain named Ernst Stavro Blofeld. Leiter fills Bond in whilst Bond is in hospital at the end of the novel 'Thunderball'. Blofeld goes on to drastically alter the course of James Bond’s life and career.)

The cinematic Felix Leiter makes his debut with the series inception in 1962’s 'Dr. No'. New Yorker Jack Lord brings to life the first Felix Leiter. While Lord is definitely not what Fleming created, he does signify a Kennedy era company man; East coast sophistication and drive. This Leiter probably went to Yale. Jack Lord did not return for Felix’s next appearance in 'Goldfinger'. The less said about Cec Linder, the better.

Californian Rik Van Nutter next essays the Leiter role in 1965’s 'Thunderball'. While not a Texan, Van Nutter embodies everything else that Felix Leiter is supposed to be. His Leiter has the panache and American guile that matches well with the swaggering machismo of Sean Connery at the apex of global Bondmania. Van Nutter had Connery’s back. You can sense it in the scenes between him and Connery which are pitch-perfect.

Sadly, Rik Van Nutter did not return as Felix Leiter when the character next appears in 'Diamonds Are Forever'. Things regressed with Norman Burton as a flabby bureaucratic Felix Leiter.

Which brings us to David Hedison.

On his initial casting in the role, Hedison was looking forward to the idea of acting with Sean Connery as James Bond. Much to his surprise and delight, Hedison’s longtime pal Roger Moore took over the coveted role of James Bond.

Moore and David Hedison first became friends when they met at an obscure film festival in Cairo in the 1950’s. They hit it off and an enduring friendship was built. Their paths crossed again when Hedison costarred in a 1964 episode of Roger Moore’s famous television series 'The Saint.'

When Hedison and Moore appear as Leiter and Bond in 'Live And Let Die', you can subliminally sense their longstanding friendship. This subtext brings out the chemistry present between these characters in the Fleming novels.

Granted, David Hedison is closer to the Jack Lord type of Felix Leiter; an East coast sharpie updated for the busy CIA of the Richard Nixon era. This Leiter is also a family man as a wedding ring can be seen on Leiter’s hand throughout the film and not just as some continuity error in one scene.

David Hedison’s Leiter also shows just enough pique with his buddy Roger Moore’s James Bond. Their banter has enough of a friendly edge without veering into the exasperation Norman Burton had with Sean Connery. "What the hell can you do on a train for sixteen hours?"

Hedison calls out Bond’s choice of cocktail at the Fillet of Soul. James Bond should know better! A sazerac** is what a man of the world like Bond should drink in New Orleans.

Roger Moore and David Hedsion did carry on their bromance in other films. Hedison played the oil company administrator on a terrorist threatened oil rig in 1980’s 'Ffolkes”' opposite Moore’s eponymous hero. Hedison also reteamed with Moore in 1985’s 'The Naked Face'.

Felix Leiter never returned for the duration of Roger Moore’s tenure as James Bond though.

Leiter does turn up again in the guise of John Terry in Timothy Dalton’s debut outing 'The Living Daylights' in 1987. Terry harks back to a Rik Van Nutter type of Felix Leiter but is woefully underutilized in the film. 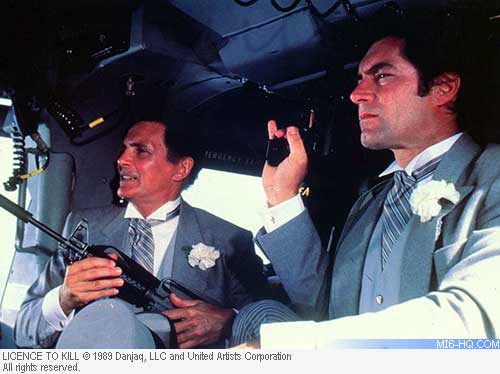 When it came time to Dalton’s encore as Bond in the originally titled 'Licence Revoked', a harder edge for this version of James Bond was planned. This suited the interpretation favored by Timothy Dalton.

The pivot for James Bond’s licence being revoked was 007 going rogue in order to avenge the maiming of his friend and colleague Felix Leiter at the hands of a drug baron. This was an updated plot point from Ian Fleming’s 1954 novel 'Live And Let Die' where Leiter endures a shark attack at the behest of negro supervillain Mr. Big.

To bring this vital Fleming element to life, the producers decided to bypass John Terry who never really seemed to develop a vibe with Timothy Dalton’s Bond in the previous film. For a Felix that was more integral to this new film, someone with more gravitas was sought.

David Hedison recounted in an interview that a chance encounter at an LA restaurant between he and his wife and Cubby and Dana Broccoli, led to Hedison being cast in 'Licence Revoked.'

Whether it was fate or a lucky coincidence that turned into a good idea, David Hedison reprised his role of Felix Leiter for a James Bond that he had no prior friendship with.

It is a testament to David Hedison’s talent that this older and wiser Felix Leiter still has an innate sense of friendship with the younger and more austere Timothy Dalton/James Bond.

Hedison’s characterization was also updated from his prior incarnation. Gone was the Nixon era company man who was already married. This time around Felix is a Reagan era Drug Enforcement Agency honcho about to tie the knot to his presumably second wife Della played by Priscilla Barnes.

The overall continuity is intact though. Leiter somberly informs his new bride that Bond was married once but something tragic happened which is best not spoken of.

Another Ian Fleming plot point is the shark maiming that David Hedison's Leiter endures at the hands of Franz Sanchez. 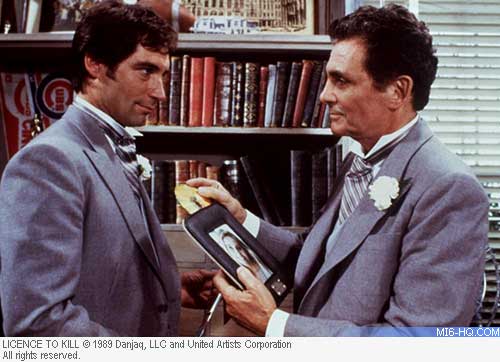 Out of all the appearances of Felix Leiter throughout the franchise, David Hedison’s Leiter is the only one to suffer the fate that the original creator wrote for this character. Hedison’s Felix is fed to the sharks and then his body is returned for Bond to find with the sick note attached; “he disagreed with something that ate him”.

The remainder of the altered title 'Licence To Kill' takes Timothy Dalton’s 007 on a different arc than the one traveled by Bond in the novel 'Live And Let Die'.

David Hedison turns up in one last scene at the hospital where he speaks to a chastened Bond on the phone. Dalton still feels for his friend as you can see on his face before he is called away. Leiter does provide a bit of foreshadowing for Bond’s return to Her Majesty’s Secret Service by passing on M’s message.

On that note, we bid farewell to David Hedison as Felix Leiter.

In fact, we bid farewell to Felix Leiter entirely in the series until the character is rebooted in the overall restart of the Bond timeline in 2006’s 'Casino Royale'.

It can now be argued that Jeffrey Wright owns the role of Felix Leiter since he has played him three times; all with the same James Bond actor. This Felix Leiter also seems pivotal to the new Bond adventure as he comes calling on a retired James Bond asking for help to locate a missing scientist.

David Hedison continued to act after his second stint as Felix Leiter primarily on American TV shows. For Bond fans, he will remain in the top tier of the many actors who have portrayed this quintessential Ian Fleming character.

On a personal note, I met David Hedsion a few times at various autograph shows in the Los Angeles area. As a Bond geek, I got his autograph in my special James Bond autograph book. Sadly though, his is another in the growing list of Bond vets in that book that are now departed.

I met Hedison again by chance at a non-Bond event. A few years ago the English stage version of George Orwell’s “1984” was on in Santa Monica. Being a fan of the book, I turned up. I clocked David Hedison in the foyer before the show started. He had a better seat than I did and throughout the show, I could glance at him as he was sitting several rows in front of me.

I thought the production was just okay and when it was over I made a beeline to Hedison. I wanted to say 'hi' before he slipped out. I got to him in the lobby. He was alone. I seem to remember he was walking with a cane. I could be wrong. Anyways, I chatted him up. He was a nice and polite man and took some time to humor me. He said that he thought the show was quite intense and good. He asked me what I thought. I replied, “well, its not Live And Let Die”. He smiled. That made my day and will remain as my own personal David Hedison anecdote.

Let’s hope that David Hedison got a “hell of a sendoff” as his Felix Leiter comments in 'Live And Let Die'.