50 years ago this week, 'Thunderball' celebrated its world premiere in Tokyo, Japan

Unlike the previous three Bond films, 'Thunderball' did not have its premiere in London. The film was first greeted by a hysterical audience in Japan, where Bond fever was reaching epidemic proportions. On December 9th 1965, the film opened in Tokyo at the Hibiya Cinema.

The reaction from the Japanese public was so positive that some commentators claim that it tipped the decision to make 'You Only Live Twice' the fifth Bond film and to shoot it mainly in Japan (instead of filming 'On Her Majesty's Secret Service', as had been originally planned).

In the meantime, the Paramount Theater in New York had been planning for OO7's arrival a couple of weeks in advance by installing a specially built viewing booth outside the theatre that continuously ran a teaser trailer for the film.

On December 21st 1965, James Bond arrived in Manhattan in style as a Bond double descended from the theatre marquee with a Bell Textron rocket belt. Unfortunately, New York City police arrested the pilot and several United Artists publicity people, as they had not secured the necessary permit! Along with many other theatres, the Paramount remained open for 24 hours a day to satisfy public demand, often with customers queuing round the block for tickets. 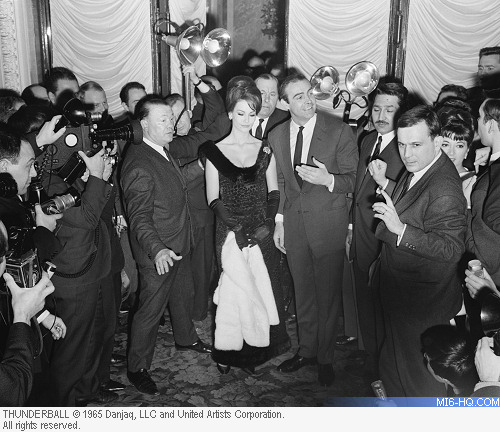 In England, 'Thunderball' had two opening galas to deal with the demand for tickets. On December 29th 1965, premieres were held at the Pavilion Theatre in Piccadilly Circus and at the Rialto Theatre just 100 yards away in Coventry Street.

Following the dual screening, a special supper party was served for the assembled guests at the Royal Garden Hotel. Members of the cast present included Claudine Auger, Adolfo Celi, Martine Beswicke and former Bond girls, Honor Blackman and Tania Mallet. Ironically, some of the key people involved with the film had to miss the festivities. Sean Connery and Harry Saltzman were among those who could not attend the event. Cubby Broccoli was still grieving from the recent loss of his mother, and was too upset to attend the screening or the supper.The evening was, nevertheless, a huge success and raised £60,000 for the Newspaper Press Fund. 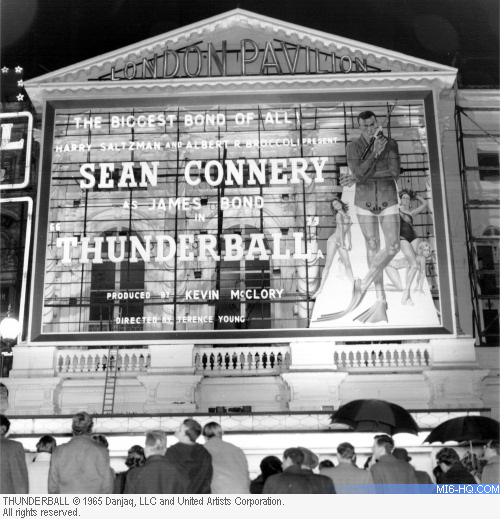 Other charity premieres were held around the world after the New Year. On February 10th 1966, Ireland enjoyed its premiere at the Savoy theatre in Dublin, with Luciana Paluzzi, Mollie Peters and Cubby Broccoli in attendance.

The success of 'Goldfinger' on both sides of the Atlantic meant that pundits were predicting record-breaking takings at the box office again, but nobody was prepared for the level of success achieved by 'Thunderball'.

The film's grosses rivaled those of the newly released 'The Sound of Music' and dwarfed those of the epic 'Battle of the Bulge'. Even a re-issued 'Goldfinger' had to stand in the shadows, with 'Thunderball' taking four times more at the box-office in its first week than all the other films combined. 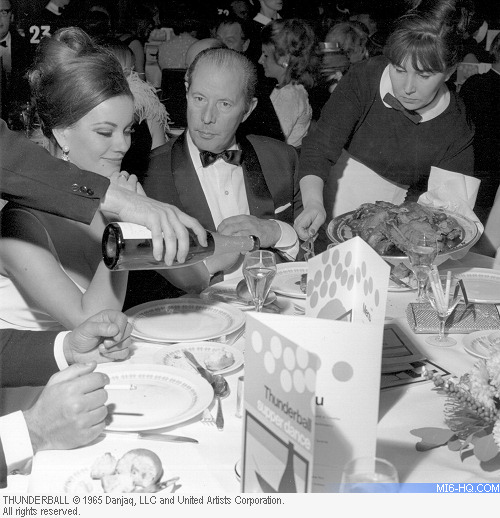 A record 58.1 million admissions were recorded in the USA (totaling $63.6 million). At the same time, Paris and Rome also reporting record takings, scooping $95,000 and $79,000 respectively in the first three days. The film eventually made $141.2 million globally, which, in 2002,was calculated to be equivalent of roughly $950 million, taking inflation into account.