Matthew Field visits the The Salisbury Museum, whose exhibit on the life and work of illustrator Richard Chopping opens today

This summer, The Salisbury Museum in Wiltshire, celebrates the life and work of writer, illustrator and teacher Richard Chopping (1917 – 2008), best known for illustrating the jackets of nine of Ian Fleming’s James Bond novels.

Once described by The New Yorker as the best-paid jacket designer in the world, this exhibition examines Chopping’s entire output, positioning his work for Fleming firmly within the context of his 40-year career. Curator, Jon Lys Turner, gave Ajay Chowdhury and I, a preview of this incredible collection, which is on display until October. 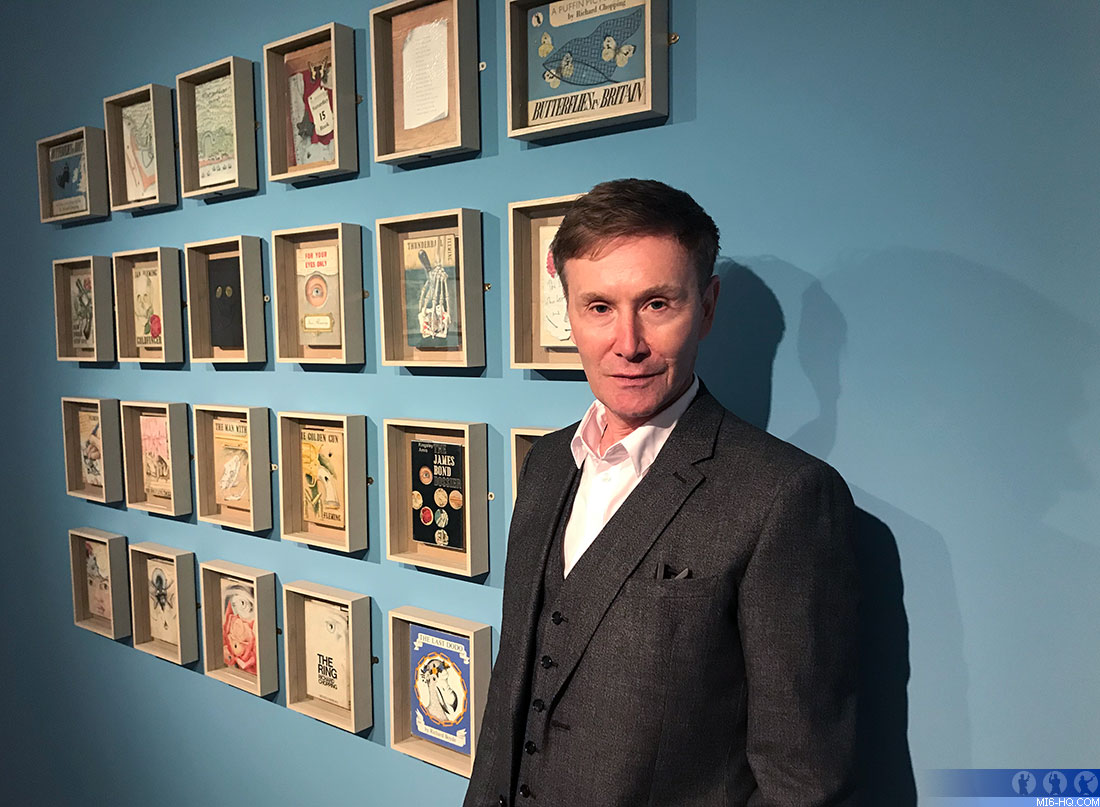 Turner first met Chopping in 1981, shortly after beginning his master’s degree at the Royal College of Art. The pair developed a close friendship that would last until Chopping’s death in 2008. “Dickie became my mentor and I was lucky to become a beneficiary and an executor of his will and among the possessions that he left me were lots of memorabilia connected to Bond.”

For the past decade Chopping’s collection of original art remained in boxes and large plan chests before Turner was able to archive it properly. “There was so much stuff there and some of the art you see here today I only found four weeks ago. I showed a sample of the collection to the directors of Tate Britain, who examined it and advised me, that what I had was a really valuable archive and an important part of art history.” 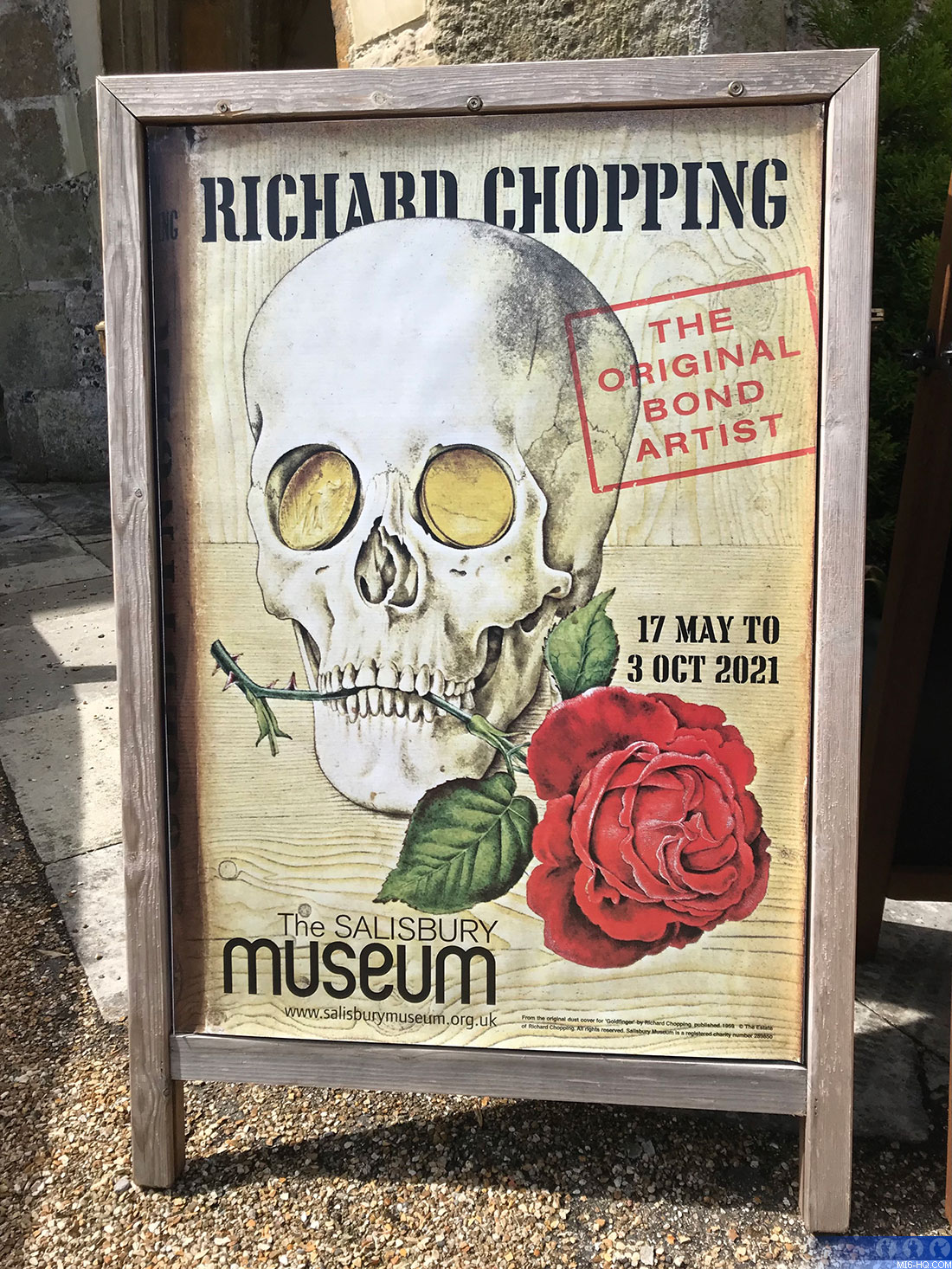 Chopping was a master of the trompe-l'œil technique: realistic three-dimensional images, which question the boundary between the painted world and ours. It was this distinctive style that led him to be commissioned by Ian Fleming. As we enter the Bond room, Turner describes the successful working relationship that Chopping and Fleming shared, “Dickie wrote that he would never dare suggest how Fleming wrote his novels and after a few push backs, Fleming would leave the art work to him. I think Fleming is quoted somewhere of having said much the same. Of course that didn’t stop him asking for the trompe-l'œil to contain ‘everything bar the kitchen sink’ but Chopping was strong enough, and not afraid to stand up to Fleming.” Turner highlights that their introduction was made by Francis Bacon; “which in my opinion, helped balance Chopping’s status with the very famous, very powerful Fleming.”

Turner leads us to the original working drawings of the striking skull and rose design for 'Goldfinger', one of Chopping’s personal favourites and a commission, that Turner tells us, had been declined by his former friend and subsequent arch-rival, Lucien Freud. As well as working from still life, Chopping would work from photographs and Turner points to a collection of polaroids of the skull that Chopping used for the painting. “It’s interesting Bacon got involved in the artwork for 'Goldfinger' because there is a note from him to Chopping about how he thinks Dickie should work with the skull.” Displayed alongside the art is Chopping’s hand written notes, which reveal he borrowed the skull from a local named Dr Kershaw. “In those days skeletons like this were used for educational purposes. Chopping later found out this was the skull of a Malaysian woman and he was not happy to discover she had most probably been the victim of genocide.” 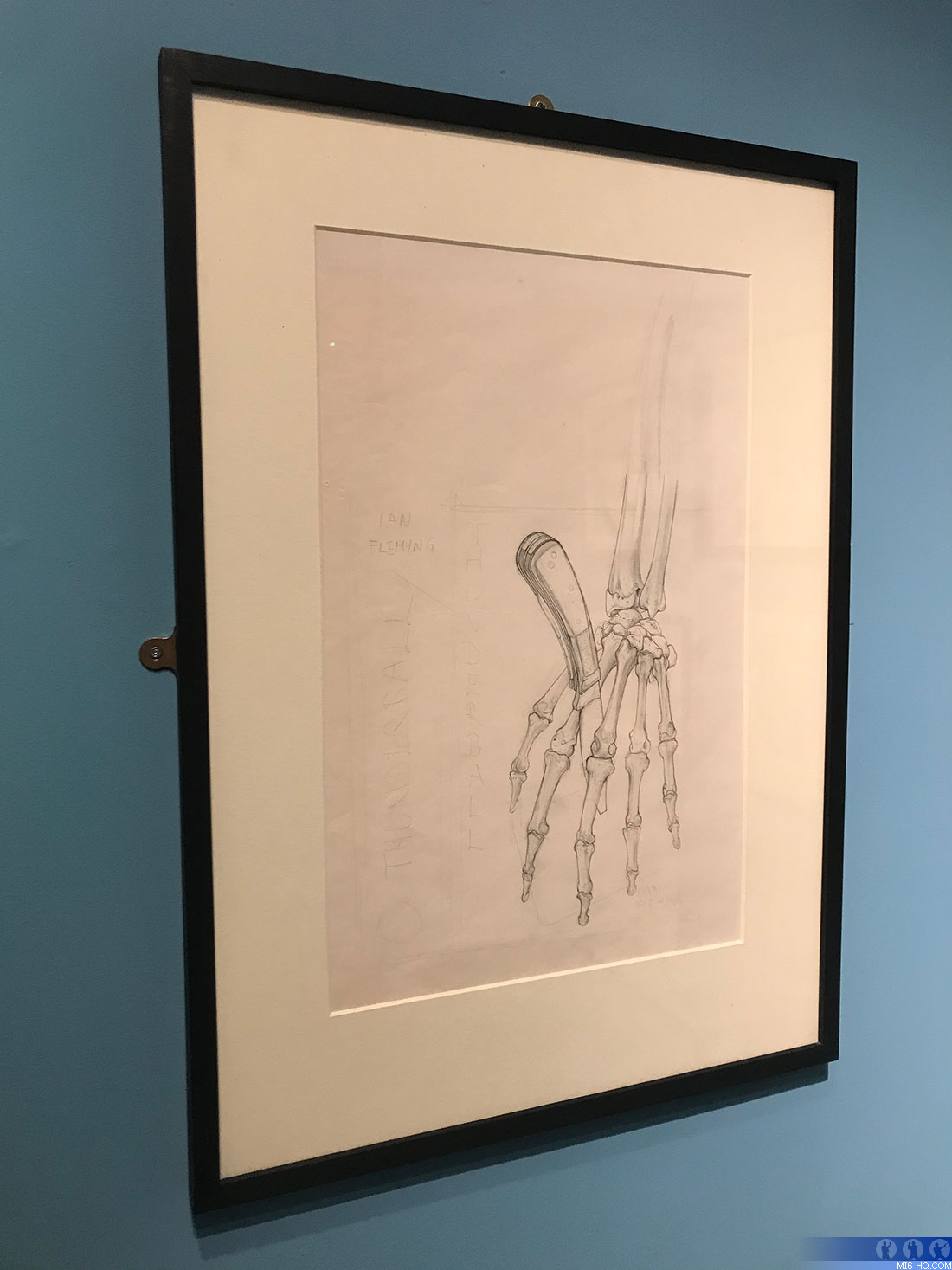 One of Chopping’s signatures was the image of a fly, which can be spotted on his art for 'The Man With The Golden Gun' and 'Octopussy'. Displayed in the exhibition, pinned to a piece of cork, is the preserved insect that Chopping used as reference for these jackets as well as many of his non-Bond works. Turner also amusingly reveals the story behind the toad featured on the cover of 'You Only Live Twice'. “Dickie put on his Wellingtons and waded trough marshes and gardens but couldn’t find one. One his friend’s daughters borrowed a toad from the science lab at school and Chopping would draw it at night and return it for lessons the next morning. He had it under a bell jar but he said it started puffing up as though it was going to die so he released it from under the glass and it started jumping all over the studio!” 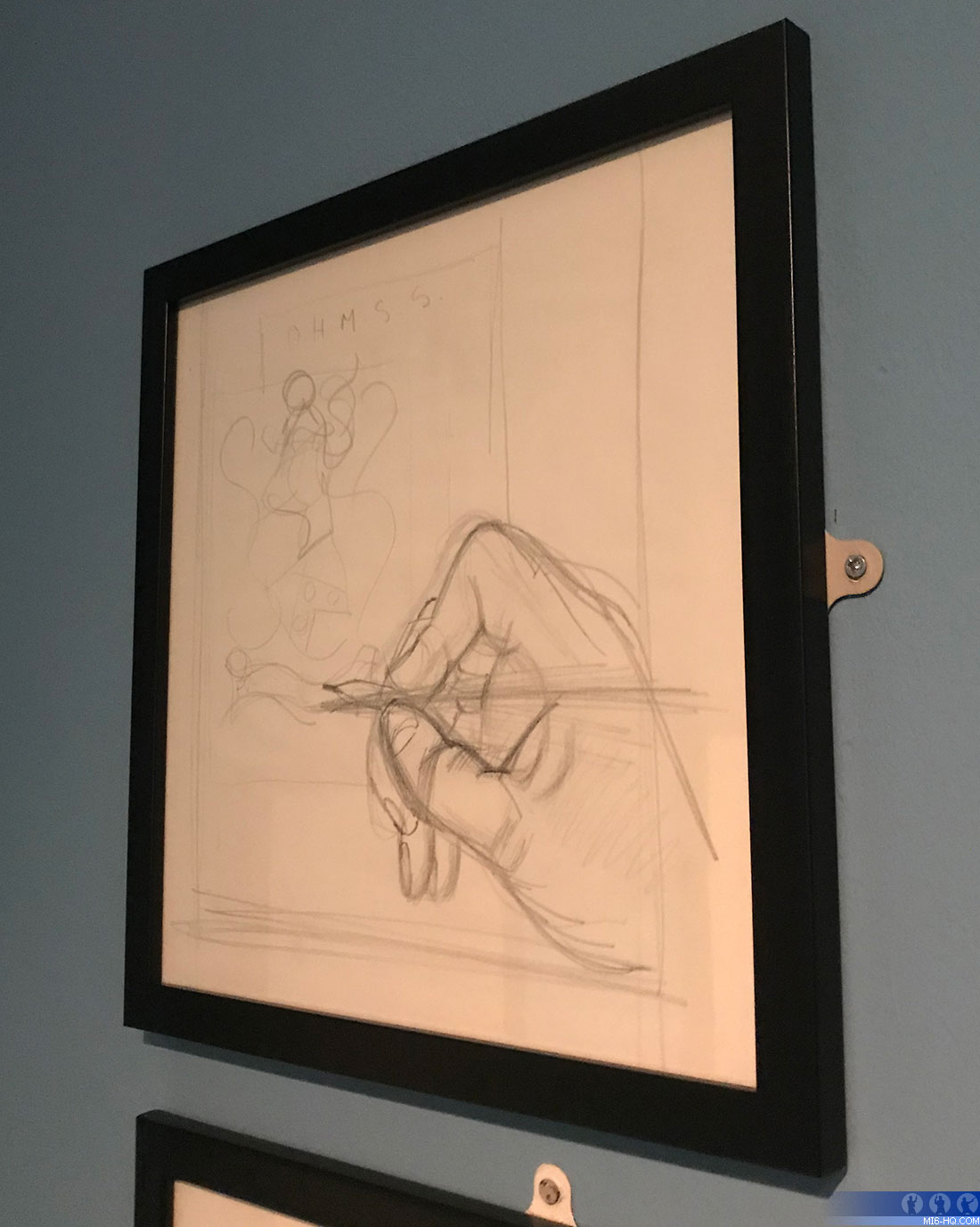 The story behind the artwork for 'On Her Majesty's Secret Service', the image of a pencil sketching James Bond’s coat of arms, is particularly interesting. “What Fleming wanted was the idea that an artist was working on a drawing board with three pins in the piece of paper with the fourth corner curled over creating a shadow. In Chopping’s notes it is revealed that he pushed back on Fleming and said no artist would have worked like that.” Turner describes the many attempts Chopping made to perfect the image of the hand, “Dickie took loads of photographs of his own hand which you can see displayed here and drew it many times before he got it right. Isn’t it the old cliché that artists often struggle with drawing hands?” 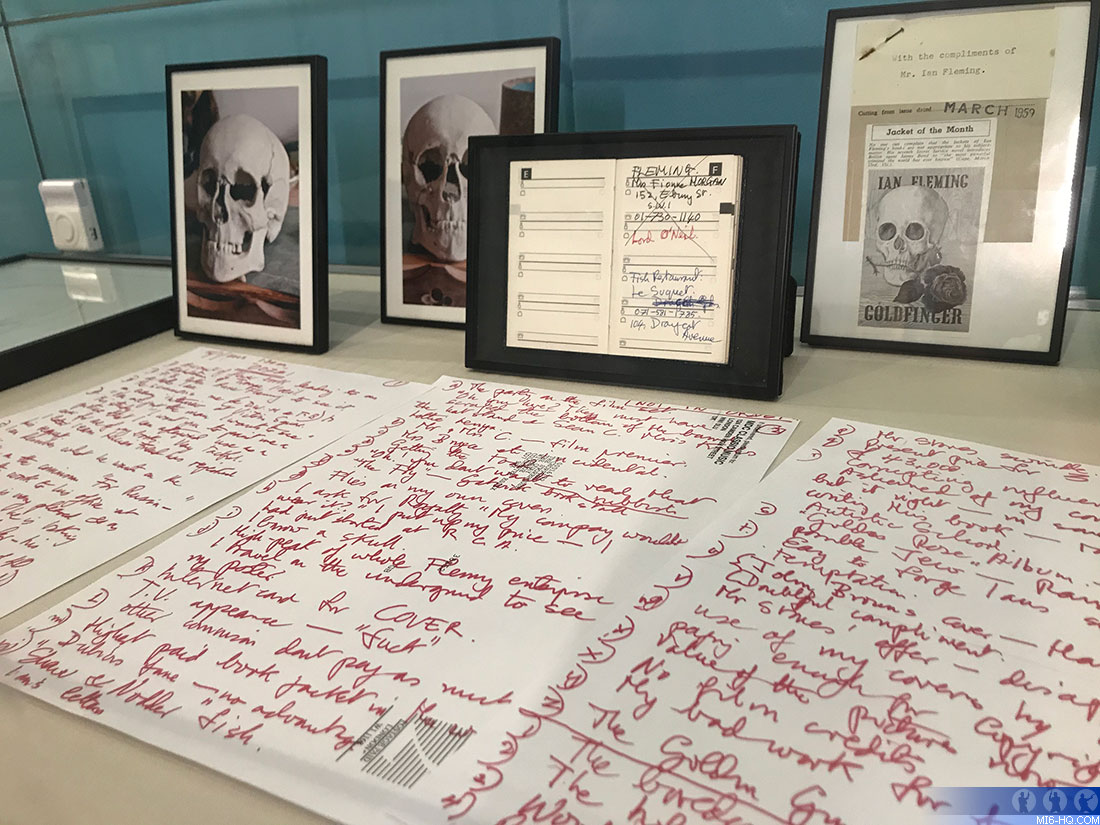 For all Fleming and Bond scholars, RICHARD CHOPPING: THE ORIGINAL BOND ARTIST is highly recommended. This exhibition is not only a treasure-trove for the Chopping cognoscenti but also those discovering his work for the first time. The collection reveals a talented artist whose work should perhaps be as prolific as the fictional spy he helped make famous.