One of the most recurring characters is rarely seen, but often mentioned

When James Bond lands M in hot water, it is often with an exasperated tone that the head of MI6 fears a phone call from an irate Prime Minister. It has been a long-running motif in the film series, but only once do we get to see the PM and it is in an unusually good mood. In reality, the head of MI6 reports to the Foreign Secretary, not the Prime Minister, but this oblqiue detail is skipped over for dramatic purposes.

The Prime Minister is first mentioned in 'Thunderball', when he is unable to attend the briefing of the double-o section.

Home Secretary: "Gentlemen, the tape that you are about to hear was received at 10 Downing Street this morning."

M explains that the PM has agreed with the US President to pay the ransom if the bombs cannot be recovered, and that he has personally tasked the Double-O section with that attempt.

The PM pops up in conversation in the follow-up, 'You Only Live Twice'. At a meeting between world leaders, the British convey to the Americans and Russians that the Sea of Japan should be the place to hunt for the space capsule hijackers.  "The prime minister asked me to assure you this is what we propose to do. As a matter of fact, our man in Hong Kong is working on it now." And later, "We assume it's Japan. All this is guesswork, but the PM wants us to play it with everything we've got." 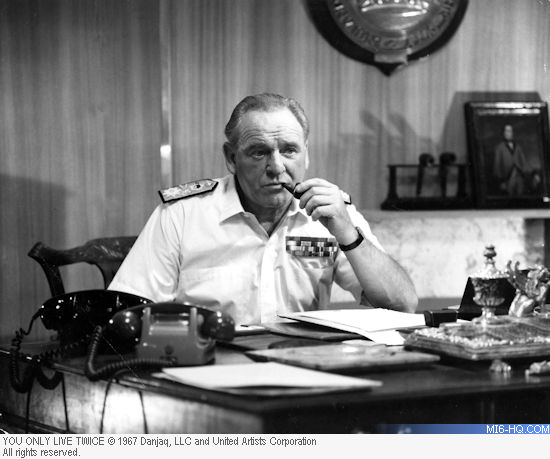 Bond's hunt for Blofeld is also on the mind of the PM in 'On Her Majesty's Secret Service' with M expressing concern about the lack of results: "Number Ten's making ugly noises about Operation Bedlam... The PM wants to be informed personally when we find 007."

Bond makes several mistakes in 'The Man With The Golden Gun' and a furious M is indignant about having to report up the chain. When it is  suggested Bond go in to Chinese territory on the hunt for Scaramanga, M huffs: "If the PM gets to hear of this, He'll hang me from the yardarm."

In 'The Spy Who Loved Me', M is personally called by the Prime Minister to kick off an investigation in to another hijacking - this time of nuclear submarines.

M: "Yes, Mr. Prime Minister. I understand the gravity of the situation. Yes, I'll put our best man on it at once."

By the time 'For Your Eyes Only' hit screens, Margaret Thatcher had been elected as the first female Prime Minister and it is referenced twice in this film. After Bond's quest for answers hits a dead end thanks to Melina, Tanner and the Minister worry about passing on the bad news.

Tanner: "You were meant to question Gonzales, not let Miss Havelock perforate him."

Minister: "We'll have to tell the Prime Minister Operation Undertow is dead in the water.  She'll have our guts for garters!"

With the mission complete and the ATAC safely out of Soviet hands, Q tries an audio link with Bond to Number 10. Director John Glen added this humorous coda to the end of the otherwise quite serious film and hired impersonators Janet Brown and John Wells to play the parts of Margaret and Denis Thatcher in a domestic setting within Downing Street. 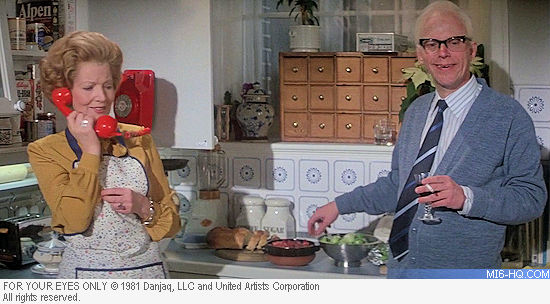 Minister: "Patch in the Prime Minister."

Prime Minister: "Mr. Bond! I wanted to call you personally and to say how pleased we all are that your mission was a success.

Prime Minister: "Don't thank me, Mr. Bond. Your courage and resourcefulness are a credit to the nation. Denis and I look forward to meeting you. Meanwhile, if there is anything I can do for you..."

The PM is next mentioned briefly in 'The Living Daylights' when the Minister has to report on Koskov's supposed recapture by the KGB at the safe house. "Well, l must be off. Meeting with the PM this afternoon."

Pierce Brosnan's hiring also brought in a new M, played by Judi Dench. Her tenure as M would have less convienal relationship with the PM. Starting with 'GoldenEye', it is made clear that M has to answer directly for her department's performance.

Tanner: "The prime minister's waiting for an update."

Shortly after Tanner updates Bond and M about Severnaya, she reveals to 007 that the PM has "talked to Moscow. It was an accident on a training exercise," to which Bond retorts, "Governments change. The lies stay the same."

In the following film, the villain is himself in contact with the PM, demonstrating the power the media has over politicians. 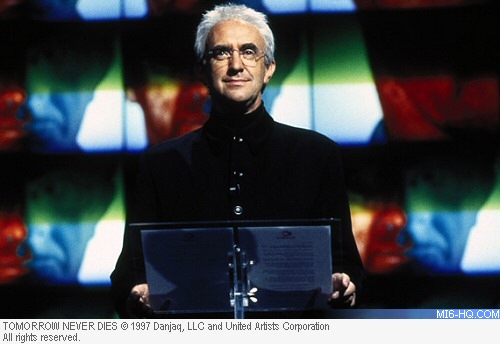 Elliot Carver boasts in his satellite launch speech that he has "spoken with the prime minister in London and the chairman in Beijing and have offered my services." M is fearful of Bond going after the media mogul. "The PM would have my head if he knew you were investigating him."

Daniel Craig's era also kicks off with M mentioning her relationship with the PM. After emerging from a parliamentary hearing about Bond's actions, she vents: "Who the hell do they think they are? I report to the prime minister, even he's smart enough not to ask me what we do." 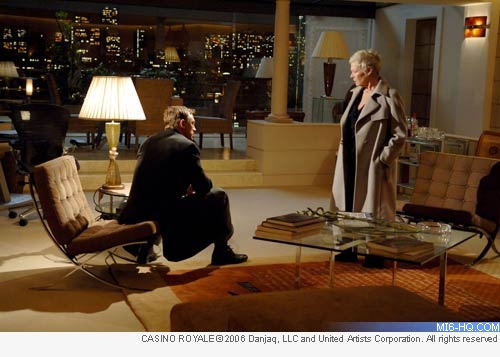 The muddy world of politics would be centre stage in 'Quantum of Solace', when Bond discovers that a close ally of the Prime Minister is part of the Quantum organization. 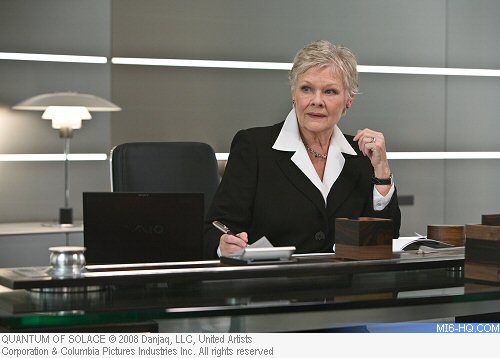 When things go from bad to worse, M is called into the Minister's office to be told that Bond is a liability.

Minister: "I don't think I need to tell you how upset the PM is."

M: "With respect, the PM has my direct line."

Minister: "And he'd have used it if he'd wanted to speak to you. I'm sorry, M. Things have changed."

The sub-plot of Guy Haines was dropped in the edit, but a version of the final scene made it in to the videogame.

Assuming it was the same PM by the time of 'Skyfall', he was keen to have a change of leadership at MI6. With the list of NATO agents out in the wild thanks to a blundered operation in Istanbul, Gareth Mallory calls on M to account for her department's failings.

Mallory: "I'm sorry to have to deal with such a delicate subject at our first encounter. But, um... I have to be frank with you. The Prime Minister's concerned."

When the identities start to be leaked on the internet, BBC news reports the public line that "The Prime Minister continues to express public support for MI6, while the opposition has taken the position..."

M: "...Has taken the position we're a bunch of antiquated bloody idiots fighting a war we don't understand and can't possibly win. Look, three of my agents are dead already. Don't embroil me in politics now.

Mallory: "The Prime Minister's ordered an inquiry. You'll have to appear."

M: "Oh, standing in the stocks at midday? Who's antiquated now?" 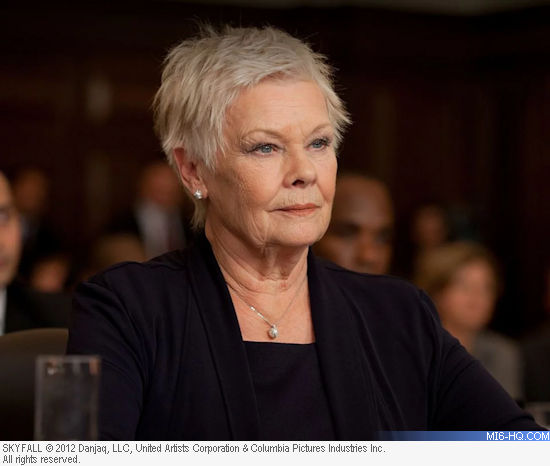 When Bond and M hit the road to Scotland, Q and Tanner are unsure about Mallory's allegiances, but he orders them to assist.

Tanner: "But what if the PM finds out?"

Mallory: "Then we're all buggered."

Following M's death at Skyfall, Mallory is promoted to head MI6 and the Prime Minister probably breathed a sigh of relief. But it was short-lived as just two film's later, Mallory was also having to juggle the PM in 'No Time To Die'. When the Heracles weapon is stolen, M first tries to cover it up.

Moneypenny: "Shall I alert the PM--?"

M ignores the PM's calls when trying to get hold of 007 (Nomi) and ends up talking to Bond. Seeing that the new M is also in hot water with the PM, Bond questions his judgment. Later when it is discovered the weapon has been modified, M is forced to admit it was an off-the-books project.

M: "It was never intended to be a weapon of mass destruction. It was a... I need to call the Prime Minister." 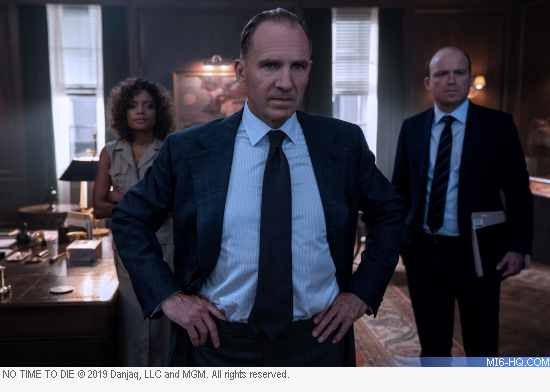 After Heracles is destroyed, M seemingly survives the political firestorm.

M's relationship with the PM has changed over the years, starting as a happy recipient of orders for the Double-O section during Conery's tenure, but then pivots to fear of embarrassment when Bond screws up through Moore's films. The muddy world of politics starts to creep in to the M / PM dynamic during Brosnan's run, and hits peak animosity during Craig's films, culimnating in what would have been M's forced retirement in 'Skyfall'.