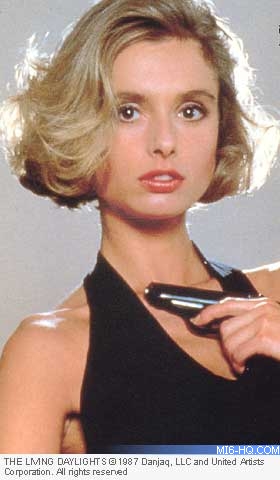 PLEASED TO MEET YOU
Bond first spies Kara Milovy on a mission in Czechoslovakia. The lovely girl with the cello appears at the window with a snipers riffle to make her boyfriend's defection to the west look real. Bond eventually catches up with Kara at her ransacked apartment. She quickly believes a story 007 spins for her, claiming to be a friend of Koskov - Bond is actually hoping he can learn more about the Soviet General's mock defection.

"We have nothing to declare!"

CAUGHT IN THE ACT
007 quickly earns Kara's trust with his cover-story, and the romantic ties quickly strengthen between the pair. She is at first reluctant to believe Koskov is a traitor to both Britain and the USSR, but when convinced otherwise Kara will stop at nothing to assist Bond on his mission. When the Koskov affair is thoroughly wrapped up, Bond attends Kara's cello recital at Carnegie before congratulating her personally in her luxurious dressing room. 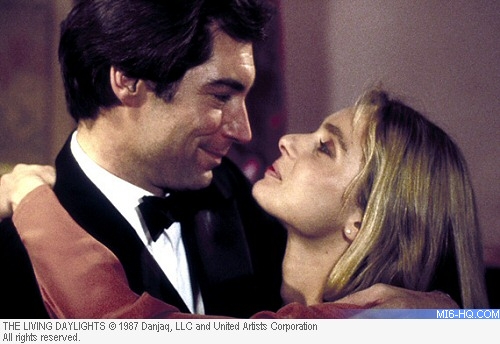 PROFILE
The sweet and talented Kara Milovy is sucked into the world of espionage when her boyfriend carries out a sly get-rich-quick scheme, betraying both the Russians and the British. She is initially emotional and suspicious of 007's scheme to track down Koskov but as they journey from country to country on the tail of the rogue General, Kara proves to be a breath of fresh air for 007 and quickly falls for the British agent.

Kara's dream is to be a world-renowned concert violinist and at the end of the mission, with the help of the Secret Service, she is able to lead an orchestra at Carnegie Hall, New York. Kara was put in the firing line after agreeing to shoot blanks at Koskov, making his defection to the British look genuine. Luckily, 007 - who is protecting Koskov - recognized her lack of marksmanship and only grazes the lovely cellist. 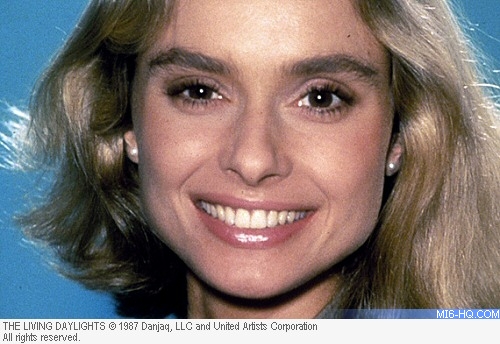 BIOGRAPHY
Born in 1960 in London to a Georgian mother and Dutch father, Maryam d'Abo grew up traveling across Europe wherever work took her family. Since the young age of eleven, d'Abo has claimed to have wanted to be an actress. After school, she studied at the London Drama Centre and during her time at college, found work as a model.

Her first on-screen role was in "Xtro" - a 1983 brutal cult sci-fi. She would go on to have a host of bit-parts in film and television, including the Karen Allen starrer, "Until September" (1984) and Taylor Hackford's "White Nights" the following year.

In 1984, d'Abo auditioned for the role of Bond's foreign contact, Pola Ivanova in 'A View To A Kill'. Ultimately she lost out to Fiona Fullerton, but a young Barbara Broccoli admired d'Abo's natural talent and invited her back to an audition for the following Bond picture, this time starring Timothy Dalton.

D'Abo was introduced to the world of James Bond on 5th October 1986 with a press conference, where she and Dalton fronted up to a slew of reporters and flashing cameras. She came to Hollywood attention with her role as the aspiring cellist, Kara, and further promoted the picture by appearing in a Playboy spread, timed to coincide with the film's release.

After her brush with Bond, d'Abo went on to star in "Something Is Out There" a short-lived sci-fi adventure series. She had a steady run of films in the 1990s including "Tropical Heat" and a notable guess-role in the black-comedy "Tales From The Crypt". She worked opposite French actor, Gérard Depardieu in 2004's "San Antonio" and more recently appeared in the alternate horror flick "Tresspassing".

In 2003, d'Abo married acclaimed director Hugh Hudson and in 2005 she headed up a new documentary, "Bearing Witness", focusing on female journalists working in disaster and war zones.