Following a trail that leads from the canals of Holland to the neon streets of Las Vegas, James Bond uncovers a plot by Blofeld to use the world's supply of diamonds to create a high powered laser satellite capable of destroying any target on earth, and it's aimed at Washington.

After killing Bond's wife in the previous film, 007 wants revenge on Blofeld. In the first scenes Bond aggressively extracts information from several people on the whereabouts of his nemesis. Meanwhile, Blofeld is performing plastic on a goon. When they leave, 007 makes his entrance disguised as a guard that he earlier dispatched. Bond is attacked by the mud bather and triumphs, only to be met with Blofeld and his two guards. After some pithy dialogue, a fight ensues and once again Bond is victorious. The two guards are dealt with he gets his time alone with Blofeld. After tying him to a stretcher, Bond pushes him into the mud pit and leaves.

The title is taken from Ian Fleming's fourth novel. Although diamonds are central to the plot of the film, the title is never mentioned. However, the phrase is used in dialogue in the 2002 film 'Die Another Day'.

One of the moon buggy's wheels falls off mid-chase.

Connery's return. Tempted back into the Bond role for a then record sum of $1.25m plus a percentage of the profits. He donated the entire sum to his Scottish International Educational Trust.

There a four significant scenes which were cut from the film:

The "Inside" DVD documentary contains an alternate version of the death scene of the Dentist. Instead of putting the scorpion into the doctors shirt, Mr. Wint puts the scorpion in his mouth. 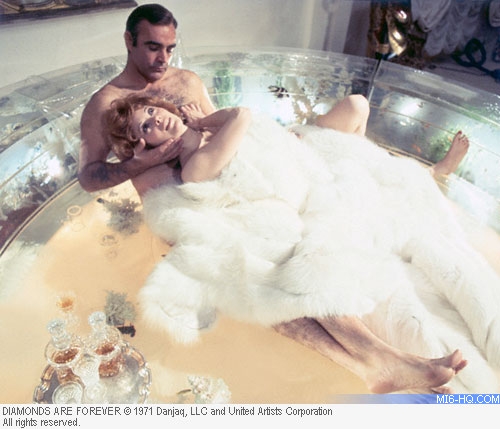 The TV version aired on ABC on March 2nd, 2002 was digitally altered. Dark bra straps were placed on actress Lana Wood's originally naked back, and her formerly tan panties were digitally coloured to match..